Over the summer, while the rest of his teammates were skating and building up their conditioning in advance of the upcoming season, Kevin Gravel knew something wasn’t quite right with his body. He was heading in the opposite direction: workouts had left him particularly drained and gutted, and he had lost much of his appetite.

Gravel gauged that he lost roughly 40 pounds at one point over the summer, including a three-day stretch in which he estimated his weight dropped by 20 pounds. During the end of his unchecked weight loss, he underwent tests and bloodwork, and, ultimately a colonoscopy, an MRI and a CT scan, and received an alarming but treatable diagnosis. He has Crohn’s disease, a chronic inflammatory bowel disease characterized by inflammation of the digestive or gastrointestinal tract. It most commonly occurs at the end of the small intestine (verbiage courtesy of crohnsandcolitis.com), and while it is treatable and manageable – even today, Gravel says that he feels “100%” – it can not be cured.

During this period, Gravel kept his wits and his attitude with him, and even on Wednesday in the Kings’ facility, retained a sense of humor about his ordeal. “How detailed do you guys want me to get?” he asked, smiling.

Listed at 6-foot-4 and 212 pounds, Gravel, whose recall was officially announced today, shared great personal detail about his health scare, which significantly affected his ability to condition himself for the 2017-18 season after having broken through with one goal and seven points in 49 games on Los Angeles’ back end one season ago. More importantly, he’s comfortable, he’s healthy, and he showed good resilience when discussing his rebound from a highly uncomfortable and draining episode in his personal life. 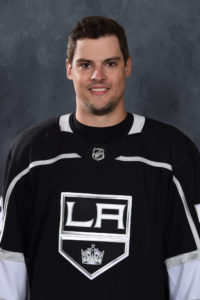 On the Crohn’s disease diagnosis, and how he battled through his mid-summer health scare:
I had other complications that come along with it that I had to deal with, which set me back, too. I spent some time in the hospital dealing with that. Once, at my lowest point, I was down, I think, 40 pounds. I missed about a month, a month and a half of training, probably, and I wasn’t able to get on the ice until after this whole thing hit me, so I didn’t get on the ice until … the end of July, maybe, the beginning of August. After I got on the medication – the stuff they got me on clicked instantly – within the next couple days, I started feeling night-and-day better. It’s obviously gradual, because you have so far to come from your lowest point – so far to come to get to where you’re feeling good. But, within like two weeks after starting my medication, I was able to out and about and going through my day, normal day-to-day operations and all that, so I was feeling good that way. I was just kind of letting everything heal before I could get back into the rigorous training and all that. When you lose that much weight, you lose a lot of strength and conditioning and all that, and it took a little bit to get my strength back. It was [harder] for me to get my conditioning back than my strength. At the start of the year, I was still working on that. Even down in Ontario a little bit, the first couple games I still wasn’t really where I needed to be, but it happens. It’s a tough blow, but I had a lot of help, too. My girlfriend was a huge help for me this summer. My family – I have a lot of family around Minneapolis, and my mom and dad came down a couple times, so I had a ton of help. The medication worked great, the doctors were great, so I feel great now. Like I said, I felt healthy very quickly after starting the medication. I feel healthy, I feel 100% strength-wise, conditioning wise-now from probably about a week or two or three weeks into the season. So, I feel good now. It was just an unfortunate thing to deal with, but the big picture is there are a lot more issues I could’ve been hit with. At least this one’s able to be manageable and controlled. At the time, it was a tough thing to go through, but it’s all good now, and it could be worse. It could always be worse.

On any prior inklings that he might be dealing with a serious illness:
Not to me. I mean, even last year, I felt healthy all year. In the beginning of the summer I felt healthy. The entire summer, and then I just started losing my appetite a little bit and was real lethargic – not really wanting to do anything. I’d get home from workouts and just be gassed and not be able to do anything. So, at the urging of my girlfriend, she’s like, ‘you need to get in and get something looked at one way or another.’ Just figure out, maybe you need an antibiotic. You’ve got something, right? So we went in, and obviously it was a little more than that, but it kind of all hit me at once, which was the unfortunate part. I had a few complications that came along with Crohn’s disease that are side effects that not everyone gets that I ended up having to deal with. But, like I said, the doctors were great, my support system was great, and once that medication started, I started coming back to the positive side of things and it started feeling good again, and then I was able to get back into the gym and back on the ice and trying to get ready to go. Like I said, I’m having no issues with it now. Everything’s completely controlled, I feel 100% healthy, I feel great on the ice, so it’s good.

On whether he is still currently on medication:
No, I am. I am on medication right now. Everyone’s different, I guess, but as far as I know, you’re on medication for the long haul, I think, because it’s a disease that can’t be cured. It’s just managed and controlled. Like, right now, mine’s controlled. I had to change my diet a little bit, but nothing that would make you notice anything one way or the other. So, I can do literally everything. It’s like I don’t have it. The thing you just have to watch out for is making sure nothing flares up, and when you see a sign of a flare up, take care of it right away, and luckily, I haven’t had to deal with that at all so far, knock on wood. Like I said, everything since mid-July, end of July has been everything going in the right direction. I feel 100% right now.

On whether he was able to return to his preferred playing weight:
I put the weight back on. It [originally] was probably not as great of a weight as it normally would be. It was a little softer than usual, and I was on stuff that helped me gain the weight back quicker, and all that stuff, too. Like, right now, I’m 210-ish. And that’s what I was at last year – 210, 212. It varies. I’ve always been fluctuating weight-wise. It was a scary scene, probably more so for my girlfriend, because she left for a couple days and then came back when I had my big weight loss. I lost probably 20 pounds in the three days she was gone, or whatever it was. She came back and was like, ‘what happened to you?’ “I don’t know.’ It was probably harder on her than anything. She was my support system, and my mom and my dad and my family. I had a lot of family in the Minneapolis area, too. They were all a huge help. Made me meals, came and visited with me. … Like I said, it could always be worse. It’s unfortunate it happened, but it’s fortunate that it can be controlled and I can still do day-to-day things and feel 100% and still play at a high level in a professional sport. I’ve had no issues with that after getting back my strength and getting back my conditioning. Everything’s been feeling like it always has, so everything’s been good.