Teach Me (feat. Drew Doughty): Dealing with the media 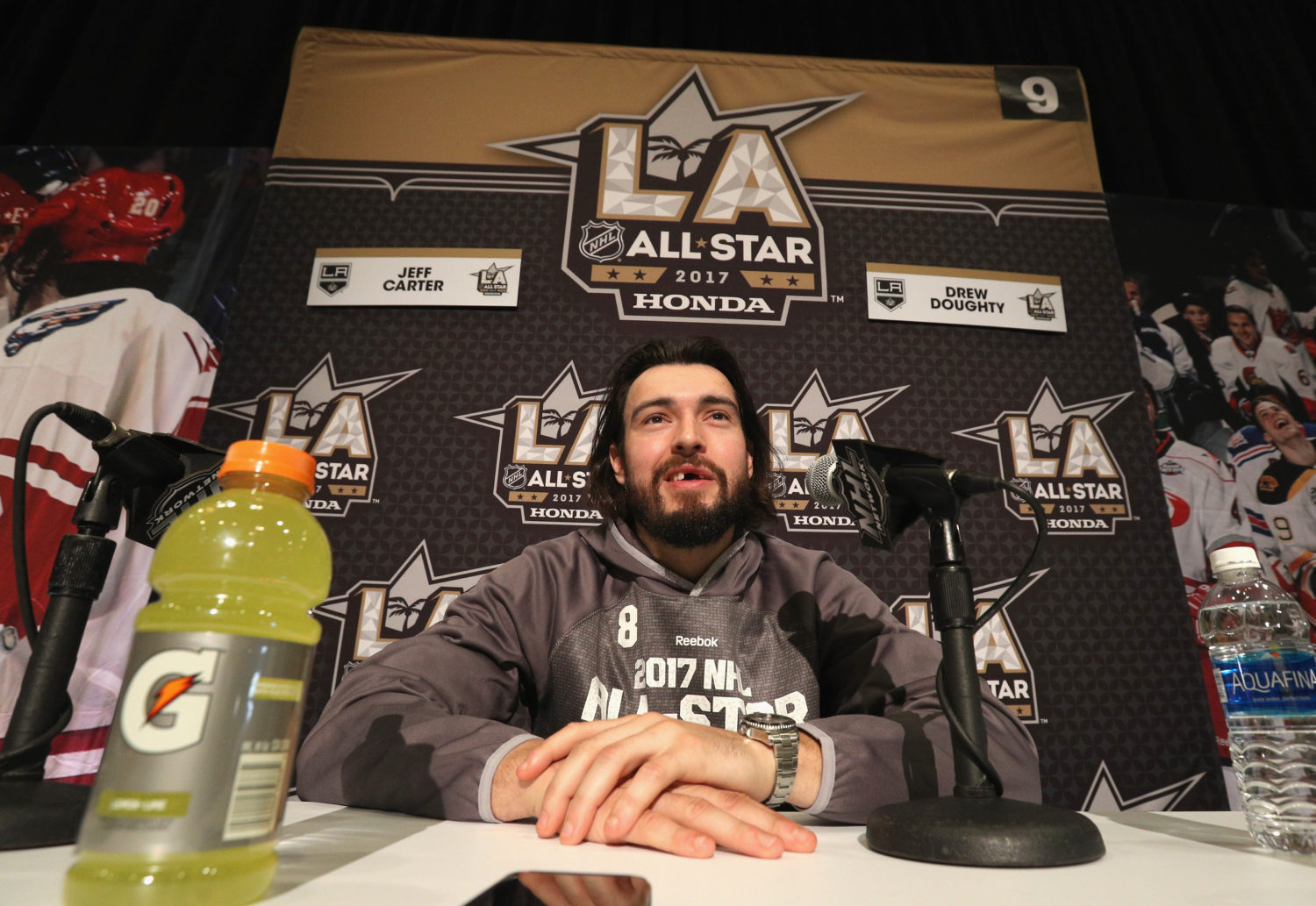 Handling the media! This is a very broad topic. Please allow me to break some news: “media” isn’t really represented by a figure wearing a trench coat and a press credential tucked into the band of their fedora these days. When the LA Kings open up their dressing room at Toyota Sports Center or at Staples Center, there may be print reporters, digital reporters, columnists, national reporters, broadcasters, team staff, invited guests, et cetera, et cetera. And, obviously not everything reported by the media is learned in this availability. There are follow-ups – emails to management, to agents, to other figures – to complement what has been shared in the room, gleaned from recent play or learned through outside reports or correspondence.

On game days this is sped up a bit, but on a typical practice day, a public relations figure will deem the dressing room to be “open,” and there’s a group of anywhere from a small handful to dozens (if we’re in particular Canadian markets) of media types entering the room, approaching players they need to speak to, awaiting their turn whilst in a scrum, asking their question, and then moving on to another player until enough time has elapsed and the coach emerges from his office to answer questions.

But this is just the perfunctory explanation of how the media does their job. What about the player perspective? What about the coach perspective? It’s not always a two-way street; reporters ask very difficult, often personal questions, but it will usually reflect worse on the behavior of a player if they throw a question back in the reporter’s face than it reflects on the reporter when they ask a poorly constructed or uneducated question. There was an episode late last week in which Randy Carlyle was asked about his job security and issued a profane rebuttal that was widely and accurately deemed to be uncouth. That wasn’t fair to the reporter, who was doing their job and asking a question that was absolutely germane to the topic on hand. And not quite to the degree as the pressure on the players or coaches, forums like Twitter also allow the ticket-purchasing public to put a little bit of pressure on reporters to ask the tougher and more uncomfortable questions.

“I always feel that the media have a job to do. They’ve got to ask some questions sometimes that you don’t want to hear,” Willie Desjardins said. “I just believe if you treat them right, they’ll treat you right. It’s just a respect thing. They also give you a chance, sometimes, to give your side of the story, too, which is good to get out there. … I don’t always agree with it, but I think overall, it’s fair. I think it’s really fair.” 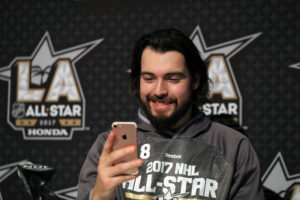 Meeting with the media isn’t the favorite part of a player’s duties, but even amidst the more emotional moments in the immediate aftermaths of games, they also understand that reporters have jobs to do and can even be helpful in telling their own important personal stories and, of course, are the ones voting on league awards.

Drew Doughty, beautifully honest and blunt, is aware of that.

“I think definitely in the past I may have kind of preached to media members how upsetting it was to me to not get considered in Norris votes, and I do think that helped me a little bit, because they, for one, realized I probably should get it, and two, I’m always good to the media, so maybe they’re trying to help me that way, too,” he said. “I don’t know. Maybe I kind of did that once, but, no, I don’t really try to use the media in any sort of way. I’m definitely not trying to look like a jerk when I’m talking to the media, but I can be.”

These players are remunerated handsomely, so it’s not as if they’re dealing with a daily burden that we should empathize with. But it did provoke an interesting conversation with Los Angeles’ most gregarious and interesting player who always shares his time with those who have questions.

Drew Doughty, on his general approach towards answering questions from the media:
I think just always try to be available. If you’re always available, I think the media obviously appreciates that for one, and it makes you look good, and then hopefully the media doesn’t [—-] on you later. That’s one of them, for sure. I’m a guy that’s going to speak from my heart, which maybe sometimes I shouldn’t. I say too much. But for the most part, you can’t be throwing any guys on your team under the bus. It’s staying positive, you’re not calling guys out one-by-one or anything like that. You can maybe call out the team in general, but it’s always team-first. I know as hockey players we’re pretty typical in the answers we give, but that’s just because we’re such great team guys, and we don’t want to make headlines. That’s the bottom line – you’re not trying to make any headlines.

Doughty, on handling tougher questions, and knowing when to use an internal censor:
Sometimes you get asked questions, too, that kind of piss you off. Your immediate reaction is that you want to give an answer that’s – what’s the right word – kind of mean. Basically, sometimes when you get asked those questions, you’ve just got to take a second, realize they’re just trying to make a headline, they’re not trying to make you feel bad or anything like that, and just give the right answer. Sometimes I just try to think for a few seconds before I start speaking, because sometimes I can get upset and then just say whatever I want and bad things will happen. Just try to deal with the media with respect, obviously. Be honest. Just always be available. 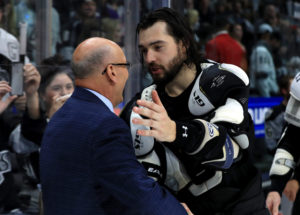 Doughty, on what the media does that irritates players:
I think for one is when they challenge either you as an individual or challenge your team and say that ‘what was up with that game last night? You guys played like crap.’ No one actually said that, but you know what I’m getting at. That frustrates you sometimes, because you feel like you and your teammates are giving everything you possibly can on the ice that night before, and to come in that next morning and hear from the media that that was [road apples], it’s not a good feeling, because you gave it your all. But, that’s just the bottom line. Sometimes you are [road apples], and they’re just telling the truth, so it’s not on them. Besides that, I don’t think anything else really pisses me off. Obviously, I get pissed off when media members say other players are better than me when I know for a fact that they’re not, so that pisses me off.

Doughty, on handling media in Canadian markets like Vancouver or Toronto, compared to L.A.:
I try to just keep the same approach – just that honesty. Try not to say anything to make any super-big headlines. But, yeah, definitely, when you go to Vancouver or Canadian cities you’ve got to be probably a little more careful, because those guys will take it and run with it a little more. Hockey is huge in those areas of Canada. But I don’t really change too much – just maybe keep it a little more simple.

Doughty, on whether the team was aware of Darryl Sutter’s episodes with the media:
Oh yeah. Yeah, definitely. When it was early and he came here, we loved it, we thought it was hilarious. And then as the time went on, it got old a little bit. We definitely thought it was funny, but at the same time, we thought it wasn’t great for you guys, you know?

Doughty, on Jonathan Quick’s brief media scrums:
That’s his entire game plan. He doesn’t want to give you guys anything so you guys don’t come to him. He’s a smart man.

Willie Desjardins, on the differences between handling Los Angeles and Vancouver media:
There is a big difference. [laughs] But it’s the amount, and it’s every day in Van. Like, lots of days I’d be in two-a-days, and they’d have probably a couple cameras there all the time. Just the volume is different. There are probably two radio stations for sure that talk about it all the time, so it’s just out there more. It’s just more of a topic. I think for me, the media is a big part of your team too, though. [pause] I’ve got to be careful with what I’m saying! I’m being careful. But I just think the media’s fair. They’ve got a point of view, and you won’t always agree, so that’s where the difference is. 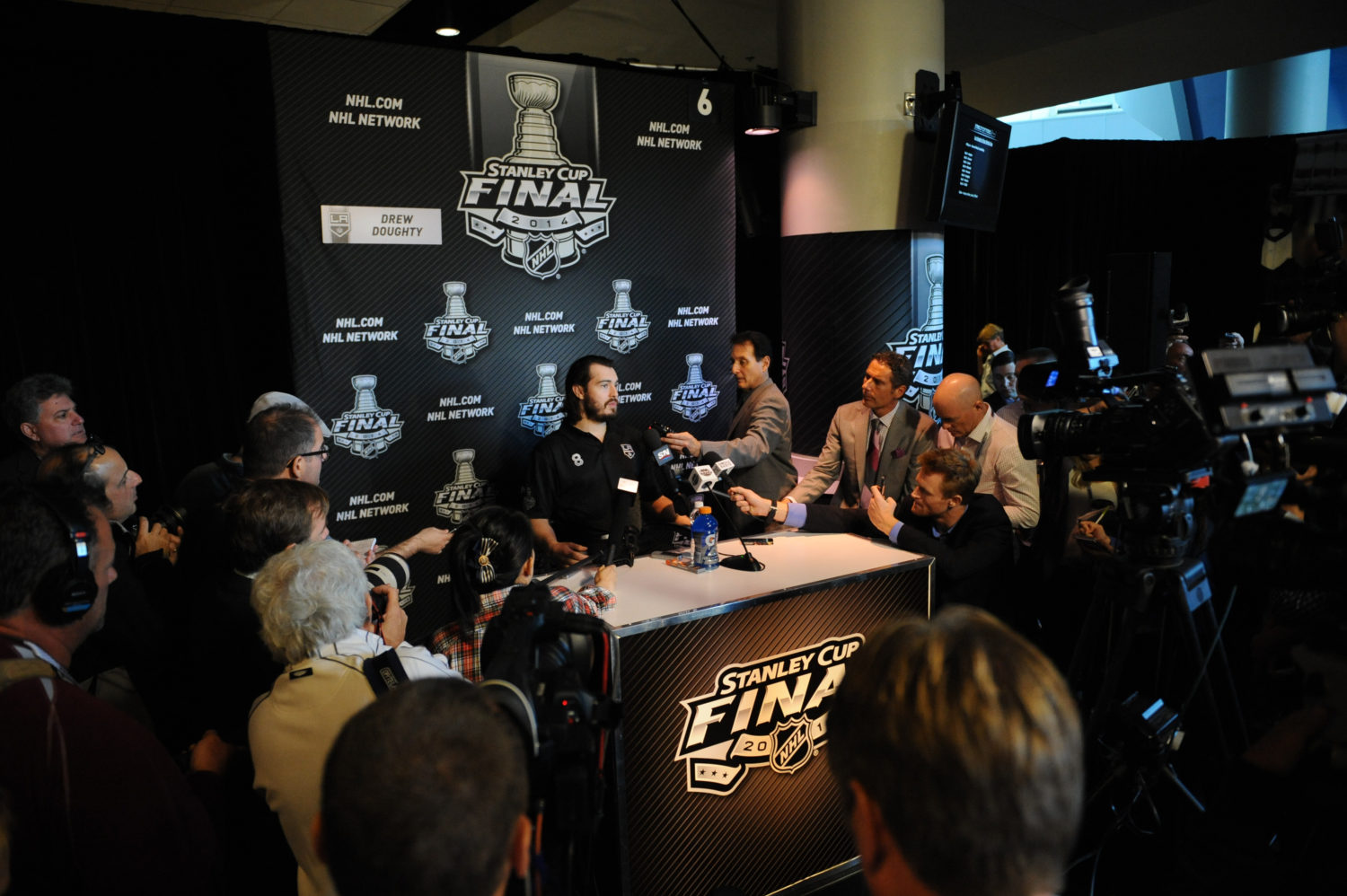