Today’s the day of the first split-squad games of the NHL preseason…….but first a few notes looking back on the Reign side from the past few days. 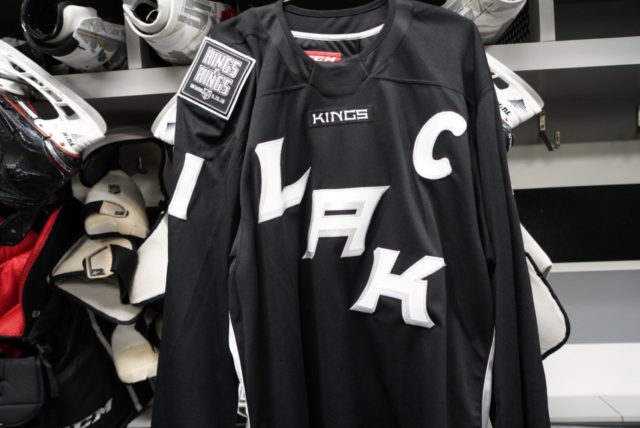 All Kings players from Sunday’s event wore a special jersey during pre-game warmups. The black jerseys featured a diagonal “LAK”, as well as a small Kings wordmark on the front. The shoulder patches were the Kings vs. Kings logo on one shoulder and the traditional LA Kings shield on the other.

The biggest seller from the game was Jonathan Quick, who sold for $1,500. Other highly bid on jerseys were Drew Doughty ($750) and Ilya Kovalchuk and Alex Martinez ($725 each).

The hometown Reign favorites got some love too as goaltender Peter Budaj, a fan favorite from his time with the Reign during the 2015-16 season, went for $686. Other jerseys of Ontario players / alumni – Jack Campbell, Adrian Kempe, Kurtis MacDermid, Cal Petersen, Austin Wagner – also went for $600 or more.

From the Reign’s release –

During the on-ice All-Star Classic announcement on Sunday, Reign President Darren Abbott talked about the impact that the All-Star Classic will have not only economically, but in a community sense as well. The partnership and donation to the Lightspeed Academy further shows the Reign’s commitment to their community and the $60,000 donation will be completed over a two-year period.

The Academy, which opened on August 15, is a new venture by the Ontario City Library that will bring new technology-based opportunities to the Inland Empire. The Reign’s donation will allow for new, 3D technology (modeling equipment and printers) and it will also come with co-branded programs designed for different age groups.

Strong Crowd For KvK
A strong crowd filled Citizens Business Bank Arena for the Kings vs. Kings event – In his post-game press availability, forward Mike Amadio commended the fan support in Ontario for the event.

The attendance for the event should come as no surprise – The Reign have averaged more than 7,500 fans in each of first three seasons of the American Hockey League in Ontario, and Dave Andrews praised the Reign support ,as well as the successes had in San Diego, in his post-event press conference.

“[Ontario and San Diego have] been in the top three or four teams in attendance for the last three years and now are the sort of franchises that we use as examples for other teams in terms of best practices and how teams need to be structured and the like.”

Ontario has been inside the league’s top quadrant in terms of attendance in each of its three AHL seasons.

*While on the KvK topic, CLICK HERE for an array of photos from the event from the Reign, including some really cool aerial shots from the rafters of the CBBA.

Reign State of the Franchise 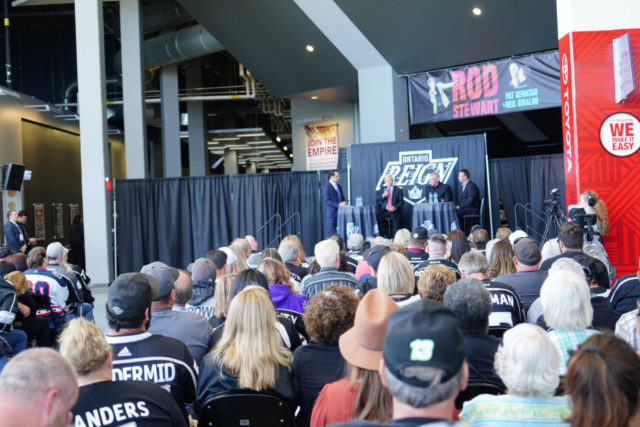 I won’t go into full detail – seeing as this was an exclusive event for season-ticket members – but a few of the highlights, also including some quotes from post-event media availability:

– Andrews touched on a few topics, most notably the successes of the AHL’s California movement from a league angle. When asked about the topic in his post-event availability, Andrews spoke highly of the successes in Western Expansion –

“It’s been terrific. There are so many different aspects to our business, but when you look at, first of all, we’ve got NHL teams on the West Coast who are happy now with their location for player development. They weren’t happy before – they were satisfied with the American Hockey League – but they weren’t happy and now they’re happy and that’s important to us because our business model is completely tied to player development. Having the Kings and the Sharks and the Ducks excited about the fact that they have their own American League teams close by, it’s really important.”

Also from Andrews’ portion, he mentioned that he would ideally like to see all AHL teams move towards a 72-game schedule so that all teams are on the same playing field, but noted that each tim in this season’s Pacific Division will play the same number of games (68), which removes the need to determine playoff seeding by points percentage, which he felt was a bit confusing.

Last season, Texas and San Antonio played 76 games, compared to the rest of the division playing 68. Still a lot to be sorted out – a league decision needs a 75% majority vote from the Board of Governors – but that is the vision.

In his post-event session, Andrews also touched on the possibility of adding an eighth team to the Western cluster, if in fact the NHL decides to expand to Seattle with its 32nd team.

“This whole Western expansion has now grown to seven teams and I would anticipate, when there is a 32nd team in the NHL, if it happens to be in Seattle, that will probably fill in an eighth team in the Western United States for us.”

With Andrews already in town for the All-Star Announcement, I thought his addition to the panel gave fans a unique angle on the league side of things that one wouldn’t typically see in a specific AHL market.

– Blake and Stothers each handled the topics specific to the Kings and Reign. Similar to what he said at the Kings event, Blake spoke to the progression of players in the Kings system and highlighted Cal Petersen, Sean Walker and the duo of Austin Wagner and Matt Luff as players he expects to make strides in Year 2 in the system.

Blake also talked about the Kings successes with recent college, junior and European free agent signings as helping to fill gaps in the prospect pool throughout the system. He highlighted Petersen specifically here as well as a part of a group that includes Alex Iafallo, Daniel Brickley, Sheldon Rempal and Brad Morrison in recent memory.

Stothers spoke to the strength that Ontario can expect to see between the pipes this season with Jack Campbell, Petersen and Peter Budaj all in the organization behind NHL starter Jonathan Quick. Stothers talked about the strength of the split last season between Petersen and Campbell, with each going every other game.

Whatever the Ontario tandem is – it’s expected to be Petersen / Budaj, barring any changes – it should be a strong one.

– We also got an update on the new upgrades / additions to the CBBA. Krouse mentioned that the videoboard is still slated to be really cool, covered in detail here, but due to a couple of factors it may not be installed as soon as originally hoped.

Reign President Darren Abbott noted in his post-event media availability that the scoreboard is “not a small investment” and that he and the organization are very appreciative of the strong relationship with both the arena and the City of Ontario.

Lastly
We’ve got two games tonight! Jon is in Arizona covering the team on the road and I will be at STAPLES Center for tonight’s preseason home opener. Stay tuned to the blog for live coverage of both games.