Citizens Business Bank Arena announced on Tuesday that it is installing a new scoreboard, which is scheduled to be ready for the 2018-19 Ontario Reign season. The new videoboard, designed by Daktronics, is a state of the art addition to the CBBA. In the arena’s words –

The new center hung Daktronics LED Display system consists of four main video displays. Each main display will measure 11.5 feet high by 21 feet wide to bring larger-than-life imagery to fans in every seat. Connecting the corners of the main displays will be four wedge-shaped displays, each measuring 11.5 feet high by 3 feet wide. Four displays form a ring round the configuration, each measuring 2 feet high by 21 feet wide. All of these displays feature a tight 6-millimeter line spacing to bring increased resolution and image quality to viewers at every event. The main displays are capable of variable content zoning allowing each to show one large image or to be divided into multiple zones to show any combination of live video, instant replay, up-to-the-minute statistics, graphics and animations, and sponsorship messages. Daktronics LED video and messaging display technology offers a long lifetime with consistent, industry leading performance and low power consumption, providing value and excitement for years to come.

“I think it’s going to be very exciting for the fans, very exciting for us,” Reign President Darren Abbott said. “The new scoreboard is going to allow us to use HD – The video will be clearer and replays will be better. I think a lot of the sponsorship activation and some of the fun things we do in-game on our screen will carry over a bit better because people will be able to see it a lot better. The scoreboard we had before, it served us well but it will be nice to have a fresh, clean look.”

A rendering of the new board, provided by the CBBA.

Coming along with the videoboard will be a completely renovated, behind the scenes upgrade. A new system to run the board will also be installed, which will give the Reign additional flexibility with video presentation, game operations, instant replay and other in-arena elements.

From talking to decision makers on both the team and arena sides, the common theme seems to be the enhancements to in-arena experience. Speaking with Michael Krouse, President & CEO of the Greater Ontario Convention and Visitors Bureau, as well as the Ontario Convention Center and Citizens Business Bank Arena, he said that the arena “read your surveys and heard your feedback” and that fan input played a large role in the decision to make the upgrade.

“The arena itself is pretty technologically advanced but the primary issue that we had here in Ontario is that the scoreboard was dated, it wasn’t consistent with the times,” Krouse said. “The new scoreboard was our highest priority but it was two years in the making. Technology was advancing so rapidly that I didn’t want to buy the old stuff, I wanted to wait until the newest technology was available.”

Krouse mentioned that while the arena is ten years old, the existing scoreboard is even older as it was a previously used product when it was originally installed at the CBBA. He spoke candidly about how impactful the new board would be and seemed incredibly excited for the impact it will have on not only Ontario Reign hockey but other arena events as well.

“The world of technology has changed and that change has created much more interactive and much more high quality screens,” Krouse said. “With the new scoreboard, you’re going to see great visuals, live action so good you feel like you can reach out and touch it.”

From my own experience in the industry, I look no further than where I worked last – with the ECHL’s Adirondack Thunder – for what a new videoboard can do for in-game experience. The board at the then named Glens Falls Civic Center was straight out of the 80’s – think almost as old school as the scoreboard from Miracle. It had no video capabilities whatsoever and was passed by in the times years ago. Enter in a new, state of the art board in 2016 and everything changed.

“The new videoboard has clearly been the biggest noticeable upgrade at Cool Insuring Arena,” Adirondack Thunder General Manager Jeff Mead said. “Not only has it helped our fans with the ability to see the play at all times and the inclusion of clear instant replays, but the board has also allowed greater interaction on the entertainment end with content such as our fan cams and in-game trivia questions.”

I also spoke with three other teams around the AHL – The Bakersfield Condors, Colorado Eagles and Hershey Bears – who have all installed new boards in recent history.

Bakersfield
Starting in-state, the Condors have seen a significant up-tick in their in-game fan experience with the installation of the new board. The new scoreboard at Rabobank Arena was a $700,000 update from Daktronics that features four HD video panels with crystal clear LED screens, offering a great view of game action and crowd shots.

“The addition of the new HD video panels had a positive impact on the fan’s experience at Condors games this past season,” Ryan Holt, Bakersfield’s Director – Media Relations & Broadcasting, said. “Being able to utilize the videoboard for game action and better entertainment was great for the organization and we look forward to making the fan experience even better the coming years.”

Hershey
Hershey also spoke glowingly of the impact that a new board had on their in-arena experience. Brandon Sheaffer, Manager, Multimedia & Great Save Productions (production company of the Hershey Bears) talked at length about how great the change was when the new board was installed.

“Our upgrade was a massive shift in what we were able to entertain our fans with – Not only did we dramatically increase the physical size of the centerhung, but we added full fascia ribbon boards and a ring under the centerhung. We also did a full upgrade of our control room and added additional functionality. Being able to utilize multiple displays and screens to entertain has opened up a world of possibilities that we couldn’t even imagine doing before.

The excitement level in the building when we score a goal feels much more intense with the LEDs and other boards displaying our goal animation. I’m sure our sponsors are happier with more visibility when we do a whole moment of exclusivity in the bowl (where they are seen on not only the centerhung, but the ring and the fascia). We are able to execute a wider variety of sponsorships to increase sales revenues. On a whole, the presentation feels more immersive. You’re getting that team branding all around the bowl when you walk in and it just feels right.”

Colorado
The Eagles’ host arena, the Budweiser Events Center, was another building to benefit from inputting a Daktronics system. The new board provided the Center and the Eagles with a wide-angle visibility that ensured that the displays look great from any seat in the facility. The new technology gave the team and arena more flexibility with live video, instant replays, graphics and animations, and sponsor messaging.

“The addition of a new center-hung scoreboard brought our fans an incredible addition to their in-game experience,” Phil Gladden, Colorado’s Director of Video Services, said. “The new board allowed us to engage our fans in a variety of dynamic areas and gives everyone a crystal clear look at all of the action on the ice.”

All-in-all, Reign fans can expect a new and improved game-day experience when the regular seasons opens on October 12. While the new board will not be in place by the Kings vs. Kings game on September 16, it is expected to be fully installed and functional by the start of the Reign’s home regular season schedule on October 12. 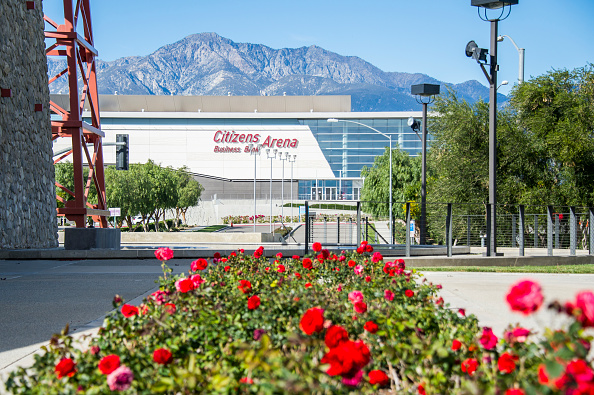