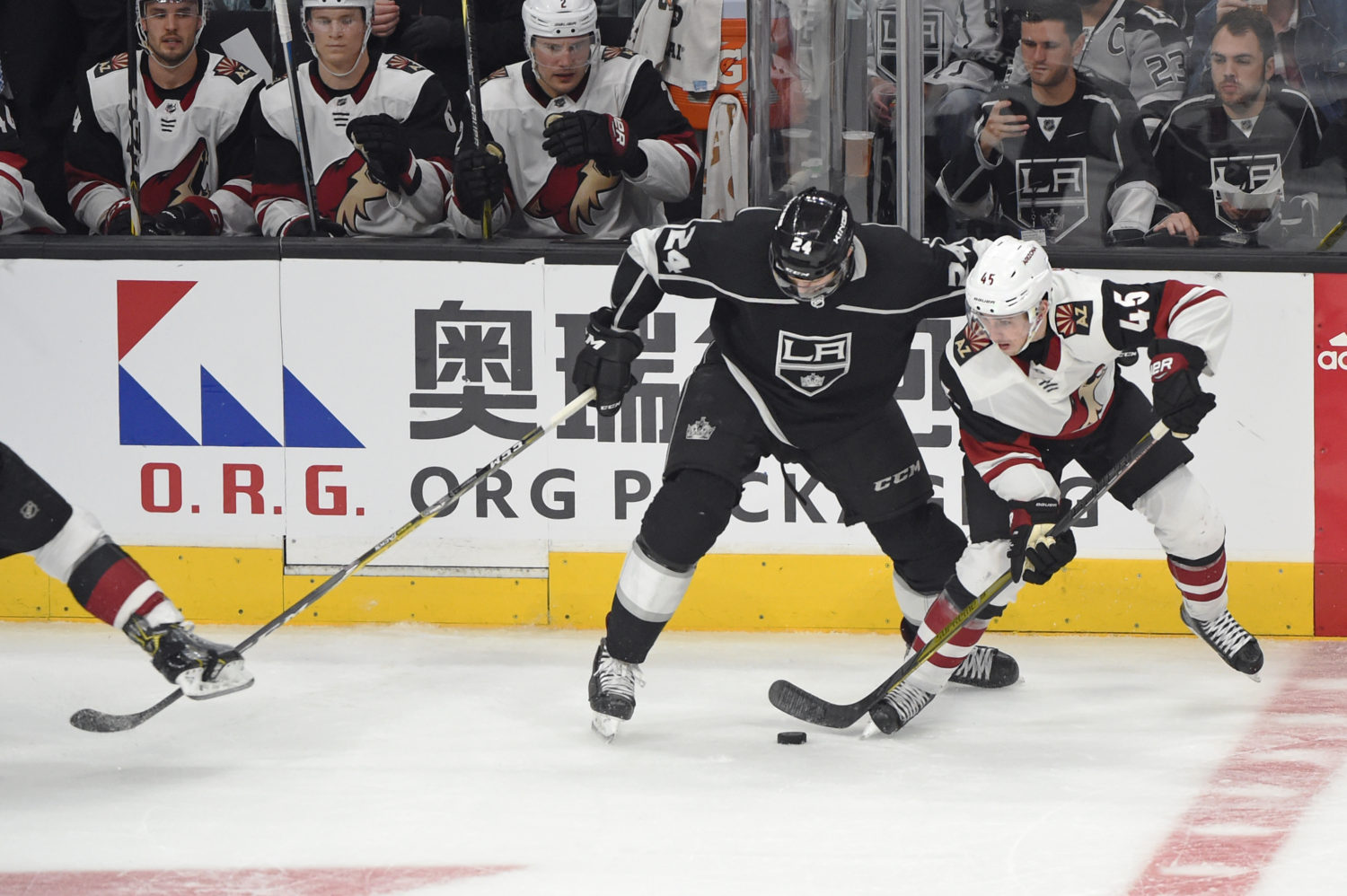 On why coaches are more apt to make changes and rotate forwards’ alignment than defensemen:
I think we’re willing to change. We change our lineup based on opponent, maybe a guy’s showed us a little bit, maybe we need more mobility. But I think you have guys that you know are going to be in your lineup, just like you do up front. But we took Foles out of the lineup, put Paulie in there. We’ve had Kev in our lineup. Sometimes injury dictates that. Match-ups, situations do present themselves. Drew’s going to play big minutes in all situations because Drew plays big minutes in all situations. But Kev, whether it’s Kev or Paulie, they’re both going to have to play power play for us, they both played the power play before for us, and they’re both very capable of contributing in those areas. They’re going to have to play quality minutes with the schedule the way it is. Teams are too deep now. You’re not just playing against one line. Teams are deeper. You need everybody so you can play with the pace you need to play with, and you can maintain that pace through the course of the hockey game through the schedule.

On whether there are offensive and defensive adjustments that come with moving defensemen:
Well, I think everybody’s different. The big thing for us is communication. If you look at Drew and Dion, [they’re] two of the best. They’re talking all the time on the ice. It’s just a huge help. It makes you faster when you hear things. As soon as you hear a guy calling, you can already formulate a picture in your mind of what the situation is. I think we’ve got enough experience on our back end that a guy like Kev or Paulie can come in. I don’t think it changes a whole lot. You do get different reads off players. Some guys are more apt to get involved in the rush. What I think with our defense, there’s probably a check list of four or five things that if you’re going to be a good player on our team and play that position, you’ve got to do certain things really well. They have really good guidelines on defending and how we’re going to defend situations. We got some practice in that today. They have really good guidelines on going back for pucks and where the support is, but we want our guys helping out in all three zones. Whether you’re Folin or Doughty, we want you helping getting pucks to the net and creating offense for us. We want you being up on the attack. It doesn’t matter if you’re Clifford or Kopitar, there are some guidelines in place structurally they all are well aware of, but then from there, we’re all capable of different things. But Kev is totally abreast. There’s no need to sit down and go over video. He’ll know who he’s playing with, or if Paulie comes in, he knows who he’s playing with. Knows what situation he’s going to play in, and they’ll be ready to go.

On aspects of the penalty kill that have worked well during the recent stretch:
Well, we went through a stretch of five games where we weren’t very good. I know I’ve talked about this many times – it just seems to have a bigger effect on the outcome of games than anything else than power play, even. The power play, I can think of several games this year it’s been a real key factor. We had three goals the other night. A big goal will get you back in the game. We want to keep our goals-against down, and I think when you can limit the opportunities of the other team and time in the zone, I think it goes a long way of cutting down the number of chances that teams get. I think Jeff coming back in, helping in faceoffs, with a right shot there he’s helped us. I think Thommer’s done a really good job. Mitchie’s been in and out of our lineup, but he’s been a really good penalty killer for us. We’re probably one of the few teams that uses six guys most games to kill penalties, and at times we’ve used eight that we feel are really strong. We have a really responsible group that can all kill penalties and get the job done for us, and I think when you can do that, it keeps the energy in your killers, and they can pursue the puck, they can get the puck recovers, they can get pucks down the ice. I think the commitment to get in the shot lanes has been really good lately, so if you combine all those things that keeps the puck out of your net – and obviously you’re going to need big saves at key times, and we’ve gotten that.

On Arizona’s resurgence:
I’d say the last 20 games they’re one of the best teams in the league. Give them credit. They’ve stuck with it. They’ve really got their team to buy in to the way they want to play. I think they’ve finally solidified their goaltending, which has been an issue all year, with a lot of it due to injury. But with Raanta and with Kuemps there now, I think they’ve got two guys that are very capable and I think it’s given their team a lot of confidence. At the beginning of the year I thought of them as an offensive team, but they check as well as any team in the league. They play with pace. They [hound] the puck. They really embrace the team game and how they want to play. I watched the game in Tampa the other night – they controlled that hockey game, start to finish. It was impressive. They’ll be as tough a challenge as we have in the last five games here.