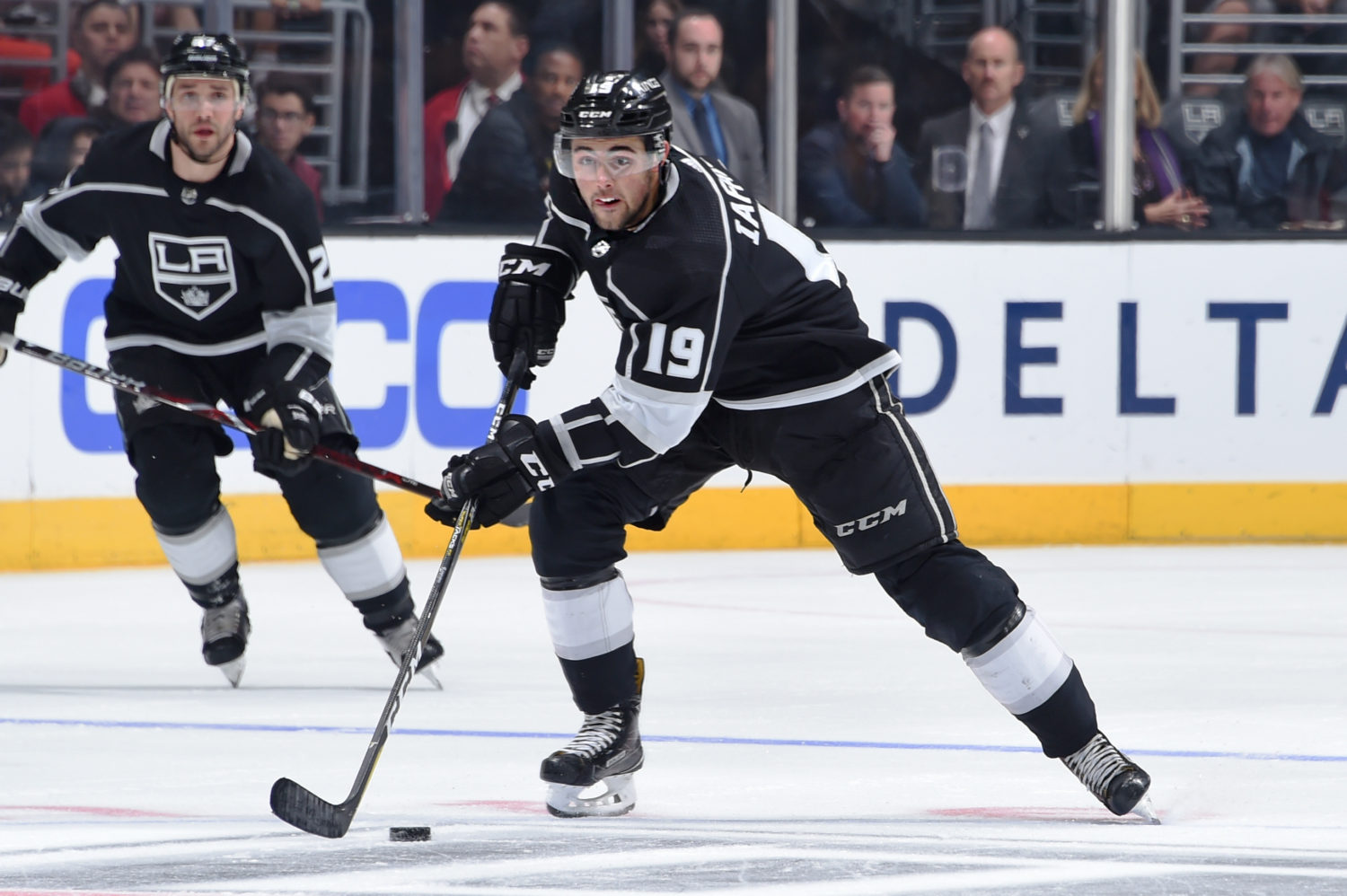 Insiders. A happy Friday to you. A reminder that tomorrow’s game is a 1:00 p.m. start (FOX Sports West / FOX Sports GO / FUBO TV / KABC 790 / I Heart Radio) as the Chicago Blackhawks will make their lone Staples Center visit in 2017-18. HISTORY (not real history) is on the line, as the Kings haven’t swept the Blackhawks in any season series since doing so in back-to-back seasons in 1997-98 and 1998-99, going 4-0-0 in both years. Los Angeles has lost at least one game in regulation to Chicago for 17 straight years but won both games at the United Center earlier this season. The Kings have already guaranteed that they will win the season series with the Blackhawks for the third consecutive year.

-The Kings took the ice shortly before 11:00 a.m. and were color-coded thusly:

-Tomorrow’s game is an afternoon start, so the #LAKingsGoalieTweetOff applies. There were no surprises; Jonathan Quick left the ice first and will be expected to start in net against the Blackhawks. Don’t be surprised if L.A. goes with the same lineup used against Columbus Thursday night.

-Trevor Lewis (upper-body) got into some one-on-one net-front battle drills, but was going at partial speed and the opposition he faced wasn’t going full-bore against him. “I got a little bit [of contact] there today, but obviously with a game tomorrow, it’s hard to do too much contact,” he said. “I think with these days coming up, it’ll definitely help me a lot.”

He’s feeling better each day, and for the first time was grouped as part of an actual line, but there’s still no real timeline on his return or any sense of who he’ll skate with once that return is imminent.

“Honestly, I’d have to talk to the trainers. We haven’t really talked about that yet, so just kind of go day-by-day and see how it reacts, and go from there.”

“It just takes time. No one wants to catch up, especially in a playoff battle.”

-On Thursday I asked Derek Forbort about his eight blocks in the Vegas game and whether he came out of the 4-1 win particularly sore. He was completely fine, and then the conversation actually steered towards his equipment and how he most effectively shields himself from the potential of blunt force injuries as a defenseman who has a tendency to get in the way of shots. As it turns out, Forbort actually wears extra padding under his shinpads and his socks. It’s a double liner that runs up to his thigh that minimizes the shock of wayward pucks and sticks, and he’s worn it throughout his time in the NHL.

-Tip-A-King returns after tomorrow’s game, and it’s not too late to purchase tickets to the Kings Care Foundation’s largest annual fundraising event. One special booth that will return this year: the doggie petting zoo! While Gustl Kopitar joined Tip-A-King last year, two of Jake and Courtney Muzzin’s three dogs will be at this year’s event. Lulu, a Shiba mix, and Lily, a Chow Chow mix, both of whom are rescue dogs, will be hanging out, though Darryl, a St. Bernard, will be back at home. Keep all these good doggies in mind for next Saturday’s Stick Up for Animals Night. More information on that night will be shared over the coming week.

-Quite a few teams signed players to entry-level contracts Thursday as March 1 represented the start of open season for teams to sign players on their reserve list to ELCs that start the following season. Courtesy of Cap Friendly, the details of Gabe Vilardi’s contract structure are below:

-Over the final 40 minutes of Los Angeles’ 5-2 win over Columbus on Tuesday, the Kings out-shot the Blue Jackets 26-19 and were able to move pucks quickly up-ice in a strong all-around checking and puck-moving performance. It represented the antithesis to a first period in which John Stevens wasn’t a fan of the Kings’ quickness in either direction.

“Our pace, both directions, was off of what their pace was,” he said. “I didn’t talk to their coaches, but I’m willing to bet that’s one of the best periods of hockey they’ve played this year, the first period. Their game was outstanding, and we were a step off, so when you’re a step late coming back, you’re a step late in being available for the puck going the other way. When somebody gets a puck, your feet are going the wrong way. Our pace in general had to improve, and we were gapped out and they were tight, and once we got our pace up, we got pucks up quicker, we were in better position to support the puck going the other way. Teams that play fast play fast in both directions, not just offense. It’s not just going one way, it’s working back fast, checking-wise, to get a puck in position to support going fast the other way.”

It’s part of a topic that LA Kings Insider has covered regularly over recent years, when the speed of the game began to pick up, and the Kings, who were capable of playing with a strong pace, weren’t quite as equipped with individual speed, and at times struggled to play quickly, especially at times during the 2016-17 season. There’s a difference between pure speed and quick decision-making, and on Friday Stevens discussed the players on the current Kings team who have added to the team speed while also making quick reads on the fly, and how that has accentuated the team’s checking, pursuit and ability to advance the puck up-ice.

“We use the term when you’re predictable to yourselves, you’re a lot faster, when we all are knowing and expecting what the other player’s doing and we have a belief and conviction that that’s the way we need to play. You can certainly play that way as a group,” Stevens said. “I think our team speed’s improved this year with just guys that can skate. If you look at Rieder now and Kempe and Iafallo, and I think our defense has got good mobility, but even if you look at a guy like Christian Folin, he’s always looking to make a play going forward. He’s not your fastest player – although he moves well for a big guy – but he plays fast because his first thought is to get a puck up to speed, so I think just getting everybody on the same page and just being predictable to each other allows you to play that way, and I think a guy that’s got good hockey sense can play fast just because he anticipates where the puck’s going. We’ve got lots of those guys. Just talked about Lewie. Kopi, Kempe, those guys all think the game. Iafallo – you can go down the line. Drew Doughty. Drew is a unique guy because Drew has the ability to slow the game down when he has to, but also speed it up. I think because of guys like Drew, he has the ability to control the game, but I think as a group we want to certainly want to be a team that increases our team speed but plays a lot faster by doing things quicker.”

There was a good demonstration as the game progressed Friday night.

-Chicago is coming off a 7-2 drubbing in San Jose Thursday night, so Los Angeles will be facing a team Saturday afternoon looking to make amends. It should also catch the Kings’ attention that the Blackhawks’ 61 first period goals are tied for the fifth most in the league.

But though the Blackhawks will miss the playoffs for the first time in 10 years, they’re still a dangerous team that possesses the puck disproportionately and ranks third in the league with a 53.5% raw Corsi-for percentage. They also rank third, according to Natural Stat Trick, by claiming 53.6% of all scoring chances, though they rank 20th with 48.3% of all “high-danger” scoring chances, which seems to suggest they’ve been able to create a higher percentage of B-type chances this season. With Corey Crawford out since the Christmas break, the inconsistent goaltending hasn’t exactly favored the Hawks, who are 10-16-3 since Crawford’s last game.

“They serve as big of a challenge as any other team we play because they attack well, they’ve got guys that can make plays, they lead the league in zone entries, so you’ve really got to do a good job on the rush, and they’ve got some dangerous players that can hurt you,” Stevens said as part of an answer to a question that suggested that teams in Chicago’s position can be particularly dangerous. “And, I think the fact that I think young guys might be excited for an opportunity to play in these situations makes them dangerous.”