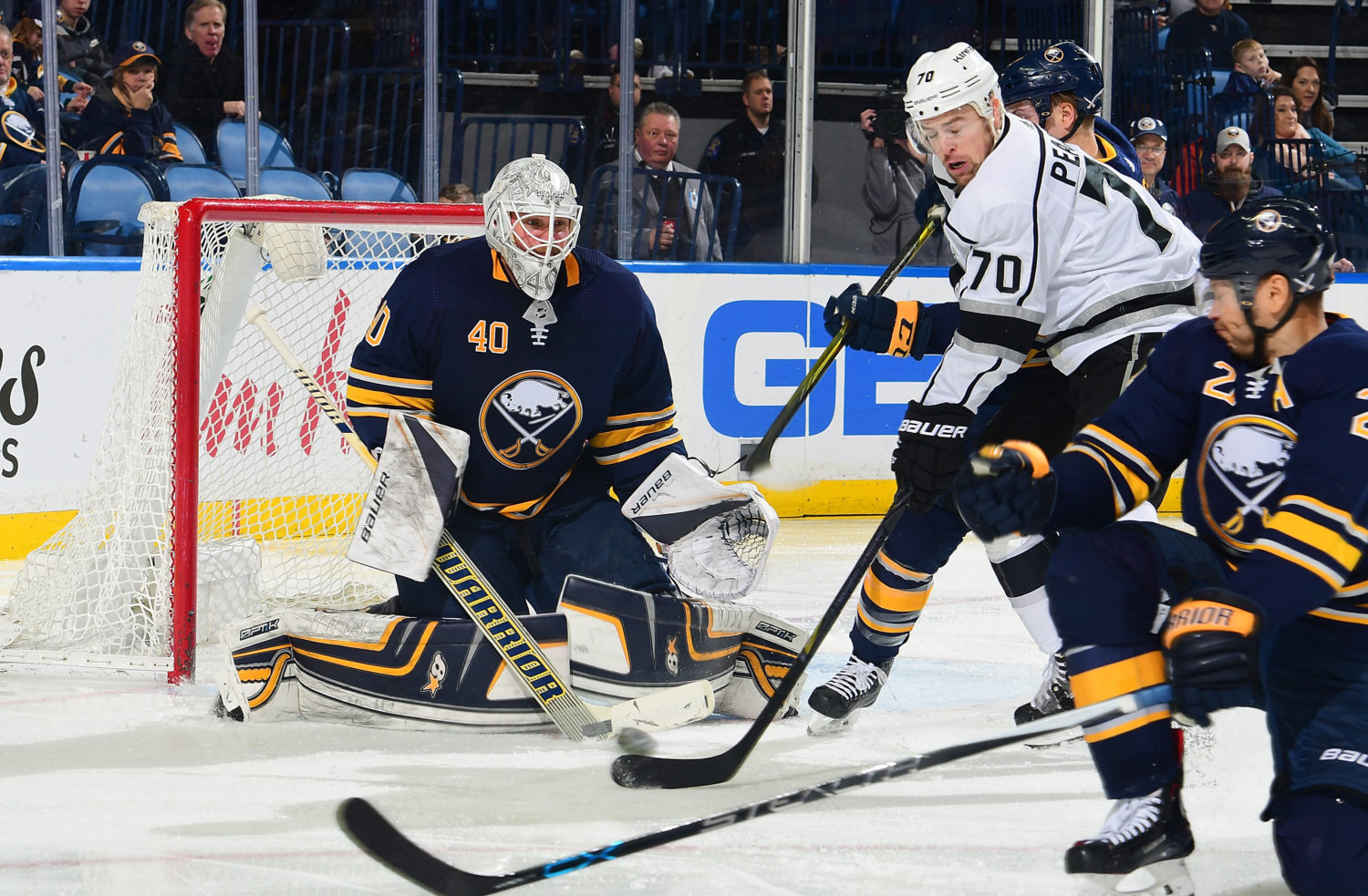 On whether Tanner Pearson’s net-front ability can be measured by any statistic:
I don’t know if there’s a specific analytic that tells you that. They do track inner-slot shots, but we look at net-front as a real key to our hockey team, and it’s a starting point for our offensive game. I think Tanner’s one guy that’s really embraced that role. I think he understands how important it is. I think Brownie’s been a good mentor for him in that. Trevor Lewis is a guy we put at net-front on the power play, just because he was really good there and we knew he’d retrieve a lot of pucks, but Tanner really has put a big value in that part of the game. I think he’s a straight line player that knows if he ends up at the net, more is going to happen around the net, and I think he’s worked hard in getting better. Billy Ranford does a good job. He looks at the goalies and tracks the goalies, and he tells the guys about the goalie and net-front, so for instance, some goalies are big and look over top, so if you’re too tight, it makes it easy, and if you come off him a little bit, it’s harder to see. Other guys look underneath, so you can’t be tight to ‘em. Those are all things we try and pay attention to, and the guys really care. Like, I know Brownie wants to know ‘how can I be most effective at net-front?’ So, there’s a lot of detail when you tell guys to go to the net. Well, he can go to the net, but there’s a lot of skill and detail involved with going to the net and doing a good job at the net, and I think Tanner’s really done a good job with it. [Reporter: he set the bar high, obviously, when he had that many goals. At any point this year, did you sense any frustration for him when he wasn’t keeping up that pace?] Tanner? Oh, sure. I think the challenge for an offensive player – I think Tanner’s a good 200-foot player, but I think he prides himself in providing offense for our hockey team – is the challenge is sometimes when you don’t score, you get frustrated, and when you get frustrated, you don’t work. That’s what you can’t do. Tanner’s a guy that has a game that can help us win even when he doesn’t score because he checks and he does a lot of things well. He kills penalties. He’s at the net and doesn’t get a point, but the puck goes in the net because he’s at the net. I think we as coaches make sure he knows that, and I think he understands the value and the little things he does that don’t always end up showing up in the stat sheet.

On what makes Trevor Lewis a valuable part of the Kings:
How much time you got? I’ve been fortunate to have played and coached a lot of really good teams, both in the American League, and obviously I’ve been a part of good teams here. You always have those glue guys on your team. Lewie’s one of those guys, he’s just zero maintenance. You start talking to him about something, and he already knows where you’re going. He understands the game, he really values all the little things in a game. He just does everything right all the time. If you’re teaching your team game and the details of your team game, you can always teach it through Lewie because he just seems to do everything right. He’s really competitive. He always does the right thing for the team, and he’s got a skill level and a toughness to him that teams [inaudible] guys like Trevor Lewis. He’s a guy that can play on your fourth line and he could be your best player, and if you play him on your first player, he can be your best player, and you can play him pretty much at every position and he’ll make a difference. It was just one of those detail guys that really takes great pride in the small things in the game that make a difference.

On whether the Alec Martinez-Dion Phaneuf pairing has shown growth:
Yeah, we like the ingredients of the pair. Both veteran guys that communicate well. The one thing we tried to figure out is we can move them both back-and-forth, left-and-right. Dion’s played a ton of right, and Marty’s played a lot of right, and sometimes it goes back-and-forth, but Dion started on the left, and Marty’s been on the left as of late. We like the pair because they both defend well. They both have the ability move pucks, Marty maybe more with his feet. But Dion’s always looking to move a puck quickly, so I just think they have different ingredients that complement each other well, and they communicate really well, which I think really helps the pair, and it’s been a good fit for us.

On whether the Blackhawks are dangerous as a team with “nothing to lose”:
I think every team we play is dangerous, for different reasons. I think they still have a lot of great players there and they have a lot of pride, and I think they’re really well coached. We have to be ready. They’re coming off a game in San Jose where things didn’t go very well, so if anything, that’ll make them more ready. They’ve got a lot of pride there. They’re going to want to bounce back on this trip and get things righted. You’ve always got Toews, who plays a really heavy game, and then you’ve got Kane, who’s just a dynamic offensive guy, and then you’ve got some young players that are excited about an opportunity and maybe get a little more responsibility and prove themselves. They serve as big of a challenge as any other team we play because they attack well, they’ve got guys that can make plays, they lead the league in zone entries, so you’ve really got to do a good job on the rush, and they’ve got some dangerous players that can hurt you. And, I think the fact that I think young guys might be excited for an opportunity to play in these situations makes them dangerous.