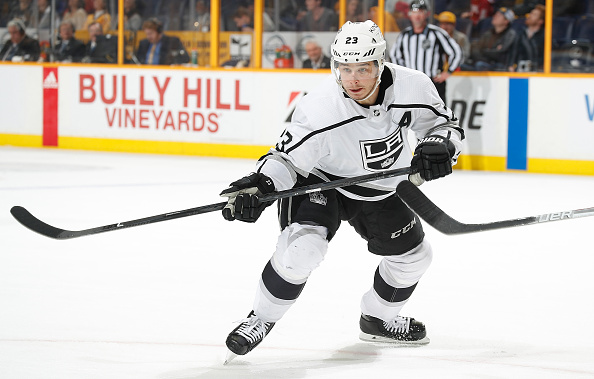 The play that led to the suspension happened at the 14:27 mark of the second period in their Saturday game at Amalie Arena. Brown received a five-minute major and a game misconduct. Sergachev left for the remainder of the period but returned in the third. The Kings lost 4-3.

Below is the video that Player Safety produced explaining its suspension.

Brown is tied for third on the team with 16 goals and his plus-25 is tops on the Kings. Also, his 19:17 of ice-time per-night ranks second amongst Kings forwards.

This season, Brown previously had a hearing with the NHL’s Department of Player Safety for cross-checking Penguins defenseman Justin Schultz on Jan. 18 and was fined $10,000.

He has been suspended once before in his career, in 2013 for two games for an elbow to the head of Jason Pominville.

At the end of the video, the Department of Player Safety said that Brown’s history with supplemental discipline played a role in its suspension decision. Brown will also forfeit $31,586.02 as part of the punishment.

The Kings were off Sunday but will practice Monday in Raleigh, N.C. Their next game, where Brown will be suspended, is at the Carolina Hurricanes on Tuesday. The team is currently two games into a seven-game road-trip.

Brown’s suspension is another blow to Los Angeles’ forward depth — at least in the short-term. Forward Trevor Lewis left the trip to get evaluated by team doctors after slamming into the boards in his shoulder and back area after a hit by forward Jared McCann Friday at the Florida Panthers. Coach John Stevens was hopeful Lewis could return at some point during the trip but hasn’t given definitive word on his status yet.