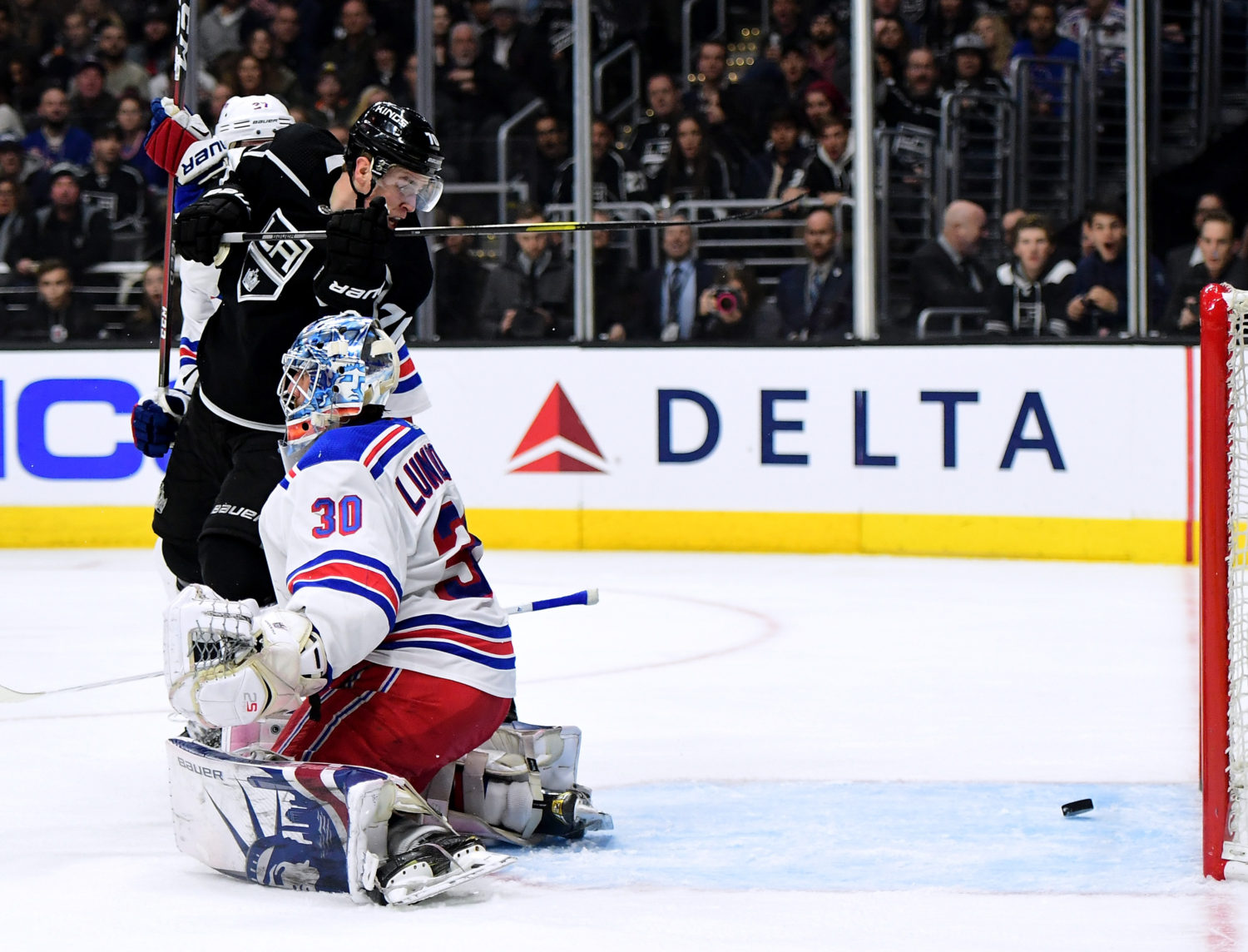 At the end of the first period, with the Kings trailing the Rangers, 2-0, and as the final moments of the Adrian Kempe-Trevor Lewis-Brendan Smith-Tony DeAngelo feud died down, Jonathan Quick stood at the gate to the team’s bench and, while casting his gaze towards the near-opposite side of the red line, shared some words for several of his teammates as they left the ice. It won’t quite go down in history alongside the fist bumps and encouragement he shared in San Jose after Los Angeles had fallen behind two games to none, but coupled with Kempe’s tussle with Smith, and the preceding shove of Lewis from behind, served as a galvanizing moment that turned some raised play after the team had fallen behind by two goals into some cold, hard (and needed) offense. That the Kings exploded in the second period wasn’t really a shock; during the first intermission several of us upstairs had taken into account the way the first period ended and predicted them applying a crooked number to the box score. A team mired in a six-game losing streak and trailing by multiple goals early is looking for that first chip to help the dam break. Brendan Smith helped provide that through his shove of Lewis, which gave Los Angeles a power play with a fresh sheet of ice and some extra resolve. 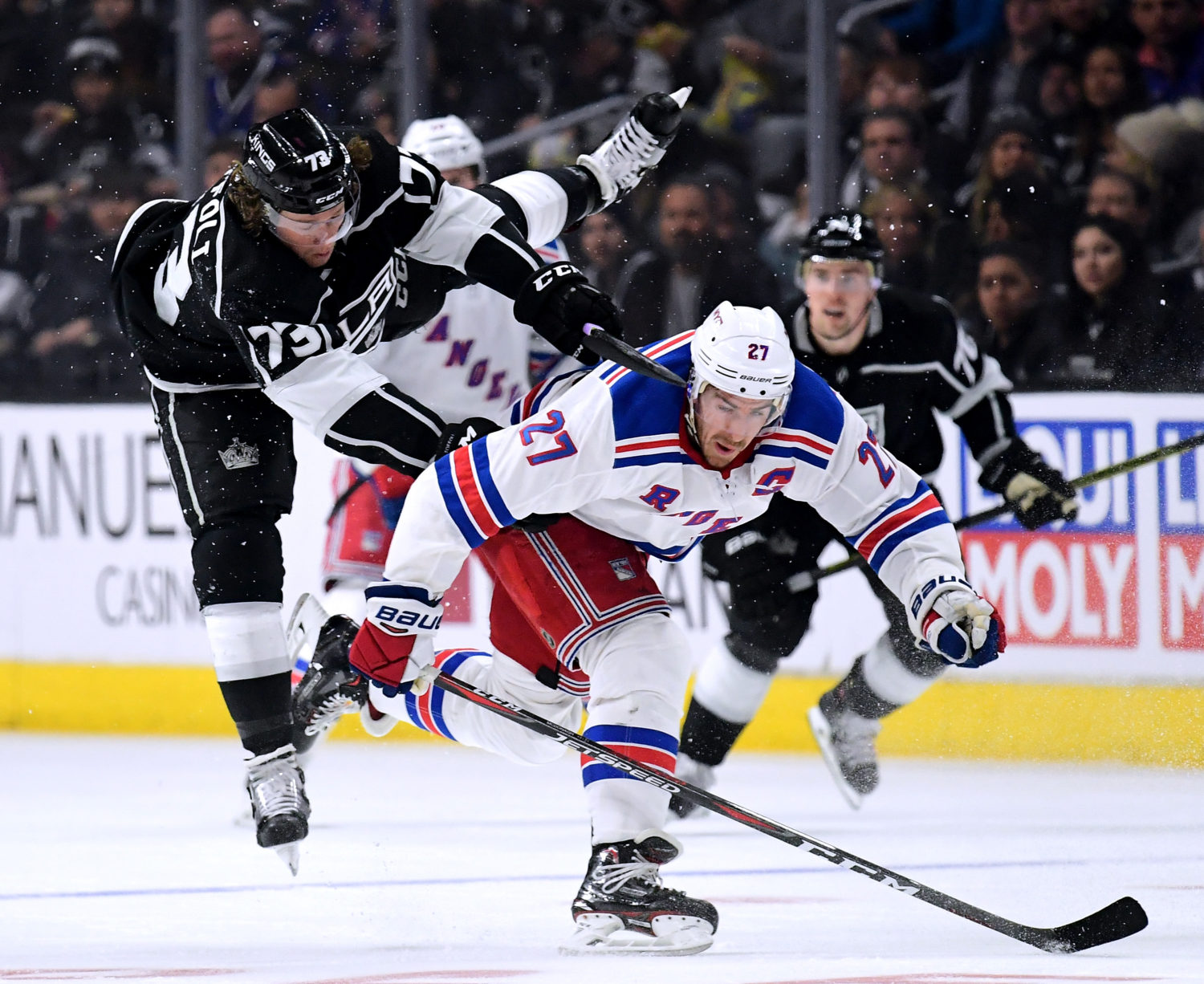 It took 15 minutes of game time to get there, but the Kings raised the competitive and emotional elements that John Stevens had spoken about on Saturday. They came in the form of a committed and improved net presence, with Dustin Brown providing an effective screen on Jake Muzzin’s goal and Tanner Pearson crashing the net to screen Henrik Lundqvist and deflect an Alec Martinez shot past the Rangers goalie. Both players are the most regular goalie-screeners on the team and willing to get to the hard areas where they’ll draw contact. When a team goes three-for-three on the power play, they’re relying on a number of pieces working together in concert, and players who set up camp in front of the net are a major part of that. It was another game in which players outside of the inner leadership circle contributed significantly. Alec Martinez and Trevor Lewis keyed a strong checking effort that limited the Rangers to 23 shots, and Michael Amadio, who made an important strip of Mats Zuccarello while defending on the man advantage moments before his power play equalizer, posted his first two-point NHL performance and first game in which he logged double digits in minutes. Considering his game was soaring when he was called up from AHL-Ontario, it will be interesting to see if that scoring burst pays dividends at the NHL level. 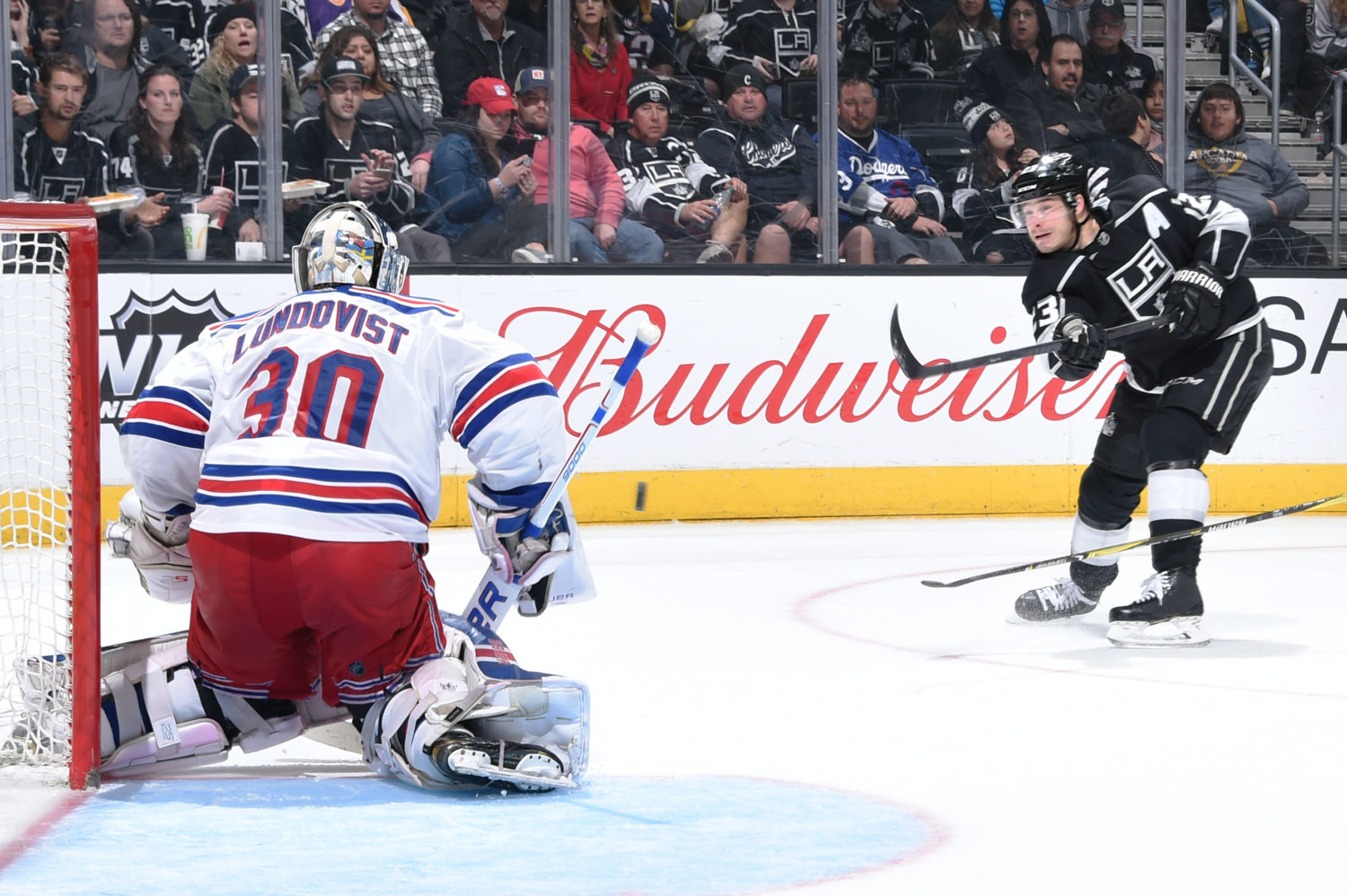 I didn’t see anything really wrong with the Kyle Clifford hit on Smith late in the first period. It was whistled for a charge, though interference could have been applied, and that’s likely where any sort of discipline will end. It was a massive hit that he laid, with his forearm making direct contact with Smith’s sternum before his arm lifted up and made a glancing follow-through to the defender’s chin. The chin wasn’t the principal point of contact, nor did it appear to weather any substantial contact. ” It’s a hard game,” Clifford said. “You get hit and you deliver hits.” A two-minute minor was warranted; all parties will move on. 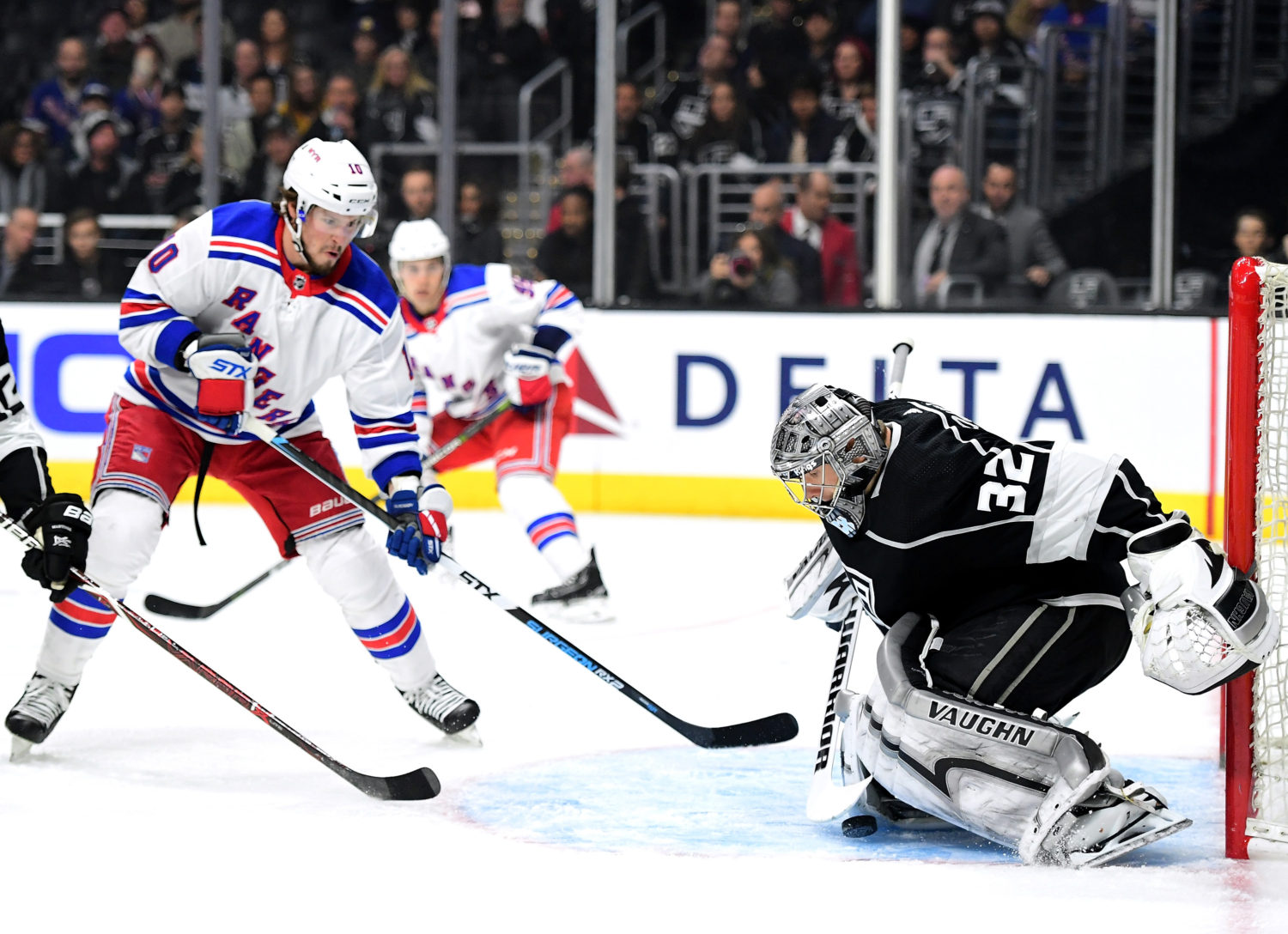 We’ll see if the Dustin Brown adage holds true with a pair of important divisional games on the docket before the All-Star break. Before Sunday’s game, Los Angeles etched out a pair of performances that may have missed several greasier, competitive elements but still represented improved checking and strong structured play that continued into Sunday’s game. Given the lack of let-up in the schedule – is there really ever any let-up in the parity-heavy NHL? – and the need to continue to solidify footing in the playoff picture, it would behoove the team to find a way to win at Vancouver on Tuesday to set up an important road game against one of the teams they’re battling for a playoff spot on Wednesday in Calgary. Whatever momentum they’re able to build will likely be blunted by the break, so this two-game stretch should allow for some prime focus for a team right in the thick of the Western Conference playoff race. 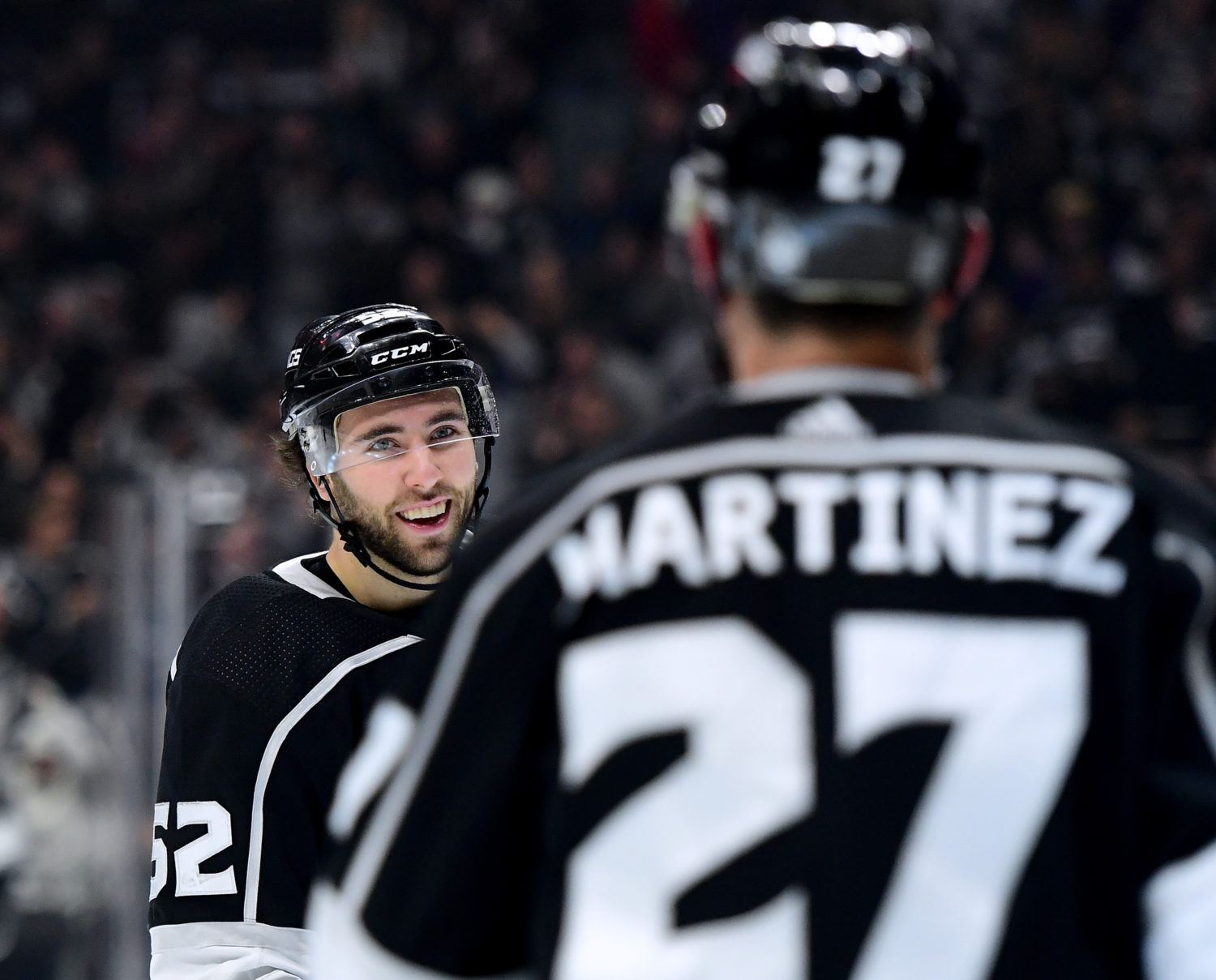