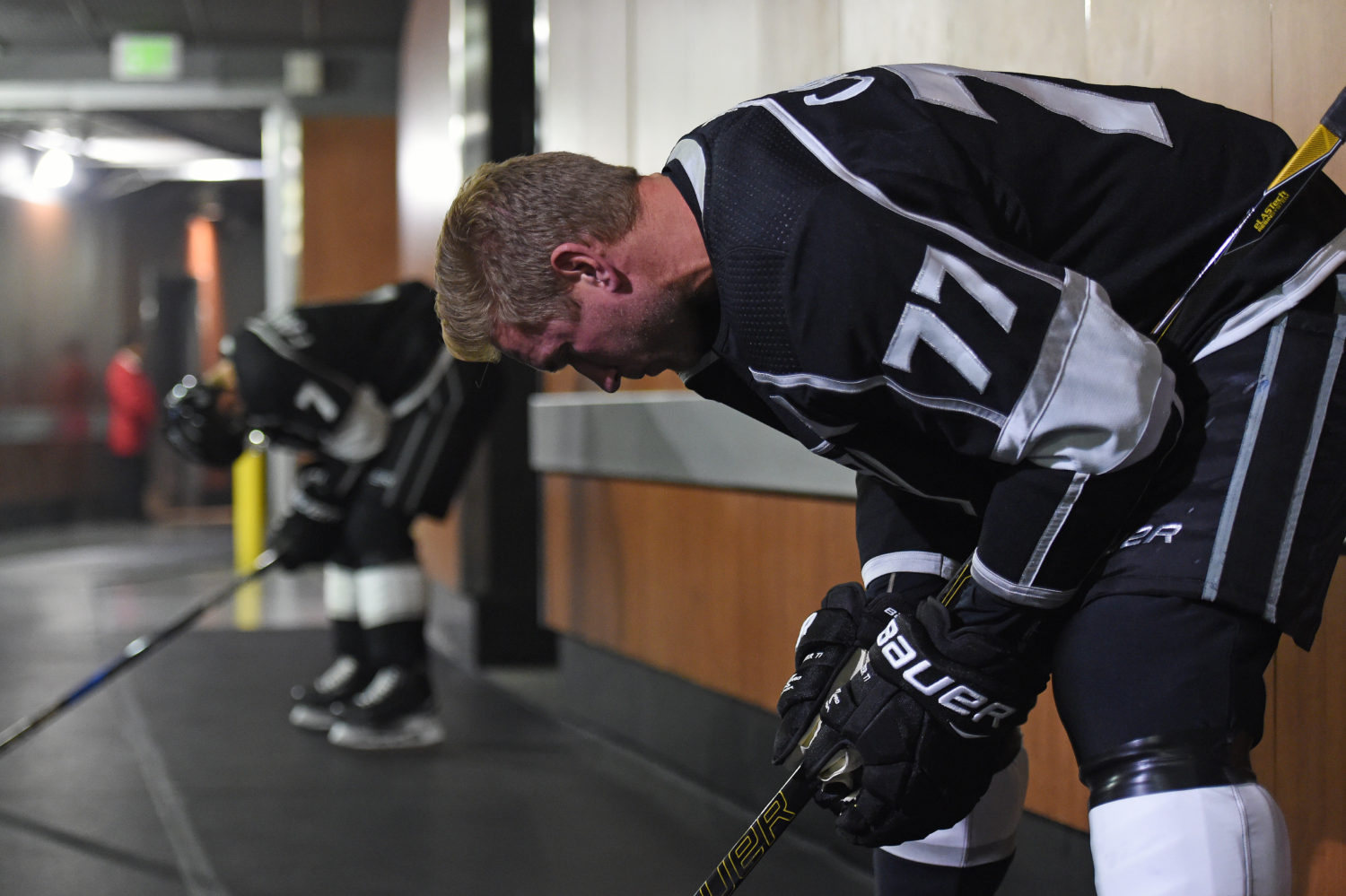 Jeff Carter has been limited to six games because of a deep cut that required surgery to repair a tendon in his ankle, and yet the Los Angeles Kings are on pace for 106 points, a full 20 points better than their fifth place Pacific Division finish a season ago.

For Rob Blake, this isn’t a surprise. The resurgence to a more familiar perch in the standings has been based less on hope and more on “probably everything that we thought.” Internally, there were well formulated expectations that the team’s accomplished core would rebound to previously established levels of production.

“Our big players are really good,” Blake said. “I don’t think we ever questioned how good Kopitar, Brown, Quick, Doughty, Muzzin, Martinez, Pearson, Toffoli [are]. They’re good players, and when they play well, your team will have success.”

Their personal numbers speak of the overall health of the team. Anze Kopitar is on pace to set personal highs across the board. Dustin Brown, who combined for 51 goals over the last four seasons, is on pace for his first 30-goal season since he was 23. Drew Doughty, Tyler Toffoli and Trevor Lewis are all on pace to meet or surpass career-highs in points.

As such, Los Angeles is firmly in second place in the division, five points shy of Pacific-leading Vegas and seven points clear of the playoff floor. The path to get to the seasonal midpoint hasn’t necessarily been straight and smooth, but the same can be said for virtually any team that isn’t the 1984-85 Edmonton Oilers.

There have been structural implementations that have placed high value on creating chances from the forecheck, allowing defensemen to join the rush, as well as exiting the defensive zone and entering the attacking zone. The players’ adaptations to loosened restrictions on creativity and their ability to get pucks into harder areas have spurred a significant spike in the team’s five-on-five shooting percentage from a league-low 6.1% in 2016-17 to a healthy 8.1% this season, placing them 13th in the league.

“At the midway point, we’re happy with where we are in the standings, but I’ll be honest with you: we’ve got lots of work to do as a team,” John Stevens said. “If I had to look back and go to the year and try and do things differently, I think there are always things that happen during a game where you’re always going to try and analyze, ‘could you do better?’ We’re very comfortable with the intention of the players and the staff of what we’ve done at this point of the season.”

Though the club’s possession rates have dropped from the heights set throughout much of the decade, the overall health of the team structure and the players’ willingness to check and retain their defensive identity remains a strength.

“I don’t think you’re going to pick one specific spot and say, ‘this is what the team does really, really well.’ I think they do a lot of different things,” Blake said. “A lot of it depends on the team you’re playing and what kind of resistance they’re giving you. But, again, when you have a lot of really good players within a structure, within a system, they become creative, and that’s what you want them to do.”

As much as the core has been rejuvenated and is playing with added freedoms and creativity, the Kings have also received phenomenally good minutes from their goaltenders, who’ve combined to lead the league with a .927 all-situational save percentage.

But given the drop in possession and the more frequent chances they’ve yielded, does it mean the team is relying too heavily on Jonathan Quick?

They’re also relying on a coach whose first season behind the Los Angeles bench couldn’t have been blueprinted much better from a results standpoint. The club is on pace to record the most points in team history. But there have been challenges in which Stevens has kept the team afloat and minimized the inevitable periods of inconsistency. That the team has had its center depth and defensive depth challenged in the first half of the season makes the club’s 13-7-2 road record all the more impressive.

“[Stevens is] a really good communicator, and he has the guys believing in the right things to do,” Blake said. “He took it right from day one on the phone with these guys building the trust and the personality part of it. I see it carrying on through the season at different times in some of the stuff he does behind the scenes that nobody will know about. He’s really, really good at building these relationships with the players.”

During the spring and early summer months, Stevens made a point to meet with every player, traveling as far as North Dakota, Minnesota and Ontario in addition to various stops across the South Bay. There’s no way to be able to measure this with data, but it accentuates the relationships that Stevens and his staff have maintained with the veteran group and has allowed the team to play with better emotion and creativity, which has had an impact on the team averaging better than a half a goal-for per game.

“We get lots of feedback from the players,” Stevens said. “So, we’re very comfortable in hindsight looking back and how we’ve executed the plan to this point, but having said that, we know that we’ve only gotten to a point where we’ve gotten ourselves in the middle of a battle for a playoff spot, and we’ve got an awful lot of work to do to fulfill that goal we set at the beginning of the year.”

Jeff Carter (IR/ankle surgery) has been spotted at times around more public areas of the team’s facility and has been seen observing recent practices. He’s shed the Roll-A-Bout and the crutches and is much more ambulatory than he was some six weeks ago.

“Walking around, finally. Real nice to see him walking around,” Rob Blake said. “I don’t know when he’s going to be back, but he is progressing. He’s walking around without a boot on, and he actually looks pretty good that way.”

As Blake noted, it’s still to early to put any sort of a timetable on his return. But there haven’t been any setbacks to this point or anything that might potentially push it back.

“Progression-wise and everything he’s doing right now shows he will be back this season,” Blake said.

Again, any ballpark of a return is yet to be set.

“I think once he gets skating, we’ll know a lot more,” Blake continued. “Has the tendon and everything started to heal? Yeah. But, there’s a lot else because he’s been immobile for so long that needs to be worked on. But all the steps taken, there’s been nothing that’s slowed it down.”

It’s still too early to presume that he will start skating lightly in the coming weeks.

“He’s progressing up here. [He’ll begin to skate lightly] once he gets to certain levels,” Blake said. “But there’s been no saying, ‘OK, January 17, you’re going on the ice.’ We haven’t put anything like that into it at all.”