Stevens on Brown, Iafallo, video pre-scouting, influences on his career 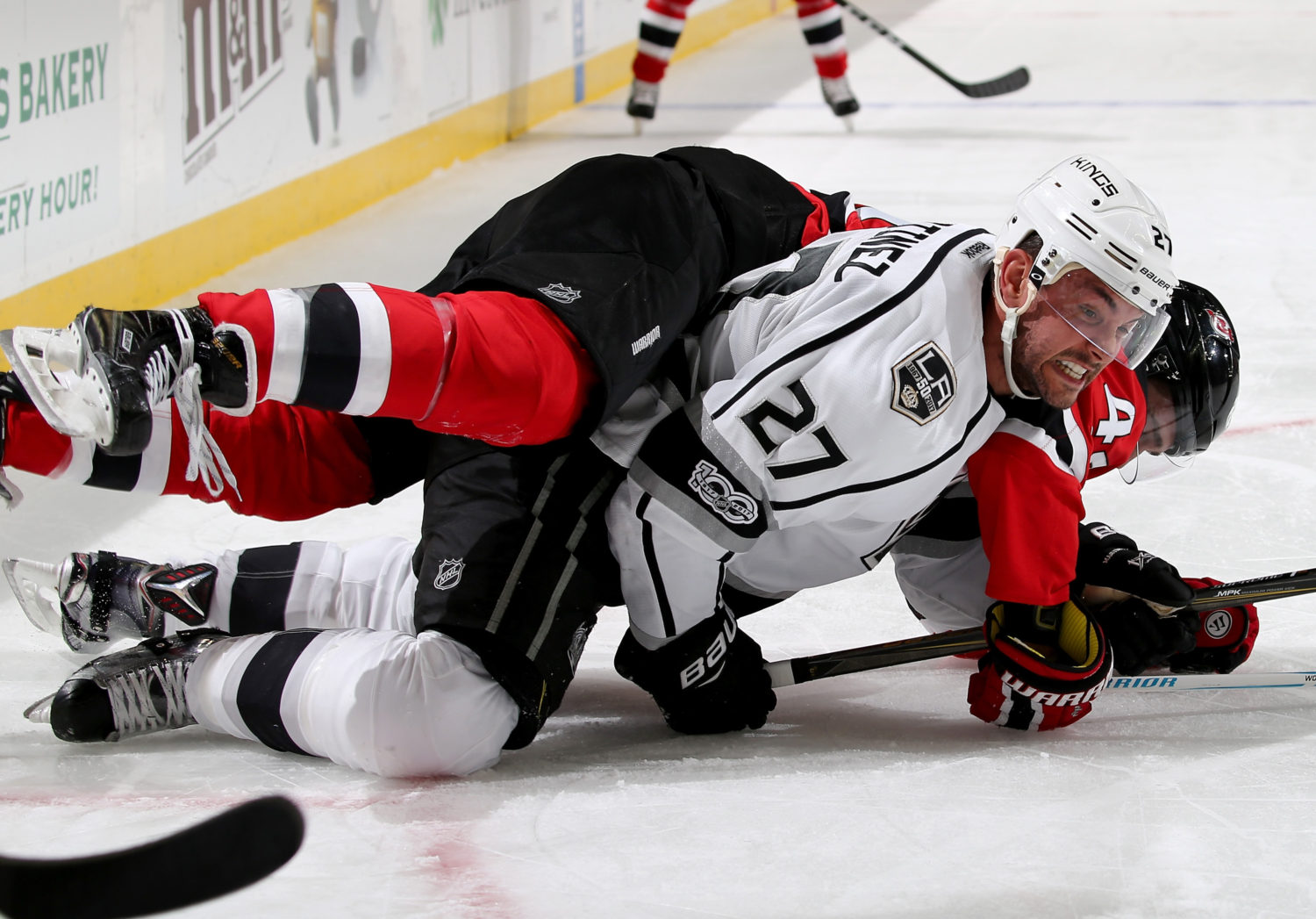 On any “common bond” between the eight straight wins:
Probably not. I wouldn’t say there is a common bond. I think we’ve had a lot of different games that unfolded differently, but through the whole course of it we’ve had really quality play from our goalies, no matter who plays. I think our team plays really hard without the puck. Kopi and Brownie have really led the way offensively and Tyler and Tanner have really come around, but I think we’ve gotten production from up and down our lineup, and I think our team’s played really hard without the puck, and I think our goaltending’s been outstanding, and when those things are in place, you usually have a chance to win.

On whether he believed Dustin Brown had this type of bounce-back season in him:
I think it’s easy for us to look back in hindsight. Hindsight’s 20/20, but I can honestly tell you I sat down with Brownie, and if you watched parts of his game, I thought his game was trending in the right direction last year. I think Brownie got away from what makes him successful for a period of time, and I think he realizes that it was the type of game that he needs to play – more of a straight ahead, power game, more time around the net – and if he does, we felt he trains well, he takes really good care of himself, he plays every night, he plays hard and I think the fact that he’s been reunited with Kopi in all situations has really kind of settled him down a little bit. He’s earned the right to do that, but I think we were really confident that his game could come back.

On what Alex Iafallo has done to remain a fixture on the top line:
Alex is one of those guys, he just brings a lot of things that maybe don’t show up on the stat sheet that make the line effective. I think he’s a really tenacious forechecker, he gets in on the forecheck, he’s got a really good stick, he breaks up a lot of plays, he’s got good hands, he can make plays. He hasn’t produced offensively like I think he will over time, but I think there are so many ingredients on the line that we like that it’s been hard to take him off the line. They like playing with him, but we as a staff liked what it brings to the line. He’s a very responsible guy, but he’s not intimidated by playing with star players, and he’s the same player there as when we move him down. There’s been lots to like about his game, and it’s the little things that complement the line that is the reason he stayed there. [Reporter: Is it fair to say he’s been a relatively nice surprise for you this year? Someone that kind of came out of nowhere?] I think everybody in the organization liked him when they signed him, you’re just not sure if it translates or how quickly it translates. Some players, it takes longer, some players get intimidated by the situation of playing at this level, but he looked really good in the summer development camp, he looked really good in rookie camp. We got a chance to get eyes on him a little more when we got back from China, and he continued to impress, and we all felt he deserved to make our hockey team. Just every challenge we put in front of him, he seemed to continue to pass and impress. To say we were ‘surprised,’ we were surprised – we didn’t know him that well – but I think the organization deserves a lot of credit for doing their homework.

On what stands out with the New Jersey Devils:
Well, I’m just impressed with how much responsibility they’ve given their young players and how well they’ve done with it. You look at their top scorers, a lot of ‘em are young kids that you haven’t heard of before that are making a mark in the league. It’s impressive, the skill that they play with and how tenacious they are on the puck, and I think in a combination of that, they’ve really increased the mobility in their back end. Butcher’s another young kid that’s come in and really played well on the back end, but there’s lots of them. There are some older guys that have been in the American League for a while that are new to the league that have played well, so I think the thing that impresses you the most is the quality of contributions they’ve got up and down their lineup from whether it’s young players or inexperienced players, they’ve done a really good job of trusting those players, and they’ve been rewarded for it.

On whether he looks at teams’ best performances when using video to pre-scout:
Well, we have an ‘A,’ ‘B,’ and a ‘C’ game on every opponent we play, but we’ve had an eye on them all along. We steal those underlying analytics from Jon Rosen, some of that insight on what to expect, but we do get analytics that tell you the areas of the game they’re really strong in, and that’s over the course of a year, and then areas of their game that haven’t been as strong as other teams, and it tells you something, right? I think they’re a really good forechecking team, I think they create a lot off the forecheck, I think they go to the net extremely hard. Even their guys that are undersized are extremely competitive on the puck and they have a skill level to make a lot of plays. They play hard. They’re a lot like the team we played in Carolina recently, where I would say they have some real bite and physicality to their game as well. I’ve been impressed with their team. We’re not going to go off what’s happened lately, and if anything, we’re going to know that we’ll get their best game tonight knowing that they haven’t been happy with the way they’ve played.

On whether it’s helpful that the team hasn’t had the cleanest finishes in regulation to recent games:
There is. Outside of you guys mentioning it, we haven’t talked about it. This is a big game on the road where we’ve had a couple days prior and a couple days after, so it’s one game we’re focusing on, even on a road trip. It’s no different from what we’ve done all year. There’s parts of the game where we really liked, but by the third period we kind of looked like we let them take over and got on our heels a little bit in overtime, but our guys have this knack for finding ways to winning games like that. You get a great performance from key guys. It’s no different than any other time during the year. It’s one hockey game where we’re going to try to improve our team game, and that’s our whole key all along. We want to continue to get better at our team game, we want to continue to get better as a group. Sometimes it’s the individuals that have to get better, sometimes there’s parts of our game that have to get better, but I think our focus from day one has been to try to get better every day.

On influences that provided a solid foundation in his coaching career:
Jeez, there’s a long list of people I could credit, but it’s probably the Flyers organization with Paul Holmgren and Bob Clarke. I think everything I had in hockey I’m indebted to them for, both playing, and they drafted me. [They] brought me back as a player, and when I got injured, gave me the opportunity to coach before I was probably ready knowing that I’d work hard at it. They gave me enormous opportunity in hockey, and I owe a lot to them. [Reporter: When did you know you wanted to be a coach? Was it right around that time?] I think when you get to be in your late 20’s in Hartford, I actually talked to them about getting into coaching, and I think my dream of playing in the NHL was kind of going by the wayside, but I was still a good American League player and I could still help young players a lot, and I did that when I came back to Philly. But it was Clarkie that came. We won the [Calder] Cup in ’98. I as the captain, and as we were celebrating in the locker room, he pulled me aside and said, ‘I’d like [you] to go to Roger Neilson’s coaches clinic.’ I was still playing. He said, ‘I think it’d be really good for you.’ I said, ‘I’d love to go.’ He sent me to that clinic, and I probably won five or six years in a row and tried to continue to learn, and then I got an eye injury where he called my wife before he called me and told my wife I was going to coach. It’s just kind of the guy he is. But if you know Clarkie and Homer and those people, they’re as good as it gets in the game. My family owes them a lot. [Reporter: Do you have anyone here tonight – friends, family?] Not usually, but my son’s playing in Bridgeport – John – so he’s actually going to drive up for the game. It’ll be good to see him. I haven’t seen him since the summer.