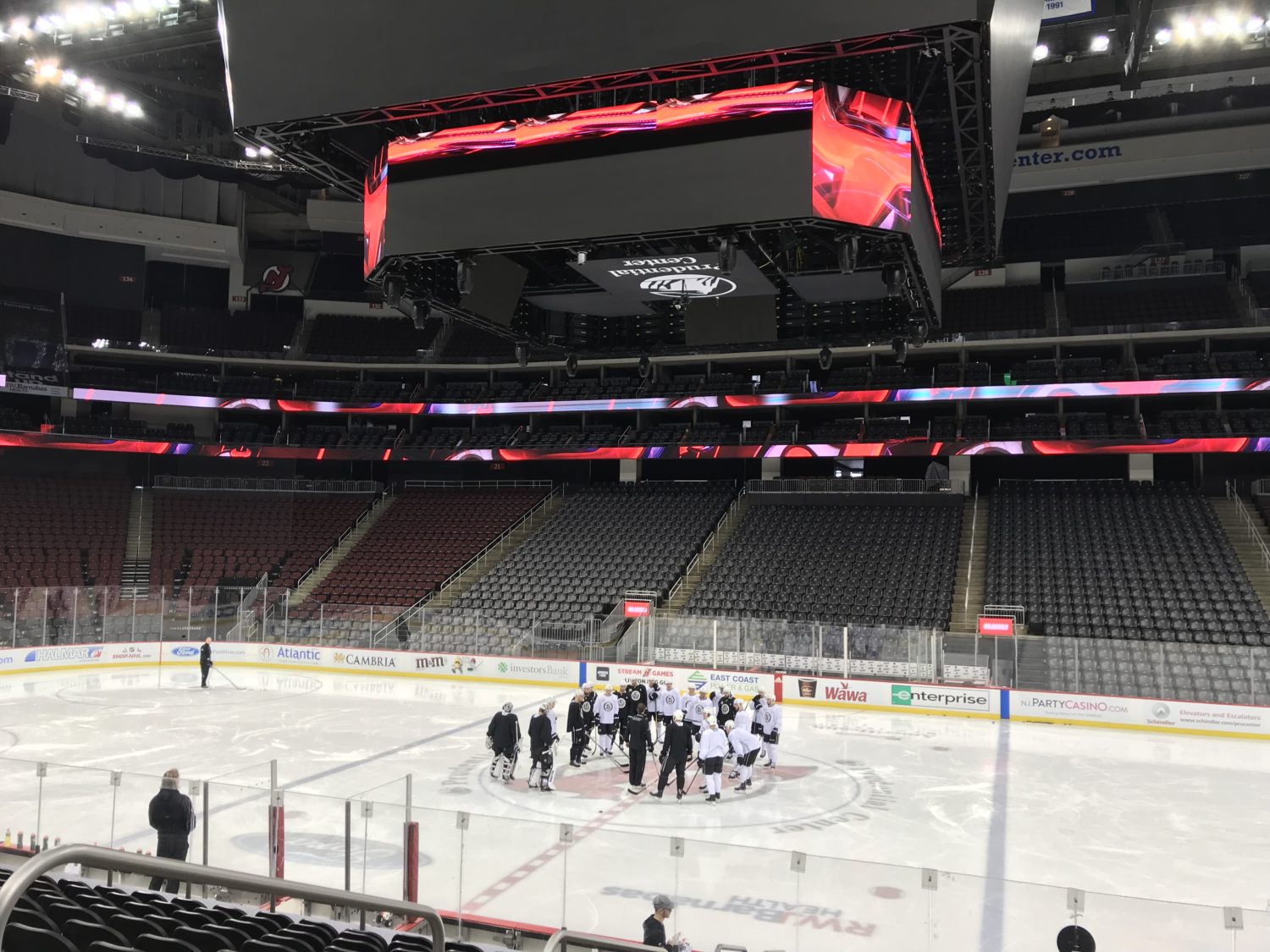 A very pleasant afternoon to you from the team hotel, Insiders. The Kings skated at the Prudential Center at 11:30 a.m. Tuesday morning and aligned as such:

-Jonathan Quick left the ice first and is projected to start against the Devils (4:00 p.m. PT / FOX Sports West / FOX Sports GO / FUBO TV / KABC 790 / I Heart Radio). He’s 4-2-2 with a 2.05 goals-against average and a .929 save percentage in his career against New Jersey, but hasn’t faced the Devils since John Moore’s overtime game-winner at Staples Center in a 2-1 loss late in the 2015-16 season. Because of injuries, he’s only played one of a possible four games at the Prudential Center since the 2012 Stanley Cup Final, a 3-1 win on March 23, 2015, in which he stopped 19 of 20 shots. That game gave us this excellent Andy Marlin photograph of a Tyler Toffoli five-on-three goal: 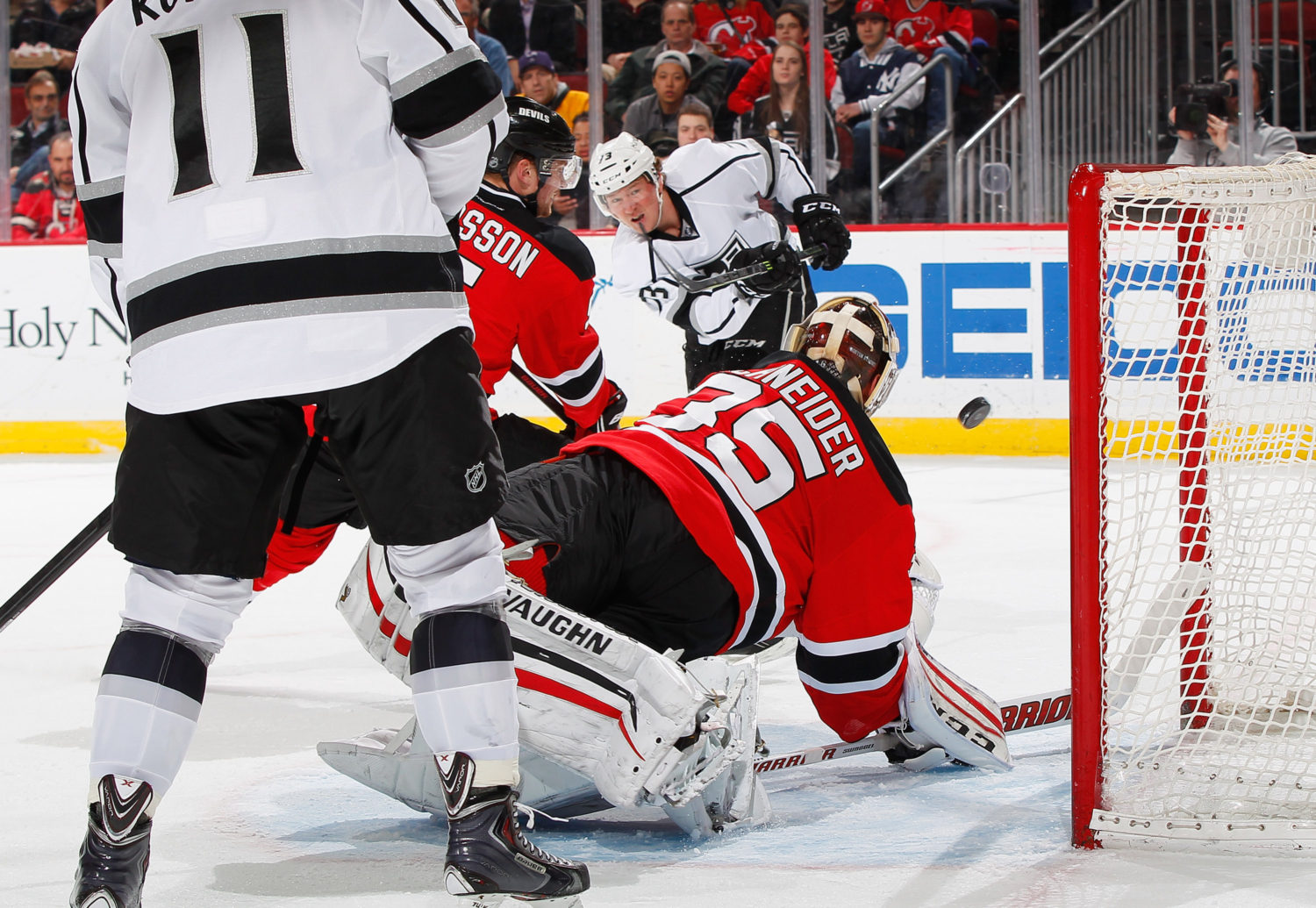 -OK, let’s talk Adrian Kempe. He didn’t participate in the morning skate after getting sick in transit. “He was a little ill on the plane yesterday,” John Stevens said. “Just had him stay at home here. Little bit of an appetite back, so we’ll see where he’s at. Just left him home here to try and get some rest – or, at the hotel, rather.” It’s not yet clear whether he’ll be able to go, so the above lineup projection would not come with an “A” grade in the “level of confidence in projected lines” section of retired LAKI game previews.

-The projected lines are just that – projected. This isn’t an exact science. Adrian Kempe could recover and remain in the lineup, and that would push another forward out. So, it’s not 100% that Kyle Clifford plays tonight, but if he does, he’d have to be activated from injured reserve to return after a 28-game absence after suffering an upper-body injury in a collision with Calgary’s Michael Stone on October 11. (The Kings have an open roster spot and would not be required to make a corresponding move.)

“We’ve been at it for eight weeks here,” Clifford said. “There’s about four days off from the injury, and then we got right back into training and staying ready and getting prepared to play.”

A member of the team’s leadership group, Clifford has kept busy. He resumed skating in mid-November, was slowly integrated back into practice in late November, joined the team on the most recent four-game eastern road trip that bridged November and December, where he was more regularly integrated into practice, and yesterday engaged in battle drills. During this period, he still had the time to serve as Scoop Clifford of the Ayr News and got some reaction from Christian Folin after his go-ahead goal in Chicago two Sundays ago.

“Just being around the guys, you want to do everything you can to keep the spirits up and [have] good energy,” he said. “Especially because we’ve got a couple young guys, too, so it’s just helping them be prepared for the match-ups they’re going to face.”

Part of the leadership committee, Clifford makes sure that the younger players feel confident and incubated by the more veteran presence of those around him. Wasn’t it just yesterday that Fightin’ Cliffy played gritty, selfless role as a 19-year-old rookie? My word, time flies.

“I remember the guys that were there for me, and I thought they did a great job for me and help me progress to the next step and getting into a leadership role. I’m definitely thankful for guys like Greener and Willie and Stolly and those guys,” he said, noting that “Willie” applied both to Justin Williams and Willie Mitchell.

Should he go tonight, there won’t be any surprises towards what he’d bring.

“Cliffy, he’s got about a strong of an identity as you can find in hockey,” Stevens said. “I think with Cliffy, when he plays, you know exactly what to expect and what you’re getting. He’s a straight line energy guy that gets in on the forecheck, disrupts a lot of plays, really sound in his own zone and brings a real physical presence to the hockey team, so we don’t expect anything different.”

-Another sign we’re getting older: yesterday marked five and a half years since the Kings won their first Stanley Cup. Fittingly, the team was back in Newark on Tuesday, so I asked Alec Martinez of what he remembered about being in the visitors dressing room at the Prudential Center.

“I remember the biggest thing was how hot it was in this building,” he said. “We were leaking, and guys were getting IVs in between periods and after the game, on the plane ride home. I cramped up so bad in overtime when I came to the bench that my legs were just completely straight, and I was, ‘oh, man, this is going to be bad,’ and then Kopi ended up scoring the very next shift in overtime, and I was just, ‘thank goodness.’ That’s the biggest thing – just how hot it was. I think they kind of had a heat wave, and the rink wasn’t able to adapt in time, so it was pretty foggy and the ice was soft.”

All bad ice will forever be compared to the ice surface from Game 1 of the 2012 Cup Final. There wasn’t a surplus of clean, tape-to-tape passes in that game.

-Anze Kopitar is having a career year and is on pace for a shade over 100 points. That likely won’t hold, because he’s not going to shoot 21.1% for the entire season – his career-high in any season is 15.9%, set in 2007-08 – but it’s still a remarkable turnaround, given that Jeff Carter isn’t serving as a top center-slash-2C, essentially easing some of the match-ups when the team doesn’t have the first change.

Still, he’s going to face some of the toughest match-ups in the league, because he’s Anze Kopitar and Anze Kopitar will regularly face the opposition’s best players.

“Yeah, but I think if you look across the league, most players like him are drawing tough assignments every night, and we just think if he plays the game the right way and plays a really strong team game, he’s going to put himself in situations where he can have success,” Stevens said. “The other night’s probably a great example of his game. We go back, we have great coverage off a faceoff, we come up with a loose puck against one of the premier defensive centers in the league, but you just kick it out, go to the net, stick ready around the net. I think his match-ups are tough, but I think he’s put himself at a level where he can still produce in those situations like a lot of the top guys in the league can.”

–As noted earlier, Cory Schneider will start in goal for New Jersey. Marcus Johansson is out with an ankle injury, while Kyle Palmieri and Mirco Mueller remain on injured reserve.

-An F-Y-I for you: barring any inclement weather, the Kings will practice at Lasker Rink in Central Park tomorrow. Fun! The Rangers practiced there in early December on a 47-degree New York afternoon, though unlike Jimmy Vesey, Kevin Hayes and Brady Skjei, no Kings are expected to ride the subway up to 110th Street. 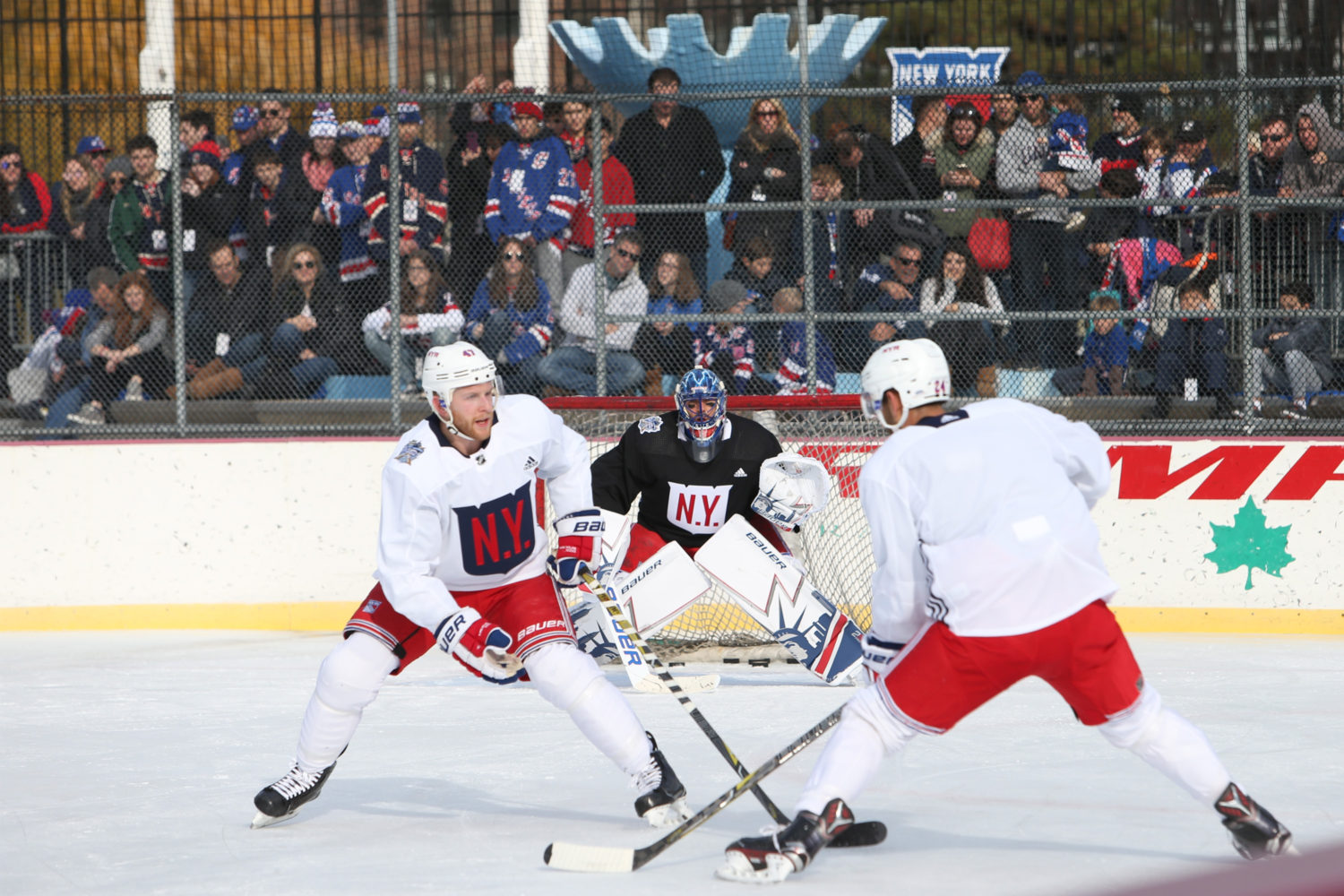