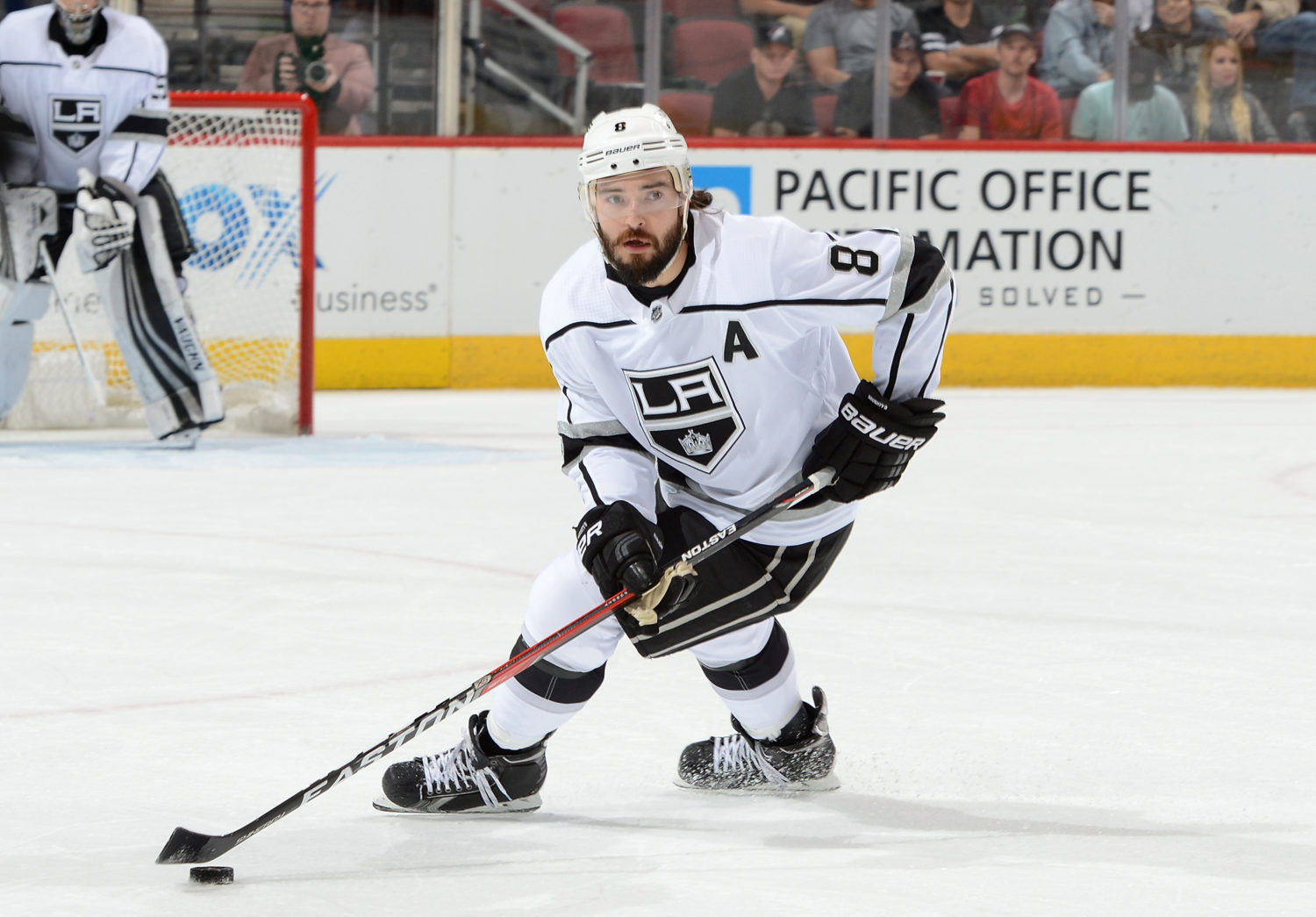 On whether it is a point of emphasis to capitalize on Drew Doughty’s skill and skating:
Yeah, I think Drew’s always been encouraged to be a part of the rush. The only thing we’ve talked to Drew about is we’d like to see him join the rush more, not lead the rush. He’s got such dynamic ability and he skates so well he gets by people, but he does have that mindset – people think of Drew think he’s a real offensive guy, but he’s got a real deep desire to be good defensively, so I think when he gets deep in the offensive zone, the warning light goes off in his mind that ‘I’ve got to be careful here.’ We have seen him up on the rush more this year as part of the attack, the fourth man on the attack, and it’s something we want to encourage him to do, but when there are numbers on the attack, go from position, and then you get in and get out, and assume your position away from the puck. We’ve talked about being a number on the rush and not a position, and I think he understands that.

On Marian Gaborik’s first two games back, and his 20 minutes in Saturday’s game:
We were chasing the game 1-0, and we lost Andreoff pretty early in that game, and then there was some overtime. They had a full shift in overtime there, which kind of led those minutes to pile up. That’s a lot of minutes, but there’s no issues with him physically. I think it was Gabby did a really good job of getting himself mentally ready to play, getting his mind around what he had to do to be a good player. I don’t think it’s easy coming into that point of a season when you’ve been off so long, and I thought he did a really good job. I actually talked to him today about that now that the first games are over, it’s a matter of keep getting yourself back to that point, because he got so revved up and focused on playing the first couple games, now the challenge is getting there every day. But he’s a good enough pro and he’s got enough experience. He’s a proud guy that preparation is important to him anyway, but it doesn’t hurt to remind him. [Reporter: Especially with Carter out, you need his offense, right? How do you use him to maybe fill some of that hole?] Well, you have no goals from Carter or Gaborik in your lineup yet this year. I think we’ve asked more of other guys. Certainly, the center ice position is something that’s been ahole there with Jeff out. Adrian’s filled in there quite a bit, Shoresy’s filled in there quite a bit. We’ve had different guys coming in there – Jussi Jokinen, Brooks Laich, Dowder, and now with Mitchell coming on board. But certainly, the early part of the year, when we were scoring more, we were getting lots of secondary scoring that’s dried up a little bit, so we’d certainly like to get some contributions from other parts of our lineup. We know teams are going to focus on the Kopitar line. We would too. They’ve been a big source of production. Games are tight now, and if you can get some production outside of those guys, I think it’s going to be huge for wins, especially on the road.

On Pierre Turgeon’s impact:
I don’t know if you know Pierre, but the first thing that jumps out at you is he’s got a really good personality, and he’s a quality guy with lots of energy all the time. I think the coaching, the whole thing, he hasn’t had a lot of experience coaching, but he’s obviously had a lot of success and experience as a player, so I think what he’s been able to do is outside of the structure and the X-and-O map that we provide, he can provide a lot of insight to coaches and players on those situations – not just what he thinks might work, what he knows works, because he’s experienced as a player. What’s interesting with Pierre is a lot of times he’ll point out some things on the defensive side or little things that maybe aren’t the high-end skill things, like a hold-up off a faceoff or better positioning, and I think good offensive players usually have really good positioning. He’s been able to add some insight from a player that played the game at a high level that we hadn’t had before. [Reporter: Has he functioned as an offensive coordinator type as you hoped, or has it been more like a traditional assistant coach?] Well, I’m not sure what your vision of an offensive coordinator would be, and I know in football they’ve got a sheet in front of them and they’re calling plays from a far, but he does track scoring chances for us – where they’re created from, how they’re created, who’s getting them. He does look at faceoffs, he does study the shootout and the goalies. He an Billy Ranford together look at those parts of the game. He looks at the net-front position for us and offers his insight in those things. I don’t know if it’s the traditional ‘offensive coordinator.’ I think the only time we’ve heard that time is in football, but he certainly is going to have a big focus on trends in the offensive side of the game for us, and things that we like and things that we think we can do better – stuff behind the net, how we can better use the areas behind the net to create more – so his focus has been there, but I’m not sure we have a job description for an ‘offensive coordinator.’ But his focus has been on the offensive game as well as the overall game planning with the hockey team.

On having allowed the first goal in 15 of 24 games, and the importance of getting off to a good start:
You’ve done your homework. Obviously, it’s a well-documented fact, and I think it’s changed a little bit, but teams that either get the lead or certainly leave the first period with the lead, their percentage of winning is high. That’s hockey, and you end up chasing the game, especially on the road, and the schedule’s heavy, and it takes a lot of energy, so I think going on the road, one, you’ve got to be ready to go. We thought today’s practice was important just because of the time change. It’s 8:30 in the morning for our body clocks for our players, but I think it’s important to really be ready to go off the start and be a real simple hockey team early. Manage the puck early, get pucks in deep, establish the forecheck, and then hopefully that backs teams off a little bit, because teams are going to come after you hard and teams are going to try and get established. Detroit’s lost some close games here. We know they’re going to come out ready, we know they’re a really good forechecking team. I think it’s important for us to force teams to play through us and not have unforced errors that put us behind in those situations you’re talking about, and I think discipline plays a part in that, too. You don’t want to put teams on the power play early in hockey games. You want to be willing to do the work moving your feet and hopefully spend time in the offensive zone where penalties are drawn and not taken.

On whether Jussi Jokinen’s presence can cap Anze Kopitar’s minutes, especially on the penalty kill:
We’ve actually done that, believe it or not. We were probably one of the few teams in the league that used eight forwards and not five or six, or four. If you look at the last few games, the number of shifts hasn’t been the problem. The length of shifts has. Two games ago, he and Brownie had two long PK shifts against Arizona. There’s just too many times in a hockey game where the shift length goes over a minute, and sometimes that can’t be prevented, but sometimes it can. And I talked about this early on, but sometimes Kopi, especially in a game you’re down 1-0, he might get a puck in the neutral zone and its late in the shift and he sees an opportunity to attack again, and now you have to stay out because you’re usually backchecking a play out of the offensive zone if you don’t get a faceoff. I just think we need to manage the length of shifts a little more. If you look at the number of shifts, the number of shifts is fine. It’s the length of shifts that’s putting his minutes where they are. If we could get him somewhere around the 20-minute, 21-minute mark, I think it’d be ideal for him. Certainly, the other night, and again, I think it’s a little bit to do with almost a three-minute shift in overtime that finished the game, right? He played the whole two minutes and then got stuck out at the end on a four-on-four situation. It’s something we’re aware of. Kopi, he can handle the big minutes, he’s a durable guy. I’d like to see more shifts with shorter length than I would to see less shifts and a longer length.

On whether he changed anything “systematically” after being named head coach:
I wouldn’t say ‘systematically,’ but we had a couple new coaches, and I think any time you add new coaches to your staff – with Dave Lowry and Donnie Nachbaur and then Pierre coming in – we really spent a lot of time as a staff just talking through all situations, and sometimes it’s terminology, sometimes just a little bit of a different mindset. We have tried to play faster in the neutral zone. We try to get pucks up to speed quicker, we’re trying to not slow it down by a lot of D-to-Ds, those types of things, and we’ve put a little more focus on some structure in the offensive zone, but in terms of the overall belief in how we play and structurally how we play, I would say it’s very similar, especially defensively. But I do think with the addition of some new coaches here and some fresh ideas, I think fundamentally we’re about the same, but there’s always a wrinkle here, a wrinkle there. I think the term ‘faster,’ Dave and Don both had some good, fresh ideas of how we can do that, but I think overall, in terms of without the puck, we’re for the most part fundamentally the same. I think offensively we can try to put some structure in place that can help us.

On whether Torrey Mitchell could be available tonight:
Not sure. He’s not a definite go yet, but I’m not sure.