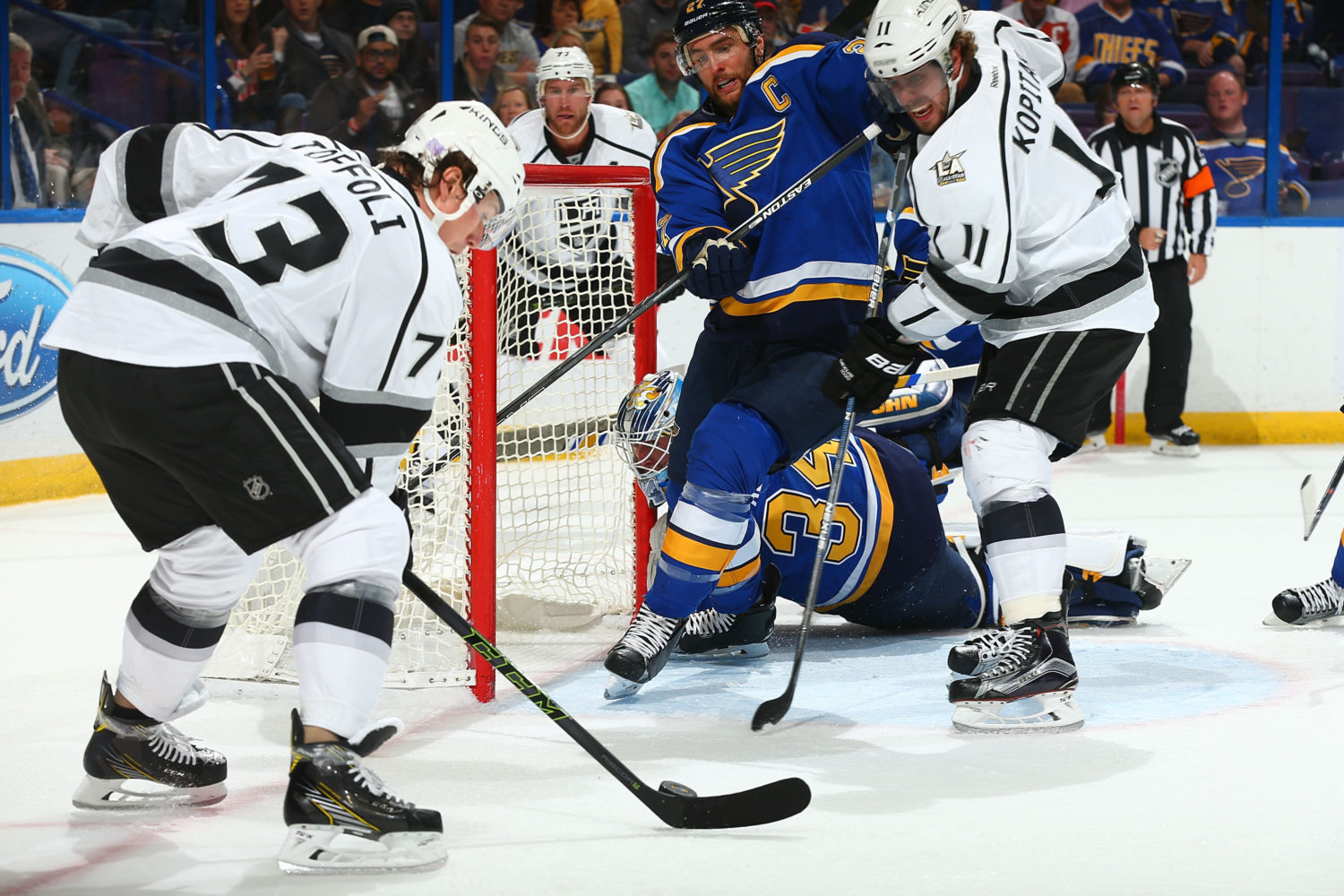 On the day before the first preseason game of the 2017-18 season (Vancouver, Staples Center, 2:00 p.m. NHL Network), the Los Angeles Kings held their most concerted power play work of a nascent training camp, and lo, there were changes.

On the top unit, Michael Cammalleri, Jeff Carter and Anze Kopitar lined up as forwards as Tyler Toffoli and Drew Doughty manned the points. There was ample movement; such positioning didn’t always remain that way. Toffoli drifted lower towards the half wall, and Doughty often was found straight away, at the top of the key. The plan? More one-time opportunities from high-danger areas closer to the net.

“I think with the upcoming practices too, we’ll kind of work on passing it to the right spots where we want our one-timers and … the movement is most important,” Toffoli said. “Same with the other side – not getting caught on odd man rushes. That kills teams. So we’ve got to be smart with it, but we want to obviously score goals.”

It was a different look for the second unit, which featured familiar presences in Jake Muzzin and Alec Martinez on the blue line and a forward contingent of Tanner Pearson, Adrian Kempe and Dustin Brown.

“Obviously units are different, personnel is different,” Brown said. “But we as a group talked on our little unit that we’ve got to be shooting the puck a lot. We don’t have the skill, probably, of the other unit – the top end skill with Kopi and Dewey. We’re a different unit. We’re going to grind. Like, if you look at our types of guys, you’ve got two shooters up top, you’ve got me and Tanner who are going to work the corners, and you’ve got Kempe, who has the skill and the vision to do it all. So, it’s just playing to your strengths, really, and I think the biggest thing is communication on the power play because if we’re all on the same page, it becomes much easier to recover pucks, keep pucks and understand what we’re doing.”

And this isn’t to say, in all caps, MY WORD, THESE CHANGES WILL BE PROFOUND. Tomorrow will be the first preseason game. There are still nearly three full weeks before the season opener. On one hand, the foundation of structured special teams play is being laid, and on the other hand, this is hockey: if goals aren’t being scored, adjustments will be made, personnel will be swapped, and the team will continue to search for avenues through which they may find a special teams advantage.

“I think the first day you want to try different things and see how it looks,” John Stevens said. “The one thing we did do, we did some research and I think 80% of the teams in the league use four forwards on their first unit. You’ve got a guy like Tyler that I think’s an elite scorer in the league. You’ve got a lot of pieces there. It’s not that we don’t think two D works, but it’s certainly something based on what’s gone on around the league and the success that teams have had, to look at putting guys together that have a high, high offensive hockey IQ is something that I think’s worth looking at. And not only that, every guy on the ice is responsible defensively, so you’re not taking a huge amount of risk to get the puck back, or teams attack the other way. You’ve got Kopi, Carts, Ty, they’re all really, really responsible guys. They’re three of the better two-way players in the league, so we think it’s worth looking at, and that’s something that we want to take a longer look at.”

Again, it’s early, but there was good movement both with and without the puck, and it was clear early on that the types of looks on the man advantage were different than before. It will be very interesting to watch such installations come into form throughout the preseason and beyond.

“I mean, it’s early,” Brown said. “It’s just getting your feet under you, getting comfortable. Throughout my career, whenever I’m on the power play, I’m around the net, in front of the net. I think they’re trying to set up some new ideas on the power play to generate more shots from the center of the ice. Just, like I said, it’s very early, but if you look at how the units are set up, it’s one-timers in the slot. When you’ve got Cammy and Kopi on one side with Carts in the slot on their unit, and it’s Tanner on our side, it’s just trying to put guys in the best position for them to score. The power play, I think you have to work on every day if you’re going to be a really good power play.”

Stevens confirmed on Thursday that assistant coach Don Nachbaur would oversee the forwards and the power play. Under Davis Payne, who held a similar role from the 2012-13 season through 2016-17, Los Angeles was a middle-of-the-pack power play team, finishing 16th over that span with an 18.3% success rate.

“I think last year we kind of played around with it a little bit. I talked to Johnny and some of the guys and I found out yesterday about it,” Toffoli said. “But just to kind of spread things out about a little bit more and give us a little more space. A lot of teams are doing it now and having success, so hopefully we can play around with it in the preseason and be successful with it and keep it together.”

Tyler Toffoli, on his earliest impressions of the power play:
Obviously it’s different when you’re going 5-on-0, but once we had some guys in there it was good to have a little more traffic and more movement, and like I said, spread things out a little more and create more opportunities for us.

Toffoli, on his role on the power play:
I think when I get the oppportunityh to shoot the puck and it’s open to shoot it, I think I feel confident when im in that spot of the ice that I can score goals, so we’re testing it out and seeing if we can make it work, and going from there.

Toffoli, on how to avoid odd-man rushes with four forwards on the power play:
Just the communication is really key. Got to be aware with who’s on the ice and who you’re against is definitely one of the more important things as well. Like I said, just test things out and see how it goes.