Campbell reinventing himself, his game in unpredictable comeback season 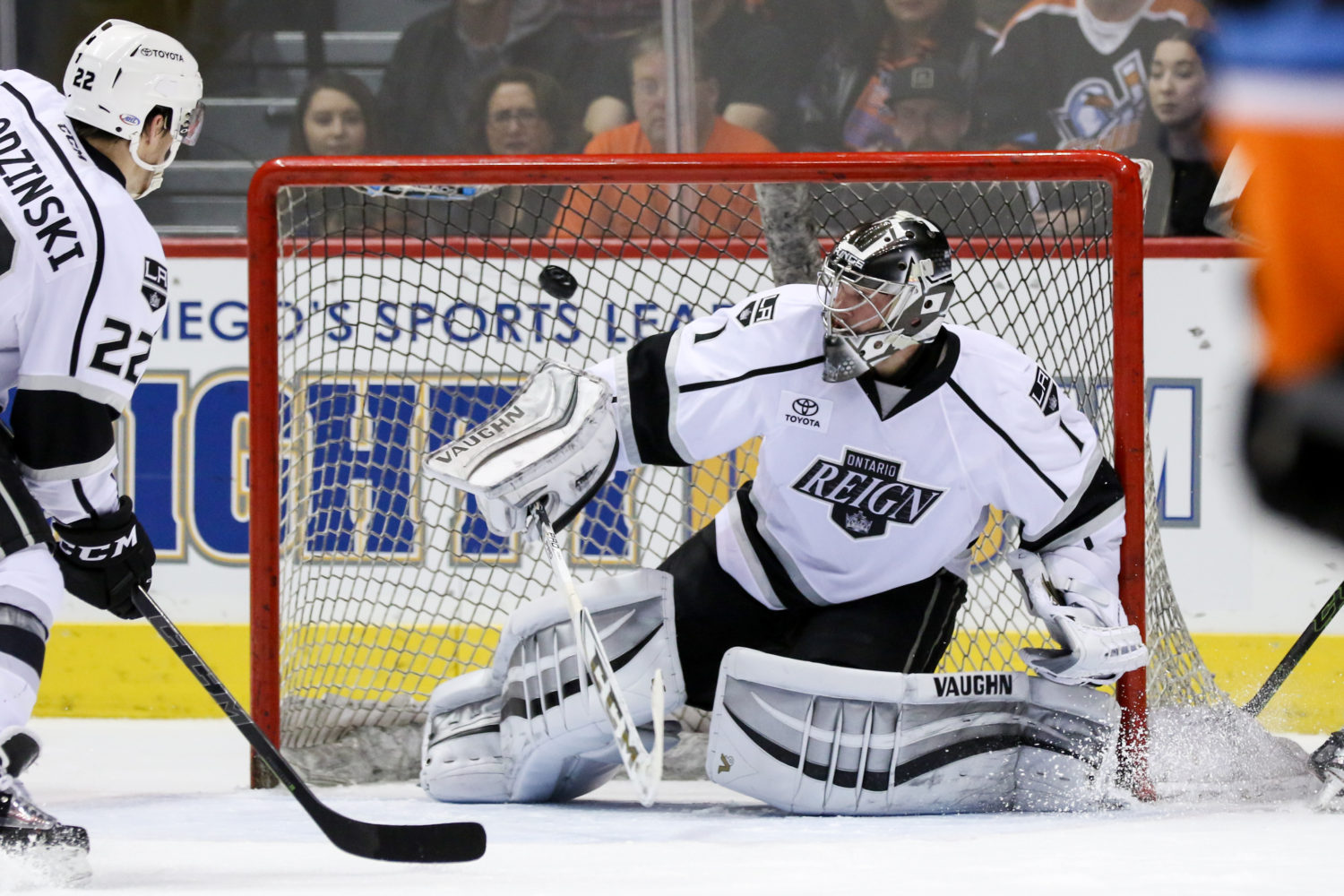 Jack Campbell has come a long way since his days of ordering Cherry Coke Icees after practice as a kid.

Now his pregame habit includes a pit stop at Panera Bread for a coffee and a … Cinnamon Crunch bagel.

“With butter and peanut butter,” he said. “Some days cream cheese. It just hits the spot. I usually eat half of it and then that’s good, it just tastes really good.

“He” likely refers to coach Mike Stothers but why should Campbell mind? The 25-year old is having fun and doing this season his way while in the midst of a run no one imagined.

Ontario entered the year with Peter Budaj, the reigning AHL Goalie of the Year, slotted in for No. 1 work after taking an offseason chance on Campbell. The former first round pick, No. 11 in 2010 by Dallas, was to be simply slated for a fresh start to play behind a defense-first team when he was acquired last June.

Instead, an injury to Kings goalie Jonathan Quick turned this year’s storyline in Ontario into an unexpected one. This has not just been a new beginning for the 6-foot-3, 195-pound Port Huron, Mich., native but a complete transformation and a display of dominance.

“The day I was drafted to the Dallas Stars I always told myself I’m going to play 20 years with the Dallas Stars as the franchise goalie. That’s just what I had in my head,” Campbell recalled. “It started in Windsor. I struggled in Windsor, then I had a pretty solid rookie year in Texas playing 40 games, my second year I was lights out I was just hurt, my third and fourth year it was really a mental grind and that’s when it all went down.

“Then the day I got traded here [goalie coach] Dusty [Imoo] and I talked and just let it all go. It didn’t happen overnight but we were able to just put it behind me and right now I really don’t feel like I was really a part of anything other than L.A. It’s a really cool feeling. I could lie about it and say I’ve moved on and if I hadn’t it wouldn’t benefit but it’s cool to be able to look myself in the mirror and be OK with my past and just be like, well, I just love where I’m at now and I love where things are going and I can keep getting better here and that’s what I love about it is I have a lot of people here to help me get better and it’s just a really great spot.”

There’s a lot for his team to love. Campbell’s 26-12-6 and his wins lead the AHL. At one point he IronManned 36 straight starts, winning 22. He has more victories this season than he did starts in his final season with the Texas Stars. The Reign would be in a tough spot without him and his .912 save percentage and 2.59 goals against average.

He’s endearingly called “Soupy” but another term often used by Stothers to describe Campbell is “good person.” And that’s one of the main reasons why the coach and every player in the locker room is rooting for him in this comeback story.

“He’s got a great personality. He always seems to be having a good day,” Stothers said. “I know he takes it hard if a game didn’t go the way he wanted or he didn’t feel he played as good as he has. … It’s a team game and there’s things that happen during the course of a game that we needed to be better in front of him. You know what, the big thing with Jack is he would never, ever throw anybody else under the bus. If a defenseman gave a puck away right in front of him he would say ‘I should have come up with that save.’ So his teammates love him because he’s just a good person.

“He’s polite. He’s friendly. He’s engaging. He likes to talk. He’s well brought up. He’s just a good person. It’s hard not to like him. It’s hard not to root for him. And maybe that makes him different than some of the other goalies that you can’t talk to them the day of the game or you can’t touch their equipment, it’s like holy smokes, they got a million things, right? Soupy doesn’t seem, or at least he doesn’t let on, like if somebody was to brush against his pads laying on the floor before a game he doesn’t think, ‘oh no, now I’m going to have a bad night.’ He’s just kind of like, whatever, he just deals with it. So, he’s a good kid. He’s just a good person.”

It’s funny though (or foul, just wait) because Campbell wasn’t always so easy-going. There were awkward, youthful moments worth sharing. He admits his social skills weren’t great. He was shy. His game was loaded with by-the-book superstitions.

“Honestly I used to be really weird but now I just learned to have fun with the game,” Campbell said. “When I played with the U.S. program, like my draft year, I think I didn’t wash my laundry if I won so I went months without washing my laundry, which is just weird and gross. And I’d always wear my Team USA-issued jump suit thing to school and that’s not very cool. I just didn’t care. Just me back then. It was the ugliest thing ever.”

Somewhere, something changed: “I used to not talk at all and now I don’t shut up,” he laughed.

“I used to have this set routine, don’t get me wrong I still have a routine, which is great, but I used to be like if you looked at the clock everybody would know exactly what I was doing,” he said. “Now it’s just too many hockey games in a year to be that crazy. That’s strenuous. Now I’ll always take a nap usually before the game but say I can’t sleep, I used to freak out, now I’m just like, hey, I didn’t need to sleep.”

There’s a different measure too of taking the good with the bad, though there hasn’t been much “bad” to report — 12 regulation losses to his name. “[His] position’s very tough mentally but he does a good job of keeping hockey at the rink,” said his roommate, Andrew Crescenzi. “In his down time he doesn’t really worry about it, let it bother him.” In fact, in his downtime he’s usually playing video games headset style with a group of teammates or listening to country music videos — “I just crush that in my room,” he said — and inevitably ratting out Crescenzi for trying to rope him into watch “Gossip Girl”. Whether that’s true or not is up for debate, but what’s evident is Campbell is enjoying the moment and he’s flying under the protection of his teammates, who respectfully declined to reveal any of his quirks.

“Jack’s a great guy like everyone says but he has his quirks too,” captain and defenseman Vincent LoVerde said. “He’s an awesome guy and he really wants to help everyone out. He’s one of those guys in the locker room where he would do anything for anyone. I think everyone recognizes that. He’s been great ever since he’s gotten here. I know his past couple years, Dallas organization, if you ask him it probably wouldn’t have been the most ideal situation but I’m happy for him on a personal level. He was able to come here and have success and the credit’s all to him. He’s done a great job this year, he works every day, he competes and he wants to win.”

And so it’s been easy for Ontario to play in front of him. “When it comes down to it, he’s always focused and ready to play,” Crescenzi said. Just as the team faced its first losing streak since early November last week, it answered with a 5-0 drubbing of Tucson, Campbell’s third shutout. The next venture will be the Calder Cup playoffs and the opportunity for another tale in this unpredictable, but oh so memorable campaign.

“I definitely needed a fresh start,” he said. “Being that highly touted and then really just dropping the ball, you’re going to go through some stuff off the ice too, and I did, just as a person,” he said. “It was nice to be able to come here where guys just welcomed me as a teammate and everything else that happened on the ice because of the situation all the goalies were put in, that was great for my season to be able to play to gel with the guys being the guy who’s been playing a lot.

“But just as far as who I want to be as a person, it’s been great because I just think everybody on this team’s an awesome person and you can’t say that every team you play on so I think we’re fortunate to be part of an awesome group that’s truly close and that’s really special.”

They’re saying the same about him, too.

“He wants to compete and he wants to win,” LoVerde said. “You can tell from that and you can tell by the way he plays which is always good to see. It allows us to rally around him as teammates. You see him out there competing, wanting to win and it influences the rest of us.”