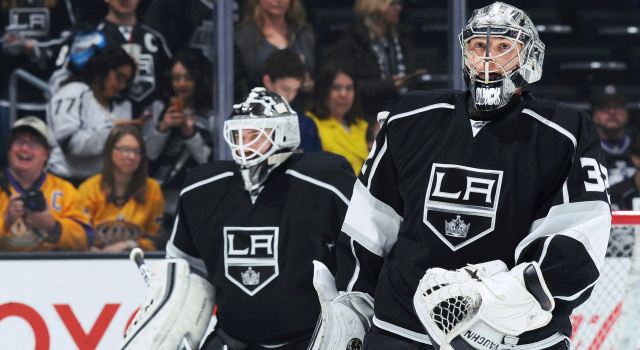 When the Los Angeles Kings were recruiting Yale University free agent goaltender Alex Lyon, they highlighted their systematic proficiency in drafting and developing goalies who were able to play at the NHL level. Whereas for the longest time the team had relied on Rogie Vachon, and Kelly Hrudey, and Felix Potvin, and very little else in the 40 years B.Q. – that’s Before Quick – the earlier part of this decade saw the team become so flush with talented goaltending prospects that they were not able to retain Jonathan Bernier, Martin Jones, and J-F Berube for longer periods of time due to salary or roster spot constraints.

Lyon ultimately signed with Philadelphia, which doesn’t present any grave concern, because the Kings still have Jonathan Quick in goal to provide the type of goaltending standard that was never consistently met through the first 40-plus years of the team’s existence.

But beyond Quick, the team’s crease cupboard is bare, and replenishing it will be one of the tasks for Dean Lombardi and the front office this off-season.

One of those incidents was the appalling case involving Patrik Bartosak, who was suspended indefinitely by the Kings following an alleged violent altercation with his girlfriend in November that resulted in 12 “domestic-related charges,” according to the New Hampshire Union-Leader. Bartosak, a well-regarded goaltending prospect who joined HC Vitkovice in the Czech Extraliga on a “hybrid”-style loan during his suspension from the Kings, is not expected at this time to receive a qualifying offer from the Kings, and would therefore become an unrestricted free agent this summer.

Because the Kings were unable to come to terms on a new contract with Martin Jones last off-season and ultimately shipped him to Boston as part of the Milan Lucic trade, and because J-F Berube did not pass through waivers prior to the start of the season and was claimed by the New York Islanders, the two goaltenders directly behind Jonathan Quick in the team’s netminding hierarchy as recently as 2014-15 are no longer part of the organization.

The only amateur goaltender currently under club control is Alec Dillon of WHL-Edmonton, who was selected by the club in the fifth round in 2014. But because Dillon underwent two hip surgeries and appeared in only seven games for the Oil Kings in 2015-16, the team is not expected to sign him to an entry-level contract. His future with the organization is in doubt.

Jhonas Enroth, who signed to a one-year, $1.25-million contract last July, confirmed correspondence with Kings hockey operations that there isn’t much of a chance at all he’ll return while speaking recently with Los Angeles-based reporter Gunnar Nordstrom of Swedish newspaper Expressen. During season-ending media availability last month, he said that “I wish I had played more games,” and now hopes to do so with another NHL organization. Translated via Google Translate, Enroth told Nordstrom that he will be moving on. Keep in mind there is some context lost in direct translations.

“I’d love to stay in the NHL a few more years, but I have no clear so far. I appreciate, however, that the Kings gave notice so early. They want a cheaper second goalkeeper, as they have other contracts to be renewed in the coming years and already struggling to cope with the salary cap.”

Because the Kings will again be pressed up against the cap, that means that Peter Budaj, the only goaltender in the organization other than Jonathan Quick to be signed for the 2016-17 season, could be a desirable option for the parent club because he carries a cap hit of only $600K. Budaj, a mid-season AHL All-Star who led his league in games played, minutes, goals-against average, save percentage, shutouts and wins, is a veteran of 297 NHL games and won his only start for Los Angeles in 2015-16, a 5-4 overtime win over the New York Rangers at Madison Square Garden on February 12. His last season as a back-up goaltender was 2013-14, when he went 10-8-3 with a 2.51 goals-against average and .909 save percentage with the Montreal Canadiens.

A team source also confirmed that Los Angeles kicked the tires on Mikko Koskinen, a former second round draft pick of the New York Islanders who has provided quality minutes as a starter for KHL-Novosibirsk and St. Petersburg, but Koskinen recently re-upped with SKA St. Petersburg in April for an additional two seasons. Last off-season, the Kings also courted Thomas Greiss before he signed with the Islanders, and subsequently signed Enroth, who posted fine numbers as a back-up in just 16 games of action.

So as the Kings look to replenish their goaltending pipeline, don’t be surprised to see the team add pieces either in the draft or through free agency or via development camp and training camp invites, because a team that has had success in recent years in developing its prospects in the crease suddenly has a dearth of available options at all levels of its pipeline.