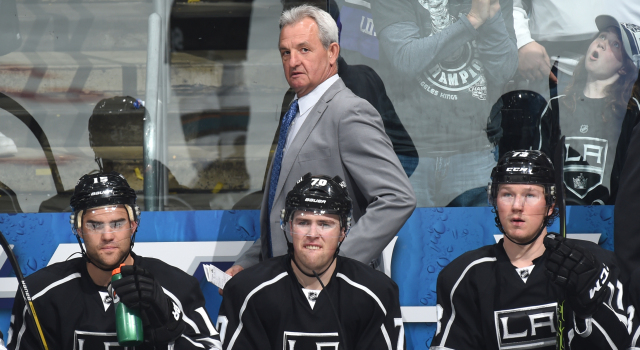 Citing the “easy decision” he made in deciding to re-up with the Los Angeles Kings, Darryl Sutter confirmed on a conference call on Friday that he wasn’t interested “in going elsewhere or any of that.”

In speaking earlier in the day with LA Kings Insider, Sutter noted that his discussions with his family were “very significant,” and that they had broached the subject after Anze Kopitar signed his extension in January. He listened hard in conversations with players and other hockey operations departments during the club’s exit meetings, which, combined with the “very significant” input he received from his family, led him to agreeing on terms of a new contract extension.

“I think as you get older you want to make sure your family has an impact on it,” he said. “I think when you’re younger, you’re sort of on-the-go. But I think that was a big factor. There’s a lot more that goes into it than that, obviously, but it’s a contributing factor. If I don’t sound excited, that’s because I don’t have to sound excited, but you know that Christopher is.”

Speaking of Christopher, he’s been among the Sutter contingent taking in Ontario Reign games, where Darryl’s other son, Brett, hasn’t played in over a week due to injury but is part of a team that is engaged in a heated second round series against the San Diego Gulls in the Calder Cup Playoffs.

Brett Sutter, who is eligible to become an unrestricted free agent on July 1, isn’t atop the list of players who should be expected to contend for a regular role on next year’s Kings team, but there are other players on the Reign – Nic Dowd, Kevin Gravel and Derek Forbort are among them – who will clearly factor into competition for roster spots that may be more open to players coming up from the American Hockey League than in several recent years.

“We have the good fortune now of the players playing in the American League playoffs that we’ve had up and down during the season that we feel are good players, and that’s how you grow,” Darryl Sutter said. “It’s easy to look back at our team and say that we’ve put in players from the organization. … Now you need in the last couple years and then this season, you need guys to make that sort of impact that [previous young players] made on our team. We need two or three of the next group to do it now. That is key for us.”

That the Kings could be apt to rely on younger, less expensive talent in certain roles – a movement also acknowledged in recent conversations with hockey operations – would signal a bit of a shift from recent years in the team’s Stanley Cup window, when potential impact rookies were often recalled in the middle of the season instead of making the club out of camp.

There shouldn’t be any significant shift in the team’s well-regarded structure, though Sutter did acknowledge the impact of speed in modern NHL play. Los Angeles again led the league in the most commonly cited possession metrics while continuing to adhere to strong checking and heavy play in all zones.

“I don’t see a big change in that because of personnel, to be quite honest,” he told LA Kings Insider. “You design your team around how you play by your personnel, but I think at the same time we’re seeing that the speed of the game is important, and there are ways from a structure standpoint that I think we can be faster, and obviously personnel-wise.”

Will there be any change in Sutter’s methods, though? He and others have indicated in conversations in seasons past that his approach has mellowed, perhaps, from his earlier days of coaching.

“The game’s changed,” he said. “I’ve coached in three or four different decades now, so you’ve had to evolve and adapt with the game. I think there are big changes in the style of play that we’ve played, even from the first Cup, when I first came here. There’s a big difference. If you look, the biggest difference is personnel. You’re looking at significant change again this summer. Just in the last three years, you’re probably going to have 10 different players. That’s a lot, and you have to be able to adjust. At the same time, your core group has pretty much remained in place, and then the young players, and there are players that are going to be here long-term, so my role in it even more is to draw out of more and to help them more.”

In regards to the off-season schedule, from now through the start of training camp, which Sutter noted will begin on September 22, he’ll continue to follow Ontario on their playoff run, which continues through this weekend and into next week. (Ontario leads San Diego two games to one.)

“Hopefully they get to play for at least one or two more series and then they have a good summer,” he said. “Hey, there’s a reason they’re not full-time NHL players yet. But certainly with a good summer, and if they’re healthy in training and know that they’re given a good opportunity, I don’t think we have to get into names, but it’s very clear that the players that went up and down this year [have been impressive during the AHL playoffs].”

From there, he’ll continue to monitor players coming out of injuries – he noted that Alec Martinez, who recently underwent shoulder surgery, should be “participating in everything” by August 1 – and assist in several facets following the NHL Draft on June 24-25.

“I think post-draft, it’s important to come back in and meet a lot of those players in a different setting – players that are coming out here for development camp for a few days, that’s important,” he said. “I think that as the years have gone along here, because of our facility, you have more players staying here now and training so they’re not all over the world. That’s important that they can actually use the facility and the coaches can be here off-and-on to facilitate any work that they need, so that’s important. And pretty soon, because of the difference of schedules this year, because of the number of the players that have world cup duties – guys like Kopi, who also have Olympic qualifier tournaments – there’s lots going on. It’s not like you set your date at when rookie camp is. There are critical dates all through the summer.”

As noted earlier and indicated by Sutter on the conference call, Associate Coach John Stevens and assistant coaches Davis Payne and Bill Ranford are expected to return as well. They’ll work alongside a familiar force who doesn’t view this new contract as a bookend on his coaching career.