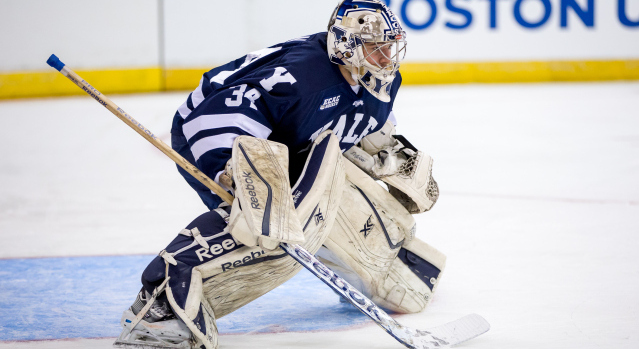 According to a Sportsnet report, the Los Angeles Kings have emerged from a group of suitors and are among the finalists to land the services of free agent goaltender Alex Lyon, who had previously been reported by the New Haven Register to be foregoing his senior season at Yale. The 23-year-old could be making a decision in the next 48 hours, according to Elliotte Friedman’s report on Sportsnet last night. The Edmonton Oilers are also among the suitors for Lyon’s services.

The Kings had put together a comprehensive package over the past two weeks as part of the culmination of their recruiting attempts. Part of the appeal of signing with Los Angeles is that the club’s goaltending depth is perilously thin, given the New York Islanders’ waiver claim on J-F Berube, Patrik Bartosak’s suspension and legal status following 12 “domestic related charges” and Alec Dillon’s two hip surgeries that have derailed his 19-year-old junior hockey season with WHL-Edmonton. Ontario Reign All-Star goaltender Peter Budaj signed a one-year extension last month to counteract some of the depth challenges the team has experienced in net this season.

Lyon is a fairly big deal. From the Yale Daily News:

Lyon made a strong case for top college netminder in the country in both his sophomore and junior seasons. Last year, he led the nation in save percentage, shutouts and goals-against average — setting new school records in all of those categories — and earned first-team honors for the Ivy League, ECAC Hockey and New England, in addition to being named a finalist for the Mike Richter Award, given to the top college goaltender.

After passing on multiple NHL offers following his sophomore season, Lyon finished his junior year ranked second in the country with a 0.936 save percentage and first with a 1.64 goals-against average. He repeated many of his sophomore year recognitions — first-team All-Ivy, first-team All-ECAC and being named a Mike Richter finalist — and added the honor of finalist for the Hobey Baker Award, which goes to the best college hockey player in the nation.

Lyon, a native of Baudette, Minnesota, is a political science major at Yale. In addition to being a Hobey Baker Top 10 finalist, he won ECAC Hockey’s Ken Dryden Award. In three seasons with the Bulldogs, he went 47-22-13 with a 1.75 goals-against average and a .932 save percentage.