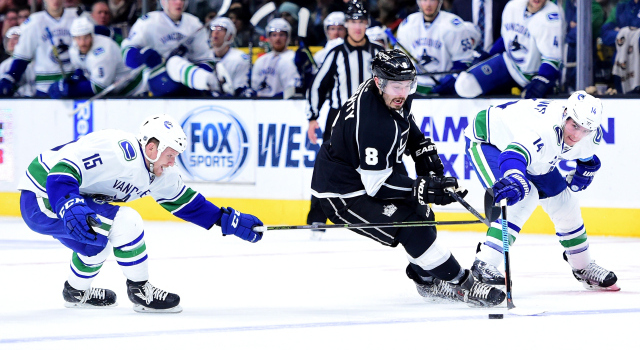 Doughty, on Jacob Markstrom:
He played well. He’s a big guy in there, and it’s obviously going to be tough to get pucks by a big guy like that. He made a lot of great saves. The pucks that went in are backdoor and a puck you couldn’t see. Those are tough saves to make for him, but both goalies played well. Our goalie played well, too. He only gave up one, obviously, and it was a good defensive hockey game by our team.

Doughty, on Darryl Sutter previously saying that he hasn’t yet reached his potential:
Yeah, I think I can agree with that. I’m only 25 years old. I turn 26 here in a few days. I have so much more to learn and so much more to experience that I know that I haven’t reached my potential. … I know that I do have a lot more in me and a lot more improving to do to become a lot better hockey player. [Reporter: Because it seems like every time they ask for more from you, whether it’s more offense, more leadership, more maturity, you’re able to deliver it.] Yeah, I don’t know what it is. I just enjoy coming to work every day and doing everything I can to help my team win. If the coaches are going to need different things from me on different nights in different years and everything, I’ve got to be all those opportunities, and when they come my way, I’m going to put my hundred percent full effort into it and try to do it to the best of my ability. [Reporter: Is somebody going to give you front teeth for you birthday?] No, I don’t think those are going to come until after Christmas. They’re going to have to be my New Year’s gift, I guess.

Doughty, on how the team fought from behind:
It sucks going down one-nothing early like that, especially on a PK goal. It was kind of a bad bounce. Usually that goal doesn’t go in on us. I thought we battled back hard. We were never going to be denied. We knew how important this game was. It was a division game for us, a team that’s just barely trailing us in the standings right now. We just never gave up, and our team has a lot of heart and we want to win hockey games. We absolutely hate losing, and that’s why we came back.

Doughty, on how Nick Shore helped set up his goal:
Shoresy made an unbelievable play. Shoresy’s an unbelievable player for us. He doesn’t get even close to enough credit. He kind of just flies under the radar. I think he’s one of the best defensive centermen in the league already, and he’s only in his second year. He did a great job. All I had to do was get the puck on net, and that’s all I was trying to do. Guys had a great screen and the puck went in.

Doughty, on whether players were hoping for three-on-three after four-on-four OT play:
No, I would rather have the four-on-three, personally. Three-on-three is a lot of fun. I would’ve liked to score on that four-on-three, but I don’t care how we win games as long as we’re winning them. It was a great goal by Kopi. That’s what we need from Kopi, too, is to come up in those big situations like he did.

Nick Shore, on whether the win brought out the team’s resilience:
Yeah, I think so, but at the same time I think there are definitely some things we can work on, especially when it comes to our start. It’s not easy coming from behind two games in a row. You’re not really putting yourself in a good spot if you have to do that every night. We’re happy with the two points, and we’re going to go from here.

Shore, on whether the game plan is reinforced when playing well but trailing:
Yeah, I think you’ve just got to stick through it. There’s just an effort from everybody. When stuff isn’t going in, you’ve just got to get more pucks to the net, more bodies to the net. Hopefully you’ll get that one, and Kopi was able to finish it in overtime for us.

Shore, on the team trying to improve its divisional record:
We’re definitely aware. It was something, like you said, that we wanted to come out. We weren’t happy with our first game against these guys at home, so it was a big game for us and it was a big two points.

Shore, on assisting on Drew Doughty’s goal:
It was a great play by Drew. Gabby was able to bump it to me, we just threw it up high, and he sort of did the rest.