Development Camp opened this morning at Toyota Sports Center in El Segundo, and as noticed through today’s mid-morning session, there has been a combination of forwards and defensemen on the ice. Though the players are touching pucks, they have been separated from the goalie group (which is currently skating, as of 11:20 a.m.)

Here’s a roster; click to enlarge (by a wee bit):

In larger fonts, those taking part are:

-You may have noticed that defensemen Kai Wissman, Dominic Tiffels and Jonas Mueller and goaltender Maximilian Franzreb come from DEL and DEL2 organizations. Keep in mind that the Eisbaren Berlin (Wissman, Mueller) and Hamburg Freezers (Franzreb) are AEG-owned teams. I’ve also been told that there are executives from DEL teams that are on hand for Development Camp this week, as well as a small handful of Germany-based reporters.

-Who is not here: virtually anyone who played for Manchester this season. It’s R&R time for the Calder Cup champs, so the only player at camp who played in any regular season game for the Monarchs is Alex Lintuniemi, who got into four games at the conclusion of the season.

-As always, rosters and schedules are subject to change. Lots more to come from El Segundo this week. 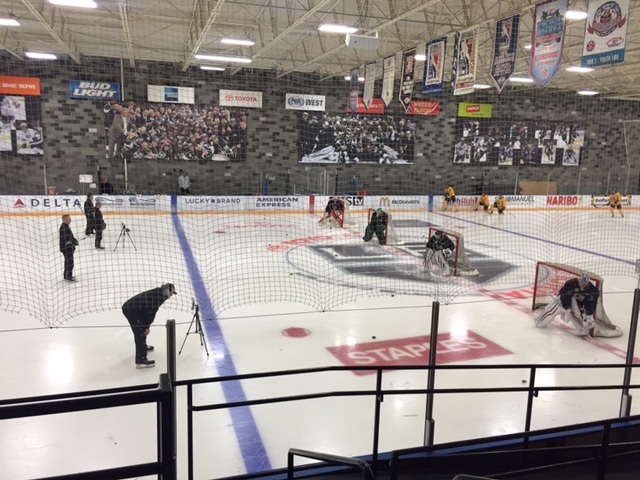