“Training wheels are off” for experienced Kings 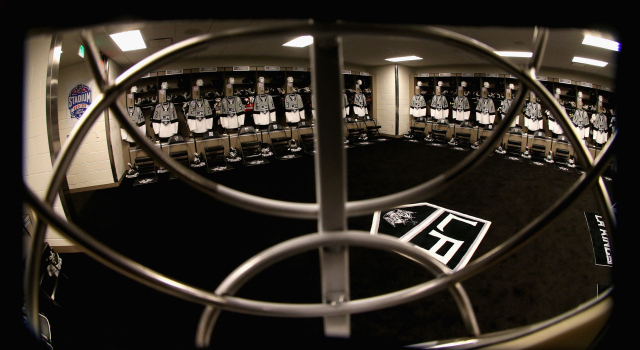 The Los Angeles Kings will potentially lose three of their four oldest players from the 2014-15 team in Justin Williams and Jarret Stoll, who are unrestricted free agents, and Robyn Regehr, who has stated his intent to retire. That would make Marian Gaborik, 33, the oldest player under contract for next season.

That’s not a bad thing. Of those currently under contract for 2015-16, 17 players have had their name etched on the Stanley Cup at least once, so it’s not as if there will all of a sudden be a dearth of leadership in the Kings’ room. The Kings also have several players in Manchester capable of stepping up to compete for a presence on next year’s Kings team.

But Darryl Sutter has repeatedly discussed his partiality towards older players like Regehr, who are, as he often says, “an extension of the coaching staff.” The Kings don’t have the necessary cap space at this point to seriously consider a swing at an accomplished, experienced free agent, but would that be something they’d consider? Is the importance of bringing in another experienced figure to mesh with this accomplished group something the team is considering?

“That’s the one thing about this group, like I said there, is people forget how young they are, but they’re not young in experience,” General Manager Dean Lombardi said. “We put these young guys out who are all 27 and younger. They’ve been to the conference finals three times. So that’s all experience is. We’re incredibly fortunate to have players, that many, 27 and under that have been through those wars. So, in a way, they are veteran. It’s just that they don’t have the mileage, which is exciting for us. And as far as the Robyns, I totally agree. We all know how important those guys were to the process. But there is also a time for – what I talked about earlier – there is enormous growth potential with Kopitar, Doughty, Quick, Carter and Muzzin and all these kids. They’ve seen how Robyn Regehr conducted himself. Now it’s your turn, and no doubt it’s time. That’s essentially where you always wanted to get, right? What I said earlier, your best players are your hardest workers and take over the room. And they have a chance to do that with two Stanley Cups under their belt. They’re still growing as human beings, and deep down we all know they’re good kids and they’re not perfect, but I’m expecting big things out of those three (Doughty, Kopitar, Quick) and a number of other ones in that room. In terms of that, I’m expecting these three to come back. They’ve never been at the top of our list in terms of conditioning, and I think that could be the first step for these guys to say, ‘Ok, it’s my turn.’ With these guys, we shouldn’t have to enforce that anymore. That’s kind of the way we look at this. The training wheels are off, it’s your show.”