How Lombardi, Kings look to rebound from off-ice issues 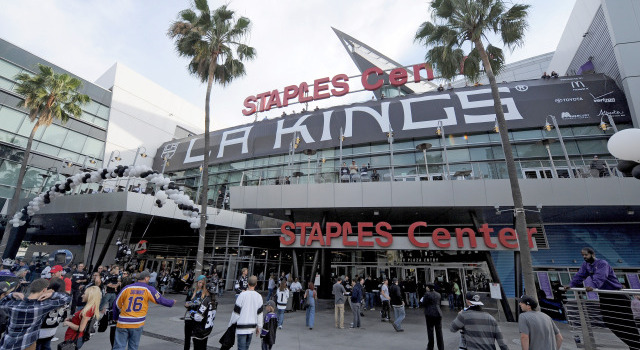 In light of Slava Voynov’s domestic violence arrest and Jarret Stoll’s drug arrest, Dean Lombardi and the Los Angeles Kings have recalibrated their off-ice efforts to attempt to ensure that the players and staff do not place themselves in any situation similar to those experienced over the last year. Though there have been references to the club holding internal investigations, such efforts were not necessarily used to determine facts or guilt as much as they were implemented to raise the organization’s standards to make sure that such events would not happen again.

“All the internal investigations had nothing to do with whether the player did this or the player did that,” he said. “It was all about what we could do, what we did wrong, why no one was thinking like Bill Walsh, that type of discussion.”

Lombardi often cites examples laid by sports legends, and in Tuesday’s call, he also referenced Nicklas Lidstrom, Steve Yzerman, Tom Brady and Kobe Bryant. The Walsh reference, as he explained below, comes from Walsh’s 1997 book, Finding the Winning Edge, which clearly struck a chord with the Kings’ general manager.

Dean Lombardi, on efforts to keep the club’s off-ice issues from happening again:
I think that both incidents generated a lot of discussion during the year. They were clearly in the first meetings and debriefings at the end of the year, the number one one topic before we even got to the hockey. The first thing we looked at was were there any signs that we should’ve been aware of for both of these incidents? If you look at yourself – managers, coaches – I think we’re very good in terms of communicating with our players. We go out of our way to try and know them personally as human beings. I think it’s one of the reasons we’ve always had that family affect around here. But, clearly, we can do more. Maybe whether it’s the coaches and managers, the personnel people, if those people could open up to us, maybe we could’ve been aware of this potentially happening. That’s the first step. The second thing, and this is what I said with the Voynov thing, I walked down to Jeff Solomon’s office and said ‘This is my fault.’ I’ll tell you a story. We neglected to educate our players. We spend time teaching them systems, nutrition, and everything else, but we missed a big step here in terms of insuring that they understand right and wrong and that this has to be reinforced, not only as a human being, but as somebody who is representative of your community. So it heightens the need for this. And what really irritated me in terms of my own failure was that if you read Bill Walsh’s book, and I think you guys know how I feel about that 49ers organization when I was coming up in San Jose. It was filled with winners and Walsh’s book was so far ahead of its time. There was a section in Walsh’s book where in 1985 or 86 where he’s talking about a need to educate your players about domestic violence. So, as the general manager of his team, this guy was 35 years ahead of his time, and I’m sitting here and we had done nothing as an organization to maybe head this off. I guess that’s just another reason why the 49ers, that organization at that time, will go down as one of the greatest ever. To see that in Walsh’s bible, it’s one of those books that you’re never done reading and you always refer back to it. I said this separates Walsh from those guys. So he was already educating his players and we did nothing. So that starts here. Just thinking along those lines, I don’t need to say that anybody in this organization is Bill Walsh by any stretch, but the point is they were proactive in recognizing this was a potential problem and educating their players. So that’s the next step. You’d like to hopefully be there when a player needs to come to you, but we’re starting and we’ve met – Mike Altieri, Jeff Solomon and myself – we’ve met with a number of domestic violence groups. Mike’s in the process of finalizing an arrangement where they’re going to come in and educate all of us on it, quite frankly. I’m interested in some of this stuff myself, and we all need to learn about it. And as far as the other thing, Chris Herren is coming in to deal with the drugs issue. I think he’s fabulous. I don’t know if you guys saw him on 30 for 30, but I saw his story on 30 for 30 and Mike and I were talking and said let’s get this guy in here. It’s a powerful, powerful story, let’s get that on the blocks. There’s a few other things we’re going to do. So this is now no different than nutrition. There will be no ifs, ands or buts. It’s part of being a pro now and I just regret that I didn’t have the foresight of Bill Walsh to head this off at the pass. You can be assured that we’ve learned from our mistakes on this. So that’s kind of the way we plan on dealing with it going forward. And, like I said, there’s a lot of discussion on how this happened, why this happened, why weren’t we aware of it and how are we going to stop it in the future? That’s kind of the end result of what we’ve come up with at this time. [Reporter: Have you had the chance to talk to Jarret Stoll in the aftermath of everything?] Yes. Yes I did. It’s safe to say, in all honesty, that was probably the most difficult meeting I’ve had in my career. … Probably one of the most gut-wrenching meetings I’ve had in my entire career and I’ve had meetings with lots of players.