Lombardi breaks down personnel decisions ahead 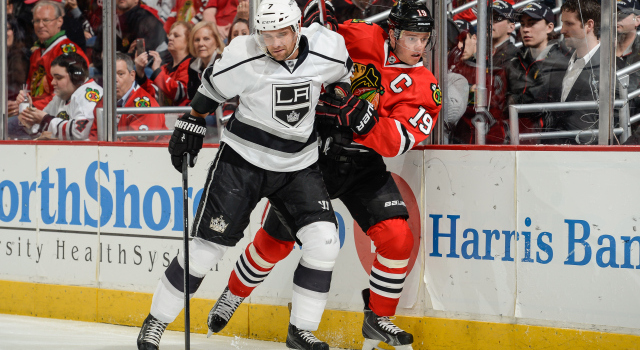 It’s getting down to the crunch time on a story that has LA Kings Insider has reported for the better part of the last year. Dean Lombardi and the Los Angeles Kings have an array of personnel decisions to make amidst a salary cap that isn’t expected to rise substantially past the $69M that had been set for 2014-15. With $64.15M allotted to 17 players ($59.98M / 16 players if Slava Voynov’s contract is removed) for the 2015-16 season, and a cap that could finish between $70 and $71 million, a front office that has worked wonders to fit its core players within the fold and win Stanley Cups in 2012 and 2014 has some of its hardest decisions to make over the coming months as Andrej Sekera, Justin Williams and Jarret Stoll are due to become unrestricted free agents and Tyler Toffoli, Martin Jones, Andy Andreoff and Nick Shore, amongst others, are eligible to become restricted free agents on July 1, the same day Anze Kopitar is eligible to negotiate a contract extension.

“I think it’s probably safe to say in terms of a team, we’ve got it down to four templates, but then each one of those templates has to be run through three cap numbers. [It will] still require some adjustments, so that’s just the way it is,” Lombardi said on a conference call with the media on Tuesday. “Like I’ve told you before, it’s probably the biggest science project as we’ve ever had. You’ve got about four templates on the board, but then each one of them is run through three different numbers, and then those three different numbers, depending on how we start moving things around has its own effect. So I think it’s safe to say that at this stage, after the season and all the work that we’ve had to put in here, at least we have a working document. It’s almost just like having a first draft, and like we know about first drafts, it’s very far from the final draft, but at least we have the boundaries we think we’ll be working with then.”

Regarding those templates and scenarios, Lombardi spoke on behalf of Mike Richards, Justin Williams, Andrej Sekera, Tyler Toffoli and Martin Jones during Tuesday’s call. His quotes are below.

Dean Lombardi, on whether any decision has been made on Mike Richards’ status:
No. I don’t think we’ve made a final determination on anything. There’ve been … a number of scenarios, a trade, a subsidy, a buyout, and all those would probably be reflected on how the other pieces fit. So there’s a number of ways to deal with that cap hit, so you can actually throw that into the mix, right? I said there’s three templates of the four, then looking at how that contract is dealt with has its own ramifications. You can figure it out for yourself the options that are before us, and the thing that’s happening now, now once the combine’s over, there’s only two teams left. At least now I think there’s more dialogue. I’ve had more dialogue the last two, three days of some substance versus anything that I had after the end of the season.

Lombardi, on whether he’s looking for any one “domino” to fall in personnel decisions:
I understand what you’re saying, but I think it’s more like just one, no matter what it is. There are like four or five things you’re looking at, and if something comes up you like – the options you look at when you’re talking to other GMs, you kind of have an idea of what you’d like, so it depends what comes around first, I’d say, versus saying, ‘well, we’ve got to do this before,’ because the other things that might come off that one are the things we can control. So I guess to answer your question, is there one that has to fall? No. I think any one of ‘em could fall, and maybe none of ‘em will fall. The only other thing I’d throw in there, though, that we’re working towards, is signing Toffoli and Jones. So that’s not a domino because that’s been a priority since you saw it during the season. We were fortunate to get Nolan done and Clifford done and Martinez and Muzzin and Pearson, so we want to finish that up, that those seven, eight players that are not even in their prime yet was to keep them in the fold. That’s a little different than the question … asked, but that’s not a ‘domino.’ That’s something we’re actively pursuing daily.

Lombardi, on whether there’s a chance the team could re-sign Justin Williams:
That would require your domino. So there’s like the four there, that’s one that, OK, it kind of fits with what you said. To make that happen, that would be your domino. That would be one of the things we’re looking at here.

Lombardi, on where negotiations with Andrej Sekera are at:
I think we have – which is not always easy to get – but I think we have the parameters of a number. Up until late last week, often times it’s hard to get even a number to see if you can plug it in. So I think we’d have to arrange that it would take. Now, have we been countered with an offer yet? No. That’s all I can say on that one now. I would say that I don’t think his number’s outrageous. He’d like to stay here, and so by virtue of that, he ends up in some of your schematics.