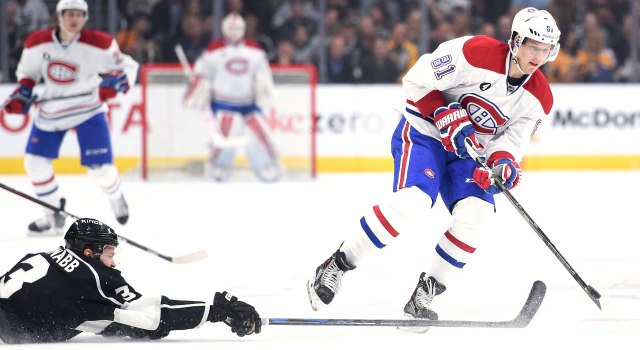 On the relief in the win:
You don’t get any relief in a hockey game. [Reporter: But how you won, coach.] Well, we should’ve been up three or four-nothing and didn’t put it away when we had glorious opportunities to do it in the second period.

On winning in a shootout:
You know, Gabby was hot, so it was good to see him go in and [score]. I asked Billy after the second period who we should use, and the coaches all agreed those would be the three guys, and then Kopi, so we were right on two of the three.

On the special teams:
Well, we had to pull the goalie to tie it up, so obviously it was big, and Gabby’s in front of the goal. Muzzin makes a hard pass to McNabb, McNabb shoots it at the net and Gaborik tips it in.

On whether all remaining games are “must-wins”:
There’s no ‘must’ anywhere. You don’t have to do anything. Just try and win. There’s no such thing as a ‘must-win.’ Nobody gets locked up or thrown in the ocean or anything. I’m not into that. It’s just a game.

On how much he looks at the standings:
Anybody who doesn’t – first of all, if you’re a Canadian, everybody’s looking at the standings. I’m a Canadian, so I’m looking at ‘em. [Reporter: But do you look at ‘em now more than you did before, just knowing the importance of the stretch?] We haven’t focused on that part of it. We focused on tonight. I knew it was going to be a really, really tough game just because of the way our schedule was coming back to it. It’s kind of what you do. You don’t look back, don’t look ahead.

On whether it’s disappointing that a Montreal team in a three-in-four got back in the game:
No, it’s not disappointing. I mean, playing Anaheim and Los Angeles back-to-back, it’s not that tough a trip. It’s not a tough turnaround. It takes you farther to get to the airport in Colorado when you play a game than it does to go from Anaheim to [Los Angeles]. So there’s no tough turnaround on the back-to-back out here. That’s irrelevant.

On whether he was impressed by the team’s first period:
We’re trying to have a good start every night. Try not to give up too many shots, give yourself a chance to win if everybody was willing to check.