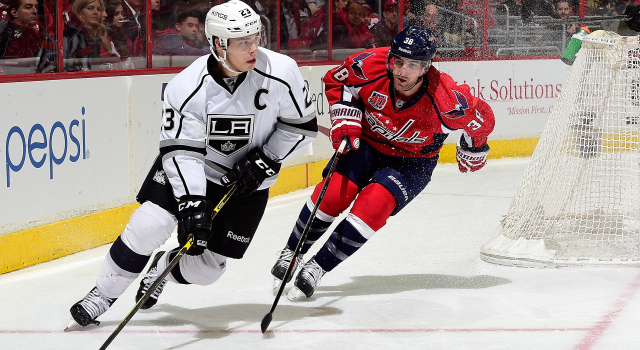 Dustin Brown, on the loss:
It’s not good. It starts with our emotion. I answered that question similarly today. We’re a good team, but it’s hard to win when you don’t play with enough emotion. That’s on an individual level and a collective level. We need everyone to be invested in the game emotionally, and from there we can work on X’s and O’s and all of that, but you need the emotion first.

Brown, on when he noticed the team began to lack emotion:
It’s kind of one of those things, you don’t really know when it creeps in. But when it does, you need to identify it and get it out of the room.

Brown, on whether fatigue is leading to the lack of emotion:
I think those are just excuses. I think it’s just a matter of getting yourself ready to go. I think it’s an individual’s responsibility to get himself going. If he’s ready to play every night, then it’s helping our team. If he’s not ready, or it’s one of those things where everyone has off nights – but the emotion can always be there and the work can always be there.

Brown, on the team currently being out of a playoff spot:
You can look at it one way, and it’s we’re out. The other way to look at it is we need to get better. There is plenty of time to do what we need to do. Right now, it’s in our hands. We still have time to control our destiny. We can’t let it drag on to the point where you have to rely on other teams winning and losing games.

Brown, on whether the sense of belief is waning in the room:
I think confidence comes and goes. It’s more importantly your belief system, and I think that still we all, in here, believe we’re capable of doing what we want to do. But again, it starts with the emotion. I mean, you can throw everything out the window if don’t have the emotion.

Brown, on whether early deficits are wearing on the team:
It doesn’t make it easy to come from behind. I don’t know what the stats are, but we’ve been behind a lot. I think that is something that, again, if you knew what you needed to do, everyone would have a good start. But you have to have a good start.

Brown, on whether he is going to call a team meeting:
I mean we’ve been talking about it for a month now, so if guys don’t know what’s going on, then they haven’t been listening. We’ve had plenty of meetings. We’ve talked about it. At a certain point, you’ve got to stop talking.