Importance of long homestand not lost on Kings 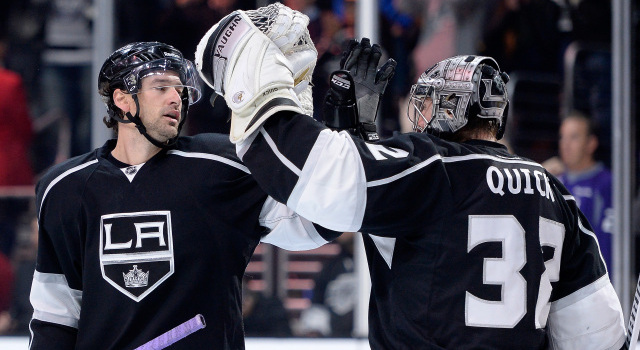 The Kings open up a seven-game homestand against the Nashville Predators this afternoon at Staples Center. After today, Los Angeles won’t play again until Thursday, when the New York Rangers come to town for a 2014 Stanley Cup Final rematch. From there, Winnipeg, Toronto, New Jersey, Anaheim and Calgary visit Staples Center before the Kings close out the pre-All Star Break slate by visiting San Jose on January 21.

Los Angeles is 14-4-2 at home, good for 30 points, the third-most home points through 20 games in franchise history. With the smell of some home cooking wafting through the team’s dressing room at Staples Center, the players are getting hungry.

“It’s now time to reel in a few (wins) in a row here,” Justin Williams said after Tuesday’s practice, as reported by the Orange County Register’s Rich Hammond. “It’s time to stop screwing around. It’s time to get ourselves to the top of the conference again, where we belong, and get some breathing room between us and other teams.”

Yesterday, I consulted with Drew Doughty about the importance of this upcoming schedule.

Drew Doughty, on the importance of the upcoming home schedule:
Yeah, you want to win as many games as you can at home. We’ve got to be tough to play against when people come into this arena. That’s a big stretch for us. When you get these long spans at home, you’ve got to make the best of it. We obviously want to win all seven and take it one game at a time, but it’s going to be tough to do. We’re comfortable here. We’ve been playing well at home, so we’re happy.

Doughty, on whether it’s challenging to battle complacency on a long home stand:
No, I don’t think so. I think we’re happy to be home. When you’re on the road, you just can’t wait to get back home, can’t wait to be in your own bed. Last night, getting back, I just couldn’t wait to lay in my bed. It’s just fun being at home. You get off practice at whatever time during the day and you get to go home and just hang out. Hang out with your roommate, hang out with your wife, whatever it may be. It’s fun being at home and we’re going to have a little bit of time off in between games here so we’ll be able to do some things for fun with the teammates. It’s great playing at home. I don’t think there is any reason to think we’d play worse because of it.

Doughty, on playing an afternoon game two days after ending a road trip:
It’ll be a challenge for sure, but it’s nothing we can’t handle. We got in late, didn’t get the best sleep obviously. But we’ve got lots of time to rehydrate today and get some rest, get a good sleep tonight and be ready for the game [Saturday].