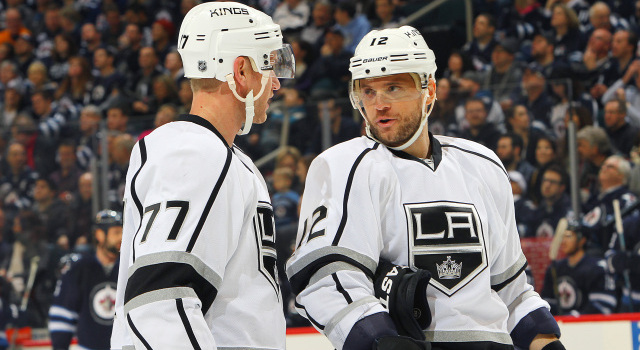 Jeff Carter and Marian Gaborik have shown improvement in their recovery from illnesses, and both should be in the lineup tonight when the Kings face the Edmonton Oilers at Rexall Place.

“Jeff played with balls and gutted it out…he was sick all night, gave us what he got,” Darryl Sutter said.

Carter downplayed any extraordinary efforts on his behalf and said he feels “better” today.

Gaborik, who will carry a six-game point streak into tonight’s tilt, appears to have been dealing with a stomach ailment. He admitted to having battled a fever and throwing up, and when speaking with the media at the team hotel was clutching a water bottle and a bottle of Gatorade.

Have liquids replaced chicken and pasta as part of a player’s game day meal?

“Last night quite a bit – all I could get down,” he said.

Gaborik skated at Rexall Place earlier today “to get a little sweat and get moving a little bit” in advance of tonight’s game. He said he planned to take “short shifts and try to stay fresh.”

Darryl Sutter closed the door on the thought that the ill winger would have to miss another game.

“Well, obviously Gaborik couldn’t play yesterday,” he said. “That was his decision, so I’ll make the decision today.”