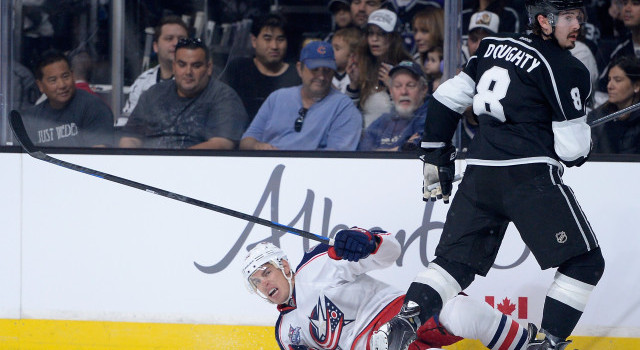 On the severity of Anze Kopitar’s injury:
He’s all right.

On whether Kopitar will travel with the team on the road trip:
He’s all right.

On whether he visited the Columbus dressing room to check on Nick Foligno:
I did. [Reporter: When you see something like that happen, what are your reactions?] I don’t like to see anybody get hurt. After the game was over, I wanted to see how he is. That would be a good reaction, wouldn’t it? [Reporter: From every indication they’ve said that they think he’s going to be OK.] Yep. Sore neck.

On the team’s performance:
Tonight wasn’t our best game of the homestand.

On whether he has had a line that has been as productive as the Pearson-Carter-Toffoli line:
In L.A.? [Reporter: Yeah, here.] You’ve been to as many games as I have, so do you think there’s been one?

On Tanner Pearson going to the “blue paint”:
I thought Tyler and Jeff were dominant players tonight. I thought Carter was the best player on the ice, and Tanner managed to chip a couple in.

On why the line has been so successful:
I think they’re bearing down on their opportunities. The goals that they scored on tonight were probably the opportunities they had, which means in this league if you finish your opportunities, hopefully as a team we can follow their lead a little bit.

On the 6-0-0 home stand:
It’s important to get points tonight because we’re going on a tough trip, and I give our team credit for playing shorthanded basically the whole six games.