Jeff Carter, a model of consistency 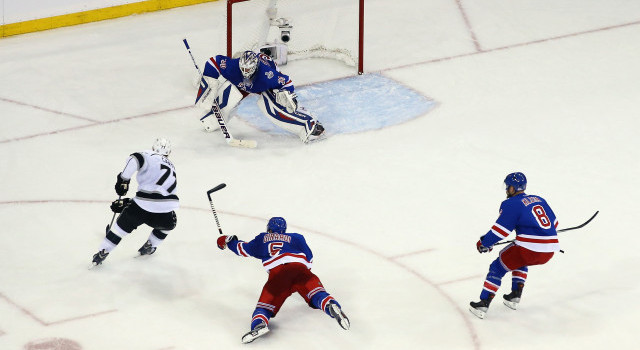 There wasn’t a surplus of news coming out of the Kings’ facility in El Segundo on Thursday. Having beaten most of the series’ media contingent back to Southern California by roughly nine hours, a handful of players and scratches took the ice at the same time Darryl Sutter greeted the media as part of a brief press conference at a nearby hotel.

And then there was something that was certainly not news – no, it wasn’t Jarret Stoll’s admission that he ate Chilean sea bass on the flight west last night, which arrived at “right on the button” at 3:00 a.m., as Sutter noted – but the acknowledgement that the Pearson-Carter-Toffoli line was very, very good. Again.

“I think we were skating well, doing what we’ve been doing all playoffs long,” Tyler Toffoli said.

And while Tanner Pearson is worthy of recognition for his eight-shot performance in which he didn’t miss the net or have any shots blocked, it’s still Jeff Carter driving the limo. As good as Pearson was in Game 4, and boy, was he excellent, it’s Carter’s consistency that sets a terrific, unspoken example for the two rookies with whom he plays.

“He just plays hard,” Mike Richards said. “He’s a good player. He’s a big, strong guy. He skates well, so that’s his biggest asset. Sometimes your hands aren’t there or sometimes you feel tired, but when you have a long stride and you’re a good skater, you can cover that up.”

Of course, becoming a model of consistency starts with a healthy, easy-to-replicate approach to the game.

“I think he’s a well-trained athlete, which allows him to do that,” Darryl Sutter said. “I think he’s a guy that has a really tight focus on game days. He understands the kind of player he is. Pretty much has thrived on that here, for sure.”

When a team leads the Stanley Cup Final three games to none, it’s natural and expected for discussions to gravitate towards an impending Conn Smythe Trophy presentation. Those discussions have been mostly muted since New York won Game 4, but it’s still worth dissecting the merits so valuable to Los Angeles’ postseason advancement.

Carter ranks second on the Kings with 10 goals and is tied for second with Justin Williams with 24 points. The 14 of 16 attempted shots that his line put on net on Wednesday night reflects a trend that has remained constant through the postseason. He is clearly directing the run of play towards the attacking net on a team that has such a strong proclivity to do so. He has been a positive player in five-on-five Corsi in each of his last six games and ranks third on the team – behind only Pearson and Toffoli, who have drawn slightly easier assignments – in five-on-five Corsi-for percentage.

Of course, Carter’s 200-foot commitment and penalty killing responsibilities form a core part of his skill set, as they do for all Los Angeles forwards.

He’s not a favorite for the Conn Smythe Trophy should the Kings win the Stanley Cup, but his consistency has shifted any potential burden off those around him.

“I mean, he’s a great player,” Toffoli said. “He’s been great with me and Pears in just keeping it simple. I think that’s what we’ve been trying to do as a group, just play simple, get pucks deep and play our game.”

Tyler Toffoli, on losing a potential Stanley Cup-clinching game:
It’s tough losing any game. Losing last night, it hurts, but you’ve got to refocus and be ready to play tomorrow.

Toffoli, on the opportunity to win on home ice:
I don’t care where it is or how many games it takes. I just want to win. We’re going to start focusing – I mean, we started focusing right after last night, thinking about tomorrow and what we have to do to win.

Toffoli, on whether the crowd takes less significance the deeper a team advances:
I mean, you obviously want to hear the crowd in the back of your head, but you have to be focused and be ready to do whatever it takes to win the game. It doesn’t matter how loud the fans are in the end. It matters how well you play and how good the team plays.

Toffoli, on the offensive performance in Game 4:
I think we’ve got to get to the net a little more and screen Lundqvist. He made some saves, but at the end of the we let him see a lot of the shots, and we’ve got to get there.

Toffoli, on moving past unfortunate bounces:
It’s the playoffs. I think all playoffs long we’ve had bounces, and other teams have had bounces. In the Final now, obviously it can only go two ways, so we’ve got to make our own luck and just keep shooting the puck and keep getting there and playing well in our own zone and being fast.

Toffoli, on the Rangers generating “hope” after winning Game 4:
I mean, obviously they have hope. When they win a game, it’s like when we win a game. You have a little extra momentum or push or whatever you want to call it. We’ve got to come out, play hard the first 10 minutes of tomorrow night and just send the message that we want to win and we’re going to win.