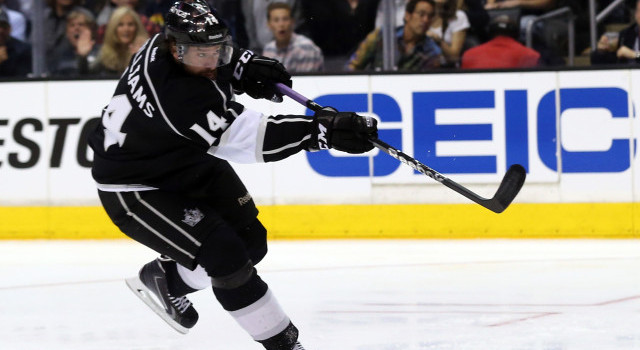 “Everything usually offensively starts in our zone. Richards made a great play getting the puck out. We screwed up a three-on-two royally. Fortunately for us, one of their ‘D’ men was following, I was sitting in front of the net with the puck, I was able to make a shot.”

On whether the team recognized the deficit against Chicago when down 2-0 to New York:
Well, it certainly helps that we’ve done it time and time again. I mean, it’s a great result of the hockey game for us, definitely. But we have a lot of things to clean up. Certainly not our best game by any standards, especially ours. But we were able to get it done. That’s the most important thing.

On recovering from a slow start:
I mean, we certainly don’t want to make a habit out of this. That is a world class team up there with world class offense. There could have been a lot of storylines tonight. They had a breakaway in the end of the third period that Quick made a great save on, we wouldn’t be sitting here right now. A lot of things going awry during the game. We certainly have to clean that up. We certainly weren’t ready for the speed of their wingers, I don’t think.

On the impact of Kyle Clifford’s goal:
Huge. Cliffy played a terrific game for us. We get out of that period still down two goals, it certainly could have gone either way. That’s playoffs. There’s little things here or there, second efforts that result in goals that we’re able to come back from deficits. Making that 2-1 gives us a little bit of a step towards getting it all the way back.

On what was said to spur the team’s third period resurgence:
I think as the game progressed, we gradually got better. Again, far too many odd-man opportunities. Quick didn’t have many saves in the third period, but he had some grade A ones. Nothing needs to be said between periods. You’re in the Stanley Cup Final. You’re going to get up for anything, have a lot of emotions. We’re able to channel them and put them out in a positive manner and ultimately get a win.