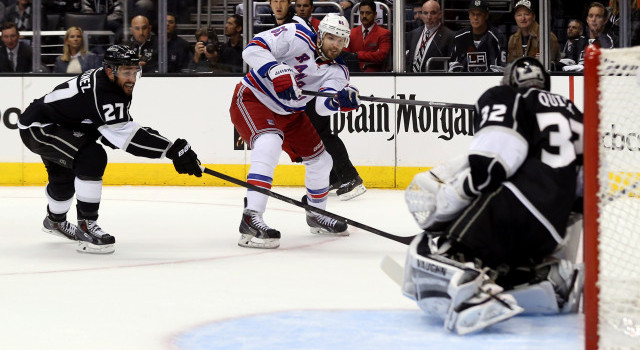 On winning a game they trailed two-nothing:
We’ve done that a few times, obviously. I think it’s not something you want to make a habit of.

On whether deficits raise the team’s focus:
No, same as you’re up two, down two. You don’t change the way you’re approaching it.

On Carl Hagelin’s breakaway at the end of regulation:
He created one earlier in the game. He’s got a lot of speed, so he creates a turnover and comes in and tried to go high glove. You’re lucky you get a piece of it.

On the challenge to stay focused in the 12 minute stretch without facing a shot:
It’s part of the game. You’ve had that happen before, so you know how to approach it.

On the team’s “magic” and finding a way to get a win:
Obviously we get a bounce that goes against us a little bit there on the second one. It’s still early, so you just stick with it. From a goalie’s perspective, you try and make the next save. With the forwards, they’re just trying to get in deep, wear ‘em out a little bit and get pucks to the net. We were fortunate to get the third there. Now, you start all over again. It’s a zero-zero game and you’re trying to win the next game.

On the routine of playing every other day or every two days in the playoffs:
You expect that this time of year. It’s something we’ve done in the past. You have your routine. You stick with it. It’s worked for you in the past, and you just hope it works for you as you go forward.