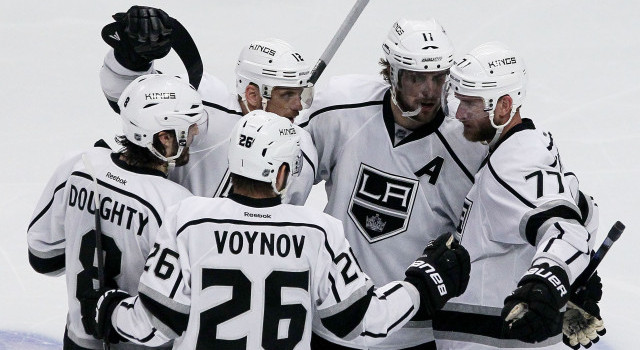 Anze Kopitar, on Drew Dougthy:
I’ve been saying this a couple years now, he’s our Nick Lidstrom. We all know what he did in Detroit for many, many years. I think Drew likes the big stage, obviously. He likes these types of games. He gets very emotional. I guess if you draw a line underneath that, he just brings his game to the next level at this time of year and these type of games.

Kopitar, on what he liked about the power play:
We simplified it a little bit. Even the first couple power plays in the first period, we were teeing up Slava and Drew quite a bit. I got a couple of shots off. We were just trying to get pucks through and create some traffic and make it hard on Crawford.

Kopitar, on whether this win is a momentum swing heading to Los Angeles:
No, we’ve got two days to sit on it again. We’d like to play every other day, but that’s the way it is. We’ve got to build on it. I’ve said before, I think we can still play better hockey. In order to get four wins against this team we’re going to have to play better.

Kopitar, on whether Quick’s save on Seabrook gave the team momentum:
Yeah, for sure. We’ve talked about it, he’s giving us the opportunity to either win the game or stay in the game – just like you said with that save – pretty much every night. It’s all we can ask from him.

Drew Doughty, on if the coaches said anything to players after the second period:
I’m trying to think, second period. I don’t think he said too much, just because when Darryl doesn’t come in and say too much, that means he’s mad at us. That tells us we’re not playing well and we need to do something about it. If he’s just staring at us in the room and making little comments like ‘Oh, Toews is the best player in the world’ or things like that, then we know he’s not happy and we need to do something about it.

Doughty, on how they exposed Chicago’s penalty kill:
We just tried to keep it simple. We tried to get pucks to the net. I think we were trying too much down low, trying too much through the seams. We just need to get the puck through the D and get the shots through and have screens. That’s how we’re going to beat Crawford because he’s a good goalie.