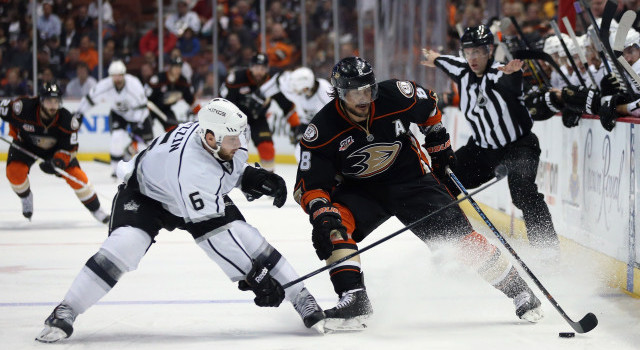 On “working through” consistency issues:
I don’t think we’re really “working through” it. We’re trying to maximize what we’ve got in the lineup. [Reporter: You felt that you guys have had a consistent performance?] Maybe we’ve played as good as we can. [Reporter: Have you?] Maybe we have. [Reporter: In which case?] We’ve played well enough to win two and to stay in other ones, and we’re trying to find out if we still can. [Reporter: How in the end would you all assess that you’ve played as well as you can? How do you know that there’s not more there that you can get out of them?] Well, we think there is. Sometimes it’s just not about X’s and O’s. Sometimes it’s about maybe as a team we’ve played as we can, when you do it all from a format standpoint. But maybe there are guys who can play better.

On the encouragement from the third period of Game 5:
You know what? The last two games, they scored the two quick goals in Game 4 – two goals in what, a minute? And they scored two goals last night in like two minutes, which means that even though they’re power play goals, both of them, it’s not the same group on the ice. I think the goal last night after the power play, when you talk about the consistency, well, you’ve got some guys who are having to play different situations and extra minutes now, and if they weren’t playing, they’d be bitching and moaning because they weren’t. So when they do, there’s the old rule about skate, pass, shoot – those things. But just execute, just do that. Just maximize your skill set. That’s it.

On the decision to leave Jonathan Quick in Game 5 after he had been removed after allowing two goals in Game 4:
It’s more of after period. I don’t like really doing it while it’s going on because I think the guy on the bench might not be ready, and we know how important both guys are. It doesn’t matter that it’s a series. I just think (with) that position, it’s just better if you let them know. Like, with the game that we took Jonathan out, I told Marty right away, and I told Jonathan right away. I think that’s how I feel, the respect that I have for them to do that.

On any comfort taken from the players having fought from behind before:
Yeah, you know what? I think I’ve been through it more than any of them. At the end of the day, there’s probably not many coaches that have been in as many games. So that’s something that I’m comfortable with. [Reporter: It’s not a comfortable thing, though, for anybody, right?] I’d rather be playing a Game 6 in May than playing Game 82 on the 15th of April, saying, ‘Ooh, I can’t wait to watch the playoffs.’ Hey, it’s the way it works. Teams are close. As a coach, you go in expecting to win every game. If you don’t, you shouldn’t be in this league. We’ve been down that road- [Reporter: A few times.] Right. So you go in expecting to win every game. Obviously that doesn’t happen, otherwise somebody would go 82-0 and somebody would go 16-0. But if you have that mindset, that’s a good one to have.

On Anaheim’s strong play, not necessarily “what the Kings are doing wrong”:
Yeah, I don’t think we say that. It’s two good hockey clubs. Basically, other than the empty netter, they’re all one-goal games, so you know what? Maybe we’ll get the one more tomorrow night.

On how to get back to better puck management and playing “Kings Hockey”:
I think that’s individual stuff. Normally if you don’t play that way, then you get to watch up where it’s cold. But we’re not in that position right now. You’ve got to play.

On any luck over Anaheim’s ability to capitalize on a high degree of opportunities:
First off, they scored 266 goals this year, so obviously they do have that ability to finish opportunities. So that’s that. If you’re just doing it on last night, I mean, all four lines scored a goal if you look at it, even though one’s a power play goal. All four lines for them scored. So that’s capitalizing on opportunities. Were there many? There weren’t many. We’ve seen that through this series in three of the games where there was a big discrepancy in the shooting. We felt we had as many opportunities as they did, but you’ve got to finish it off, too.