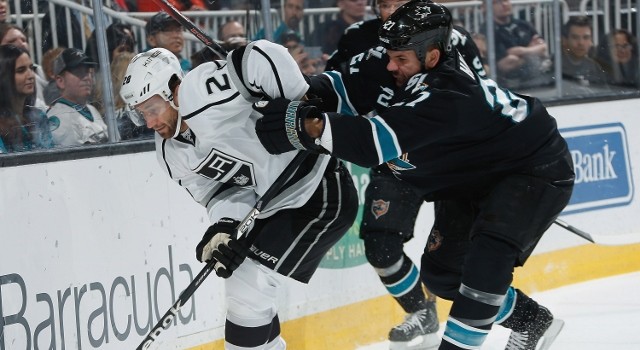 It’s a poor choice of words to say that the Kings and Sharks will “renew their acquaintances,” because judging from the on-ice action, these are two teams that aren’t exactly chummy. An already built in Southern California-Northern California rivalry has been heightened by two playoff series between the hockey clubs over three seasons.

More accurately, the Kings and Sharks will renew their distaste for each other. This is a real, modern NHL rivalry, borne out of postseason familiarity. This is not a rivalry based on fan proximity.

It is also a rivalry in which each team struggles to win in the other team’s building. Since these teams met in the 2011 postseason – when Los Angeles went 2-1 in San Jose and 0-3 at Staples Center. The Sharks won a road game when Ryane Clowe infamously played the puck from his bench in the 81st game of the 2011-12 regular season, and Jonathan Quick benefited from a late second period Anze Kopitar highlight reel goal in posting a 1-0 shutout in the Bay Area two days after the Dodger Stadium game. Other than those games, there has been a lot of home cooking since the 2011 series.

Though overtimes and shootouts have frequently been involved, the road team has lost 20 of the last 22 games in the series. It’s a trend Dustin Brown and the Kings will attempt to reverse.

“I think the most obvious difference is we’re going to have to find a way to win a game in their building this year, which we didn’t have to do last year,” the Kings’ captain said. “We managed to do that this year, once in the regular season. They’ve got a high-powered offense, and probably one of the more important things for us going into the series is limiting our penalty penalties and our PK.”

Recently, games in San Jose have been closer than the games in Los Angeles. Dating back to November 28, 2011 and including the 2013 playoff series, the Kings have played 10 straight one-goal games at the SAP Center. Only five of 11 games played at Staples Center over that time span have been decided by one goal.

As narrow as the 10 road games have been, the Sharks have won nine of them.

“Their building is a really tough building to play in, and I think they thrive off the energy,” Brown said. “I think it’s one of the more fun buildings, quite honestly, to play in, just because of how the crowd and the atmosphere of the building is. But they definitely use that to their advantage. I don’t want to say there’s a difference in their game on the road, but they come out really hard in their home building.”

Dustin Brown, on whether he has begun to think about the upcoming playoff series:
Just knowing who we’re going to play. I mean, it’s in the back of your head, but again, it’s about shoring up the details, like I said. We’ve played San Jose. We know them well enough of what series will be like. So it’s just getting ourselves ready for it.

Brown, on whether it’s challenging playing with a playoff series already set:
It can be…One, it’s clinching a playoff spot, but also knowing we can’t move up or down. I think that’s another unique aspect of it. A lot of teams, even up until last night, San Jose and Anaheim still had something to play for, and we’re kind of in limbo where we literally can not move a spot up or down. But we have to use these last two games to shore up the details.

Brown, on whether the approach ever changes in these late-season games:
I mean, your approach to the game, getting ready for the game doesn’t change. It’s just the urgency and the intensity within the games. Like last night, for an example, it took us unfortunately to be down three-nothing before we really started to play, and once we started playing, we were fine.