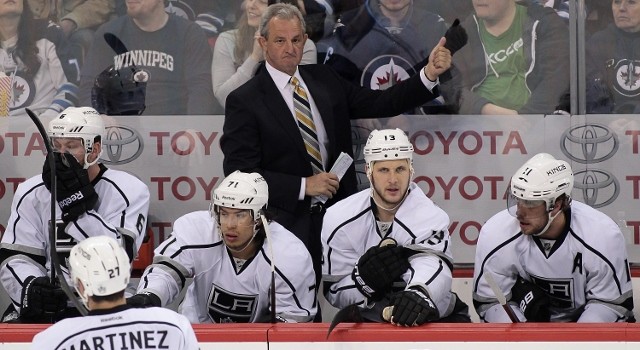 On whether the added Eastern Conference element to the schedule was “tough”:
Tough. For sure. If there was one advantage in it for us coming west, is I think [this trip] is either the third or fourth one where we’ve sort of gotten localized a little bit. We had the New York one, and this one, and I guess the Tampa-Florida. So we kind of got that. Hey, the schedule’s, tough. That’s the bottom line. This year, in an Olympic year, everybody’s going to say that at some point. I didn’t look at it as our road schedule this year. I actually liked our road schedule, the way it set up. I didn’t like how our home schedule set up, because too often, as is this one, and most teams you’ll see when they travel back, they have two days between [games]. We didn’t get one of those. We fly, and basically by the time you’re home, you’re actually playing in 24 hours. That’s been the toughest part for our team.

On whether he analyzes the remaining schedule or takes it game-by-game:
Well, obviously being done in conference, and then knowing what we have in division, the last 10 days are sort of funny because we go play Phoenix at home, and then play the next night in San Jose, and then we go to Vancouver, and then we come all the way back. We have, what is it, three days? And then we go up to Edmonton and Calgary. So it’s sort of disjointed, the way it is. But it’s all in our conference, as I said, and other than I think those two games, it’s [in the Pacific] time zone.

On not being as desperate this late in the season compared to the previous two years:
Well, I think there has to be a sense of desperation and urgency, for sure, unless you’re a team that’s a home seed already. I think there’s still going to be a lot of moving around. For a team like ours, we want to stay where we are. [Reporter: How do you feel about desperation for a team? Do teams do best when they have real desperation, or can they manufacture it?] You know what? You can see it during games. It’s like talking to our team last night after the first period. It’s just a composure thing. When you’re a confident team and you’re a good team, it’s impossible to always have the lead. You know, all those things that happen during a game, you know what? There’s things you have zero control of. But trying to play with composure, meaning make the good play under pressure and know you’re going to get hit and all those things, and then when you do that, then everything takes care of itself. You don’t evaluate, then, on wins and losses. You just evaluate it on how you’re handling [it]. You know, it’s what good teams to, and teams that have to learn how to do it or players that have to learn how to do it…there’s a huge part of it. It’s the preparation. You see with young players. You see it when they’re not as efficient as they should be consistently, well most of that is the preparation part of their game. It’s not the performance. It’s preparation. Once they get that figured out, then they can be consistent in their performance and it makes it easier for them. They can manage it themselves better than having the constant- hey, the best voice is the inner voice, for sure. [Reporter: How does that play into something like undisciplined penalties? If that’s considered a ‘composure’ thing.] Yeah, it is. We talk about our team as not taking offensive zone penalties, because the way the officiating is now, we have some undisciplined officiating. So, quite honest, you can’t let that be a distraction to our team. We’ve seen it the last two games where, quite honest, we’ve had goals that were supposed to be goals that weren’t. Where I’d rather dwell on it is we took two offensive zone penalties last night, and we shouldn’t take those, and if you’re spending too much time in your own zone, then you’re taking three or four of those. The game is not as hard to figure out as everybody thinks. The less time you’re in your zone, the better chance you have of not getting scored on, and if you don’t take penalties in the offensive zone, and you have the puck in the offensive zone, you have a chance at winning hockey games.

On the officials not awarding Mike Richards a goal in last night’s empty net situation:
They will say it all evens out. I’ve heard it. Once the league has their meetings in Florida in March, even though the rules don’t change, for a while the rules do change. And that’s unfortunate, and we see it. And I’ve seen it for a long time, and I know the answer always is ‘Oh, it’ll all even out.’ Well, that’s not true. I mean, it’s tough for the referees, too, because they’re in a high-pressure environment right now too, because they want to play after April 12th, too. That’s a fact…I mean, there are 16 teams that get to play, and there are a certain amount of the officials that get to play. So I’m sure that they feel a lot of pressure, too.

On Pittsburgh having faced three straight back-up goalies:
I’m not sure that any of the goalies that you’re talking about are considering ‘back-up goalies.’ On a lot of teams, they’d be the number one goalie. What you’re talking about is that they’re playing behind stars. That’s a way better way of looking at it. When you’re playing behind a star, you’re playing behind a star. You’re not really a back-up goalie. [Reporter: Well, the Penguins are playing against guys who are playing behind stars.] That really doesn’t matter. We don’t look at it like that. We look at it like our star player hasn’t played many games this year, and we’re trying to get him up to that. A horse has to run every 10 days. [Reporter: Is that why you went with Quick in the back-to-back?] We were talking to him, and he hasn’t played many back-to-backs, and when you look at the schedule, it was three-in-four, but we had the day when we traveled after the afternoon game. When you look at his work ratio, the way it worked out, we just agreed on it. When you talk to him and you see how he feels. [Reporter: Jonathan always seems to want to play on the second half of the back-to-back, doesn’t he?] All great players want to play every game, Jon. [Reporter: Has he ever told you ‘No, I’m tired,’ or ‘No, give so-and-so a start,’ or anything like that?] No, I mean, we know him good enough that…he’ll tell us when he’s tired enough.