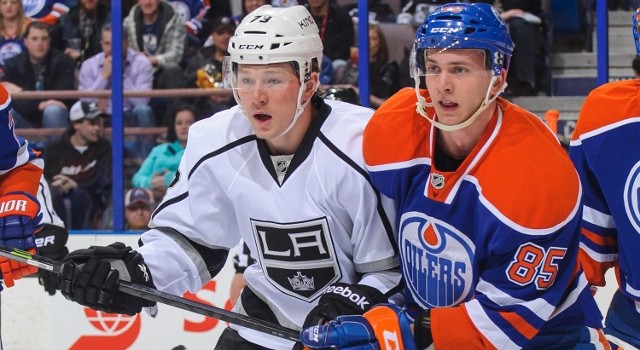 On when he knows he’ll be killing a penalty:
During the game, whenever he pats you on the back, that’s when you know you’re going. You just have to be ready to play in every situation. Start a game, finish a game, you have to be play and be responsible when he puts you out there so you can get the opportunity again.

On working on the penalty kill in practice and meetings:
Yeah, I’ve had a couple PK meetings, but obviously you guys know that I don’t kill all the time. But when some guys who kill get a penalty then sometimes I go, sometimes I get the last 20 seconds of it. So you just have to be ready to go out there and make sure you’re responsible and strong on your stick and make sure you get pucks out.

On having the confidence of the coaching staff to be on the penalty kill:
Me and Tanner killed last year and I think we’re smart enough guys to know what we’re supposed to do and the position that we’re supposed to be in. So we have to make sure that we don’t get caught cheating or taking a little short cut. You have to make sure you’re in the right spot at all times. Like I said, you can be out there in other situations during the game.

On his power play goal against Anaheim:
It feels good every time you score. So, hopefully I can string a couple games here and get some goals and our team can get some momentum, score a couple goals and win some games.

On playing on the right side versus the left side:
Offensively, I think it’s the exact same. I think the only thing that’s really different is breaking out into the neutral zone.

On this morning’s earthquake:
I felt it, yeah. I was here two summers ago and I think I felt one. That was bigger, too. [Reporter: Was it the night one at like 11:00 p.m., or something?] I can’t remember. They both woke me up, but it was weird. I thought somebody was actually breaking into my house.