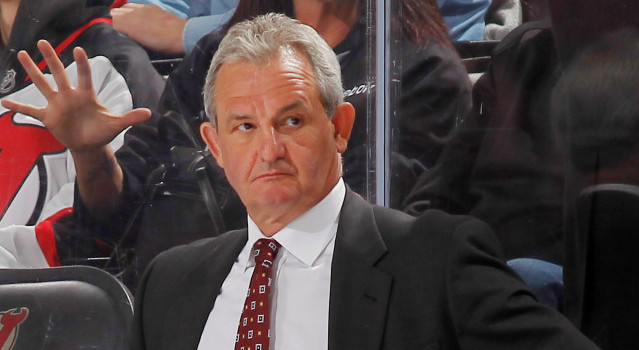 On whether Tyler Toffoli’s added penalty killing role is based on merit:
Correct. Generally that would be the case in the National Hockey League. Earned based on performance. [Reporter: How would you gauge it – not just the offense he’s able to provide, but the 200-foot game?] Well, he’s struggled, obviously, scoring. It was good to see him score the other night. He hadn’t scored since, what was it, around Christmas. So we pulled a lot of those areas back in his game, but in order to keep shifts in there, we’ve used him 20 or 30 seconds [on the penalty kill.] I’m sure you know how many seconds that we’ve used him.

On whether Toffoli is more effective on the right side:
I don’t think it matters to him. I think he’s handled it….If he wants to stay in the lineup, we’ve moved him from left to right, we’ve moved him around lines. With Brown being out, it’s given Tanner an opportunity. Pearson and Toffoli have played together before. Jarret’s a steady influence. Opponents, depending on how it matches up. The other night they were playing against the Koivu line and the Getzlaf line, so you’re trying to keep kids away from them. Tonight, we’ll see. We don’t know who their lineup is. We haven’t been informed yet. So we’ll see.

On whether he felt this morning’s earthquake:
Yep. [Reporter: You’ve felt a couple of those before though, right?] Several. In San Jose we used to get them fairly regularly. [It was] I don’t know, the third or fourth one here. Actually, we just had one. We were in Winnipeg. There was then too, I think. Winnipeg or Edmonton. It was on our last trip, anyways. [Reporter: Get those in Viking at all?] No.