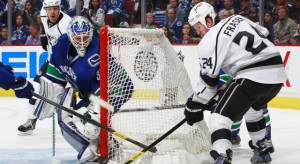 By Zach Dooley
539 Comments
Behind the Scenes

By Zach Dooley
643 Comments
Kings of the Podcast