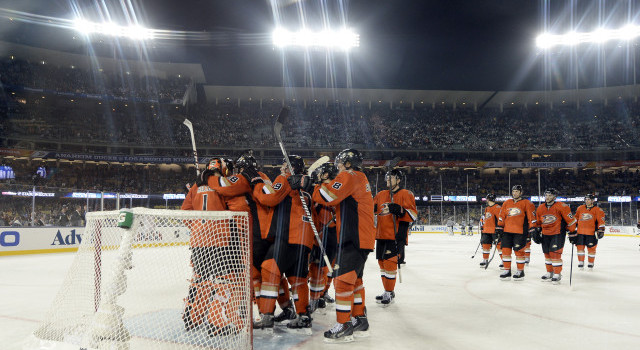 Cam Fowler, on the game:
It was awesome. It was an unbelievable experience and something I’ll remember for a long time. It was really, really cool and I feel lucky to be a part of it.

Fowler, on getting the win:
It’s huge for us. I’ve been saying it all along – I think the reason we were victorious today is because of Hillsie. He stood on his head. They came at us in waves and we definitely needed him. We came up with some timely goals, but to get a victory against that team – twice in a row is tough to do. We’ll take it, but we have to keep improving.

Ryan Getzlaf, on the game:
That was a blast. It was a weird hockey game obviously, but a lot of fun to play in. The fans were great – both sides. It was just awesome. It was a blast. [Reporter: How was it weird?] Well just hard to play in. You’re out there and you can’t find the puck half the time and you’re running a little bit. Our goaltender, obviously, was unbelievable tonight. He made some big saves that kept us in that game.

Getzlaf, on the ice:
You know what, it wasn’t bad. You can only expect so much when it’s 70-degrees out or whatever it was. I thought they did an unbelievable job of getting the ice ready and it lasted throughout the game.

Getzlaf, on if he caught himself looking around the stadium during the game:
Well, I wouldn’t say more than any other game – but it was fun to look around and see all the fans and look up high and see the big building like that. It was cool.

Getzlaf, on if the concerts and other things on the field were distracting:
That stuff was kind of weird at the start. When you first got out there and during warm up and stuff you were able to look around a little bit. Once the game started you don’t notice it as much.

Corey Perry, on the game:
It was a lot of emotion running through your body really. It brings you back to your childhood memories.

Perry, on it being a weird game:
It’s different, that’s for sure. Everybody had a lot of emotion – a lot of people here to be excited for. Everything that you could hope for, it happened today.

Perry, on looking out into the crowd during the game:
I actually kept looking up over center ice for the score clock because normally you try to watch the game on the game on the score clock that you can’t see and you had to turn around to see it. That was the only difference, was something like that. The fans were so far away, but I think everybody knew what was going on.

Perry, on an outdoor game in Anaheim next year:
I hope so. This was a lot of fun. It was a different atmosphere. It shows you can play hockey outside in California.

Jonas Hiller, on getting ready for the game:
I was really happy the way I played the last game, and I want to make sure I’m ready tonight and it wasn’t too tough with the whole thing and everything. There was a big buzz, and I was super excited to play and get a chance to play in front of such a big crowd. Yeah, I got in the game early, got quite a few shots, and then I think we did a really good job, our guys did a really good job blocking out, and I was able to see most of the shots. Did a good job with the rebounds. I think it was a really tough game to play for both sides because the puck seemed to bounce a lot. It didn’t get like too many nice plays. So it was kind of like everything was at the net. And we had to find a way to keep the puck out.

Hiller, on facing Anze Kopitar on the penalty shot:
It seemed like he wanted to go first on thebreakaway. He tried to go backhand and lost the puck a little bit. It kind of felt like he wanted to shoot. I was glad that it was a great shot and I was able to stop it.

Hiller, on how playing outside affected his vision:
It didn’t bother me actually too much. I thought it was going to be a thing, but the lighting was similar to playing indoors. I guess mainly because it’s after sunset, so you don’t have to worry about the sun and getting the glare from the sun. I think on the ice I normally run that according to the lines and where my blue paint is and the crease. So that is still the same in every rink. It didn’t really bother me. So you feel it’s a little different, but it was nothing that threw me off.

Bruce Boudreau, on the crowd:
I thought the energy was fabulous. I can’t even talk now because players couldn’t hear me five feet from me when you’re trying to tell them who is up or screaming on the ice. So I thought the energy stayed pretty well near the end. I think then they sort of settled down a little bit. [Reporter: Would you want to do it again?] If the outcome is the same.

Boudreau, on Jonas Hiller:
Hiller was so good tonight. I think halfway through the third I said it doesn’t matter. They’re not going to beat him. Like I’ve said that on the other side so many times that we’re just not going to beat this guy tonight, and I just had the feeling that no matter how many good looks they had in the last ten minutes,they weren’t going to – they were going to miss the puck. It was his Karma, like he was on.

Boudreau, on Hiller’s focus:
Well, I think it had a little bit to do that he came out and said he wasn’t focused and he got pulled the other night. I think that made him really wanting to play this game on a big stage. You know, I watched him warm-up. He was catching pucks that he was really sharp. And I think he made a couple saves early, and then the penalty shot sort of cemented the fact that he was on his game.

Boudreau, on what he will remember from the game:
Well, we won. I mean, I’ll remember the atmosphere, you know, 54-thousand people, and where we were. You just look pretty well at everybody where the main portion of the crowd and when people say Californians are laid back, I thought they were pretty into it tonight.

Boudreau, on what he said to his players after the game:
Take tomorrow off and get ready for a lot of video on Monday because we made a lot of mistakes. But it’s an emotional game. We came up really emotional as well as the Kings. But once that adrenaline starts to leave your body, you get exhausted. The other team took over, and that’s what they did. But, again, Jonas was there to save the day.

Boudreau, on why he wore a suit instead of a jacket:
I don’t know. I look bad in anything, so it doesn’t really matter.

Boudreau, on the lead over Los Angeles in the standings:
Well, as far as the gap goes, I still think you’re going to have to go through Los Angeles if you want to win the division. I don’t care what the record is or if they’ve been in a slump. They had 50 shots, 40 shots, and 36 shots on us in the three games. Every game is a battle. So I think come playoff time whether they were in 8th, they won the Cup and ended up in 8th. So I don’t think positioning is really going to matter with them whether we’re 19 or 39 points ahead of them. It’s going to be just a battle.

Boudreau, on how this game compared to the other outdoor game he coached in:
The difference was the weather wasn’t great. I mean, it was a pouring rain thing, so I don’t think the crowd was they were loud at the beginning, but I think after while they were just so wet. They were watching and they were glad they were there, but it wasn’t like tonight where the conditions were perfect. The ice was really good. Dan Craig did a marvelous job. You get a chance to sort of move around and coach. Like back then when it was raining I was standing like this shivering, so it was a little bit different.

Boudreau, on Anaheim’s success this season:
Well, timely goals, timely goaltending, a great desire of character to pay the price to be successful – even tonight. That comes when you’re blocking shots and everything. We’re seeing guys limping off the ice and not wanting to miss a shift. I think it’s true character. I know other teams have it and that, but I know we have it in spades. I think it’s something that keeps us going is the desire to be successful. I mean, those guys really want to win.