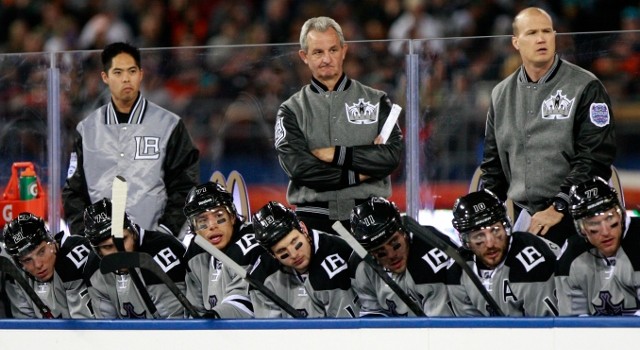 On whether Jonas Hiller was the difference in the game:
Yeah, it was tough chasing the lead. Trouble scoring goals. We have for quite some time, though. One goal and you’re still right there. It’s tough coming back from two. [Jonas Hiller] played a strong game. But we’ve had trouble scoring.

On not scoring on the power play:
I think that manifests from your whole game. I think when you have good opportunities and don’t score, you’ve just got to finish those opportunities.

On whether he took an opportunity to process the surroundings:
Yeah, because you did it…during warm-up. It was unbelievable from where we stood to be able to look out and see everything. We basically started in left field and went all the way around. It was an incredible experience to see all of that.

On the quality of the ice by the third period:
The ice was all right. I mean you guys or anybody that’s watched hockey, there was a lot of jumping pucks and boards and pucks along the boards and things like that. So it was all right. You know what, they did as good as they could, and it certainly wasn’t an issue.

On whether the players’ focus was there:
Yeah, I think it was good.

On switching lines to spark the offense:
You know what, we switched centermen up, not a whole lot. I thought Kopitar had a really strong game. I thought Jeff had a strong game. You know what, those are guys you count on for the offensive side of it. But at the same time you need it throughout your lineup. That’s when you see switching and lines. That’s probably why because I think the energy and all of that was there in the first period, and then I think the schedule got us a little in the second. You see that, then the determination of the group in the third, they bring it on again. It was just tough scoring.

On whether the Kings played physically enough:
Yeah, I didn’t think that was a problem at all. It’s not like they’re running around trying to hit guys. That’s not what ‘physical’ means.

On Anaheim scoring goals by going to the net early in the game:
Jeez, I think we spent a lot of time in front of their net and their goalie. [Reporter: As the game wore on?] Yeah, I think we had — if you just go on shot and quality, I think that we probably had better.