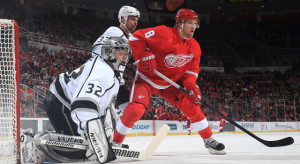 DETROIT, MI – JANUARY 18: Jonathan Quick #32 of the Los Angeles Kings follows the play from one knee while teammate Willie Mitchell #33 battles with Justin Abdelkader #8 of the Detroit Red Wings in front of the net during an NHL game on January 18, 2014 at Joe Louis Arena in Detroit, Michigan. (Photo by Dave Reginek/NHLI via Getty Images)

By Zach Dooley
263 Comments
Behind the Scenes