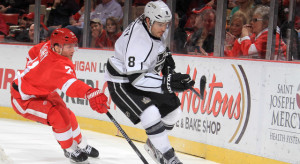 DETROIT, MI – JANUARY 18: Drew Doughty #8 of the Los Angeles Kings digs the puck off the boards as Daniel Cleary #71 of the Detroit Red Wings pressures him during an NHL game on January 18, 2014 at Joe Louis Arena in Detroit, Michigan. (Photo by Dave Reginek/NHLI via Getty Images)

The LA Kings have re-signed defenseman Austin Strand to a one-year, two-way contract extension, carrying an AAV of $771,750 at

By Zach Dooley
208 Comments
All the Kings Men

The LA Kings have signed unrestricted free agent defenseman Alex Edler to a one-year contract. The 6'3 defenseman comes to

By LA Kings Insider
0 Comments
Looking to the Future