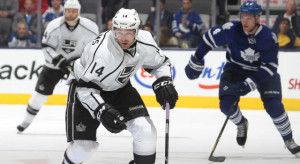 TORONTO, ON – DECEMBER 11: Justin Williams #14 of the Los Angeles Kings skates away with the puck against the Toronto Maple Leafs during an NHL game at the Air Canada Centre on December 11, 2013 in Toronto, Ontario, Canada. The Kings defeated the Leafs 3-1. (Photo by Claus Andersen/Getty Images)

By Zach Dooley
702 Comments
Behind the Scenes