Minutes available alongside a healthier Greene 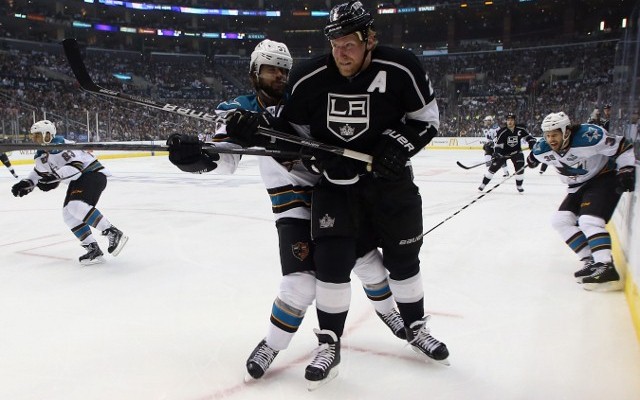 Matt Greene acknowledged that he’s “ready to go” after undergoing elbow surgery over the offseason to remove a staph infection, his second surgery in a challenging calendar year.

The medical procedure wasn’t nearly as serious as the surgery to correct a herniated disc in his back following an injury he suffered in the 2012-13 season opener. He gave a mostly warm response when asked if his back was back at 100%, saying that “It’s getting there, for sure. Right around there.”

The question of how his body will hold up probably won’t be raised as much as the question of who will serve as his defensive partner once training camp opens this week in El Segundo.

Alec Martinez provided strong minutes alongside Greene during the team’s run to the Stanley Cup in 2012, but he played in only 27 regular season games and fewer than half of the team’s playoff games last season, and hasn’t always been in Darryl Sutter’s favor.

Jake Muzzin saw time alongside Greene late in the season, though it was a challenge for them to develop chemistry at a critical time in the year, and Muzzin’s postseason performance didn’t represent the peak of his 2012-13 minutes.

Other left-handed shots that would complement the righty-lefty pairing include six-foot-six Jeff Schultz and six-foot-five Keaton Ellerby, both of whom could form a sizable stay-at-home pairing with the six-foot-three Greene. There’s also the shifty 25-year-old Andrew Bodnarchuk, though he’s a long shot to make the team.

Of course, these projections are based on Drew Doughty seeing the majority of his minutes with Robyn Regehr and Willie Mitchell slotting back in with 2011-12 defensive partner Slava Voynov.

Greene, on how the defense will “regroup” after losing Rob Scuderi to free agency:
I think losing Scuds is huge, but I think with Mitchie coming back into the lineup, I think he’s going to replace a lot of Scuds’ minutes, and also with Robyn having a year in terms of getting to know the guys again, too, and having training camp, and becoming more comfortable with the system and the guys that we’re playing with, I think we’ve just got to kind of plug Rob’s minutes by committee. But I think Mitchie will be a big boost. Getting him back, getting him healthy and having him playing with us, I think it’ll be a big help.

Greene, on his first training camp under Darryl Sutter:
Just getting the feel back for the game, getting sharp on the systems, getting an idea of who you’re going to be playing with, and just start to get into the groove and getting into the grind again. I think we all know what Darryl expects out of guys, and that’s just show up to work, play hard, and do your job.

Greene, on whether he trained any differently this summer:
It’s different. I think once you get older, it’s more about not really doing a lot of the heavy weights like you did before when I was younger, and kind of like the constant pounding. Now it’s more just taking care of your body, and it’s more of a rehabbing-your-body rather than trying to build a lot of strength. I think I’m as heavy as I’m going to be. So just to make sure that you get your body in peak physical condition before the season rather than really trying to put on pounds of muscle. That’s the difference now.