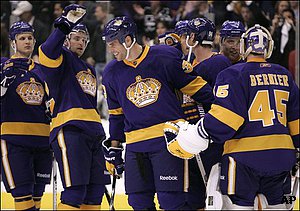 Jonathan Bernier, who stopped 24 of 26 shots in Saturday’s win over Edmonton, will start in goal again Monday when the Kings play at Dallas. The reason?

Of course, the Kings face back-to-back games, with a game Tuesday at St. Louis. What happens, in the St. Louis game, if Bernier gets the win against the Stars?

“Then he might go again,” Murray said. “We’re going to win some games. We’re going to go with a lineup that’s winning. We’ve got to win.”

Well, that answers that… Bernier helped shut out the Oilers for the final 44 minutes, after getting beat in the first period when Edmonton’s Dustin Penner faked a move to behind the net and tucked the puck past Bernier, who had stopping guarding the post…

MURRAY: “It was weird, but the beginning of the goal was a puck-management issue again. We turned the puck over, and we changed (lines). The puck is coming in, on a 4-on-2, and we’re getting a line change. That’s hard. But specifically, the goal there, you’ve got to give Penner credit. There are only a couple guys in the league that are going to make that kind of a play, to be that strong, to get the puck up that fast in a tight space like that. That’s a great shot. Could Bernier have played it a little different, with the post, staying strong side? Yeah, sure.”

Question: Did you think he settled down after that, or after the first period, and that things settled down in front of him?

MURRAY: “It improved. I liked the direction that we were heading with that, with the composure, making plays, and the attitude that we showed. We had good spring in our step. I really liked the way we started to skate in the second and third. Actually, in the first we were skating not too bad. So there were a lot of positives in that game.”