Kings not interested in escalating war of words with Tkachuk

So, Matthew Tkachuk had several things to say about Drew Doughty and tonight’s game. You may have read the story – the one in which he said that he “expected more from [Doughty], honestly, than to go right to the media and start complaining after a loss,” as he told the Calgary Sun’s Wes Gilbertson, before his postscript observation that Doughty is “a skilled guy and everything like that” while casually mentioning the reigning Norris Trophy winner and two-time gold medalist’s two Stanley Cups.

(For clarity, Doughty didn’t “go right to the media” after the loss in Calgary two Sundays ago. I jogged to catch up with him as he was walking from the dressing room to the bus to ask him four questions, the final two of which were about Tkachuk.)

But while several players on the Kings were aware of what Tkachuk’s had said, Jeff Carter, the one player made available to speak with the media contingent at the team’s hotel on Wednesday, chose not to escalate the exchange of words and told reporters that he hadn’t read the 19-year-old’s comments in the latest exchange.

Los Angeles was both questioned and criticized for what had been perceived as a lack of a reaction to Tkachuk elbowing Doughty in the face “in a way that can not be considered inadvertent, reflexive or defensive,” according to the Department of Player Safety’s video that described the reasons for the player’s two-game suspension.

“I think at this point in the year we’re worried about winning hockey games,” Carter said. “You look at the standings, we need to win and that’s the bottom line. I’m not too worried about any other stuff.”

That’s not to say that the previous episode was or wasn’t addressed internally, but in all accounts of the incident, players divorced themselves from emotion when speaking about it publicly. “There’s different types of players and he was just doing his job and fighting for a puck and it happened,” Tanner Pearson said the morning after the most recent Calgary game.

After tonight’s game at Scotiabank Saddledome, the Kings, who are 11 points out of a playoff spot with seven games remaining, will face the Flames at Staples Center on April 6. Should Los Angeles lose tonight’s game, it would mark the first time since the 1985-86 season that they failed to win a road game in Alberta.

Jeff Carter, on Jonny Brodzinski’s first two games:
Yeah, I think Jonny’s looked pretty good the last couple of games. Obviously it’s never easy coming in, especially this time of year when the games are ramped up, but I thought he’s done a real good job. He’s been making plays, you can tell that he has that kind of natural offensive instinct to get in the right areas, to get pucks and getting his shots through and stuff like that so he’s going to be a good player.

Carter, on whether Brodzinski’s style of play reminds him of when he first came into the league:
Shoot the puck every time you can get it to the net. That’s my thing — you’re not going to score if you don’t shoot it.

Carter, on why puck deflections and bounces have hurt the Kings so much this year:
I wish I knew. I mean, both those goals, I don’t know what else you can do on ‘em. But we’ll keep going. It’s kind of the way it’s been going for us lately and we’ll keep battling. 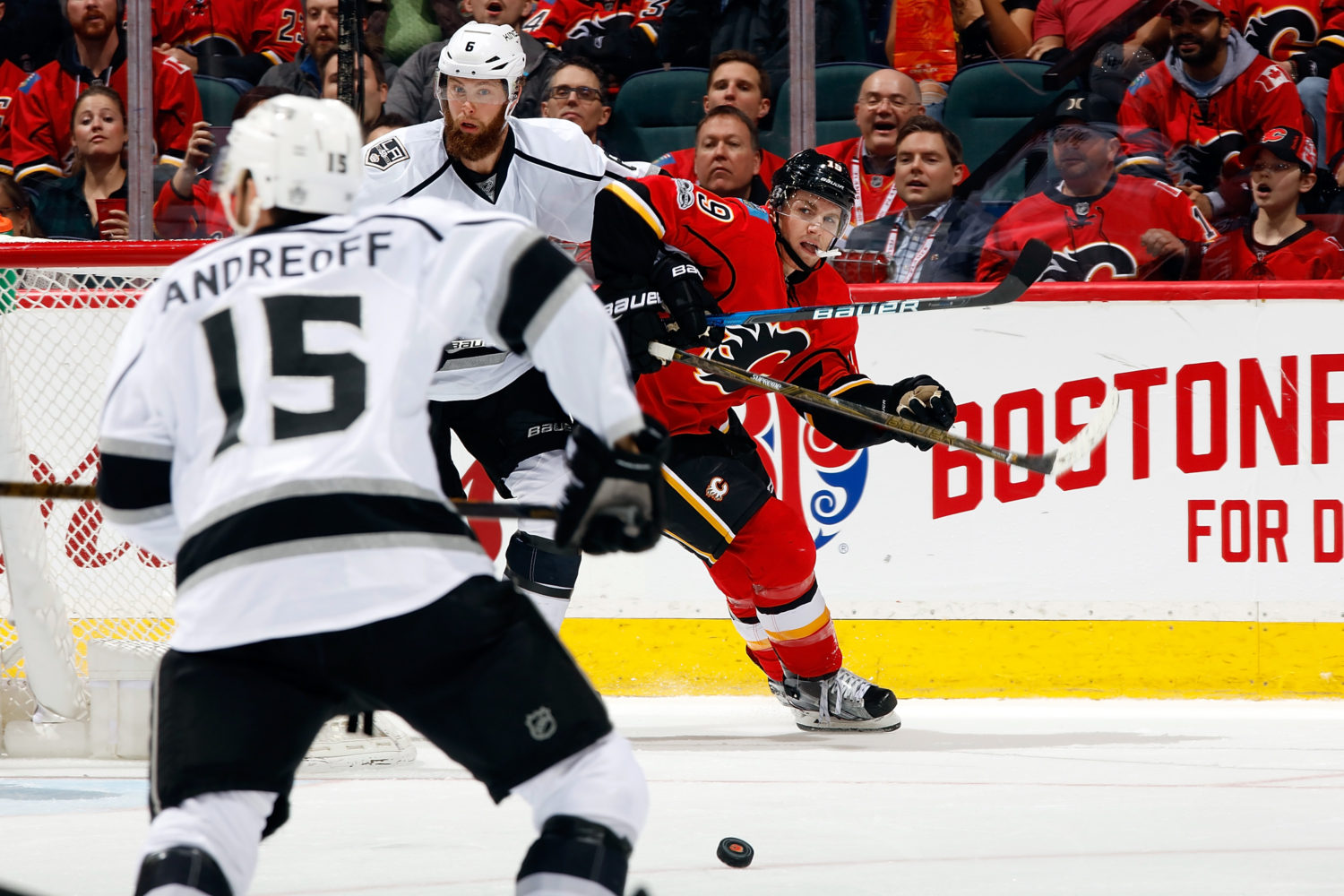