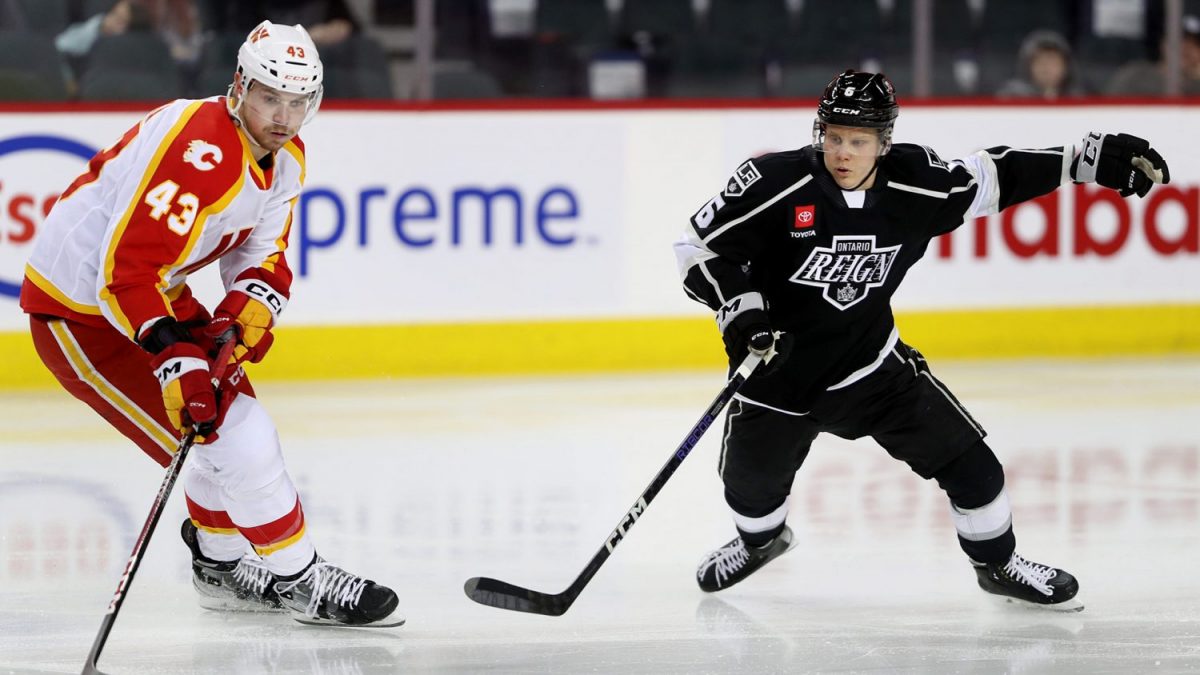 Despite tying the game twice in the third period, the Ontario Reign (20-15-1-1) fell short Tuesday night to the Calgary Wranglers (28-10-1-0) by a 4-3 score in the first contest of a two-game series this week at the Scotiabank Saddledome.

Ontario’s leading scorers TJ Tynan and Lias Andersson each had a goal and an assist, while Austin Wagner scored in his hometown and Martin Chromiak extended his career-long point streak to eight games.

Wagner gave Ontario the first lead of the game at 14:20 of the first when he took a pass from Tynan as the two linemates entered the offensive zone and wristed the puck past goaltender Dustin Wolf. The Calgary native’s eighth goal of the season also came with a second assist credited to Andersson, who has been on the scoresheet with points in five consecutive games.

The Wranglers responded in the second period with a pair of goals to take a 2-1 lead. Emilio Pettersen evened the score at 5:43 of the middle frame by poking a loose rebound past the right pad of goaltender Cal Petersen. The chance was initially waived off, but after a video review it was counted as a good goal.

Later it was Mitch McLain who scored to put Calgary in front for the first time at 14:46 by cleaning up a rebound in front after a long-range shot from the point that was stopped by Petersen.

But Tynan gave the Reign life in the third, tying the game at 2-2 with an unassisted goal 2:57 into the final period. Helped by a forechecking play from Andersson, Tynan stole the puck at the top of the Calgary crease and got off a quick shot to net his sixth goal of the season.

The Wranglers responded quickly to re-take the lead at 3-2 on another rebound goal scored by Radim Zohorna at 5:41.

Ontario wasn’t done, tying the game back up at 3-3 on a goal by Andersson that was set up by Chromiak who sent a pass from behind the net to the side of the crease for another equalizer. Jordan Spence picked up the second assist on the play, which came with just 2:28 remaining in the third.

Calgary had one more in them, however, and a shot by Clark Bishop less than a minute after Andersson’s strike won the game with 1:32 to go.

Wolf earned his fourth win of the season against the Reign with 24 stops, while Petersen suffered the loss after turning aside 31 shots. The Wranglers outshot Ontario 35-27 in the contest and netted the lone special teams goal, going 1-for-4 while holding the Reign to an 0-for-3 mark.

Marco Sturm
On the way his team played in the third period to tie the game twice
After a second period that was not good, I think we bounced back in the third with some good goals but unfortunately some individual mistakes cost us at the end of the game and that’s the tough part.

On the play of Tynan and Andersson of late
For a while now, they’ve been our best players and even today they took charge. They were horses and even in the third period, they got us some big goals.

On coming up short to Wolf and Calgary in all four meetings
I think it was a different story than the first two/three games against them. Today I think it was a different story and I think when you score three/four goals against a team like that, it should be enough. But they make it hard on you and it’s not easy to score but today we found some ways to score and we just couldn’t get the job done.

On Cameron Gaunce, who played his 800th pro game
800 is an amazing number. You can tell, he’s a veteran, he’s a leader. He leads by example and he still goes really strong. I think we should all be happy and not just the team, the teammates, and the organization for what he brings to this team. We wish we would have had a better ending for his 800th, but this is definitely a great milestone for him.

The Reign and Wranglers conclude their midweek series at the Saddledome on Wednesday night with puck drop scheduled for 6 p.m. PST.