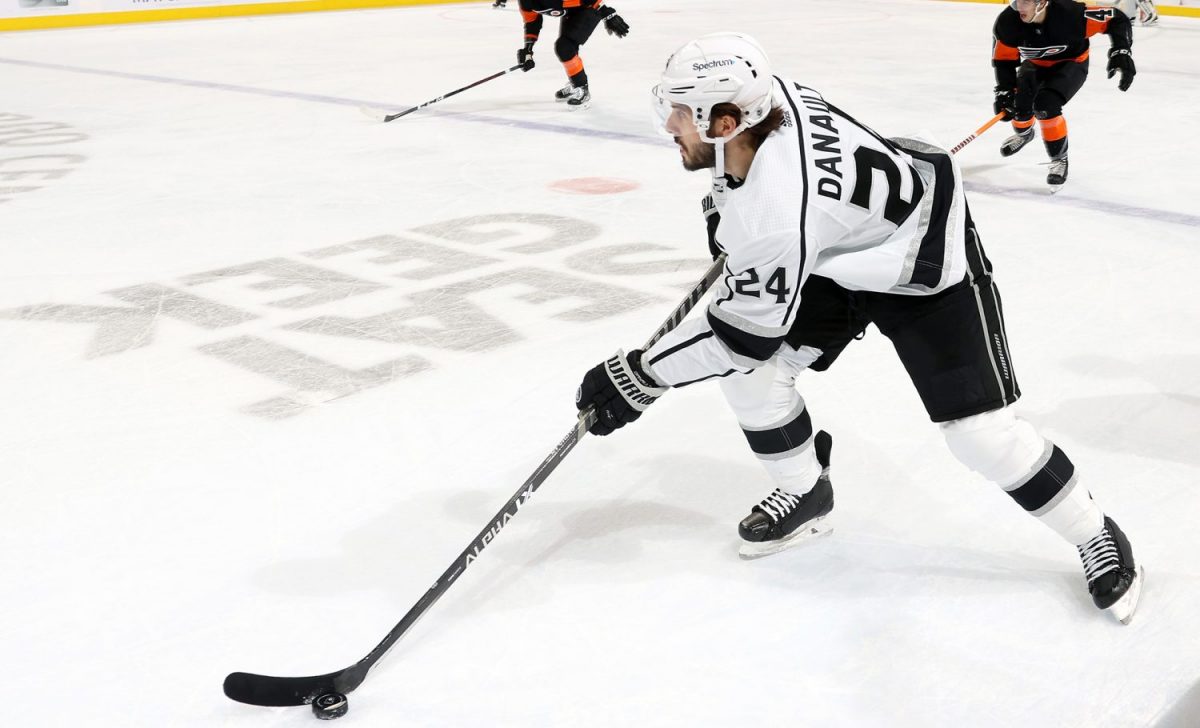 TONIGHT’S MATCHUP: The roadtrip continues for the Kings in Philadelphia, as they conclude their season series against the Flyers.

HEAD-TO-HEAD: Forwards Phillip Danault and Adrian Kempe each scored when these teams met in Los Angeles earlier this month. Forward Viktor Arvidsson had an assist in that game and leads the Kings with seven points (3-4-7) versus Philadephia over the last two seasons, while Danault has five points (2-3-5) in the same span.

KINGS VITALS: Following an off day yesterday in Philadelphia, the Kings held a full-team skate this morning at Wells Fargo Center.

Goaltender Pheonix Copley was the first netminder off this morning, making him tonight’s projected starter against the Flyers this evening. Copley has faced the Flyers once in his NHL career to date, as he made 37 saves on 40 shots against to earn the victory in January of 2019.

Here’s how the Kings aligned during this morning’s skate –

As noted yesterday, forward Gabe Vilardi has returned to Los Angeles and is not expected to be available throughout the rest of the trip. This morning’s rushes give the impression that defenseman Alex Edler will check back into the lineup, in place of defenseman Tobias Bjornfot. Forward Brendan Lemieux did not play last game and appears to be out again this evening in Philadelphia. As always, we see how it goes.

FLYERS VITALS: Philadelphia has split their last six games entering tonight’s action, with a win followed by a loss in that stretch of games.

Per Jordan Hall of NBC Sports Philadelphia, goaltender Carter Hart is expected to be tonight’s starter for the Flyers. Hart has faced the Kings twice in his NHL career to date, carrying a 1-0-0 record with a .926 save percentage and a 2.40 goals-against average.

Per Olivia Reiner of the Philadelphia Inquirer, here’s how the Flyers are expected to line up tonight, with no changes expected from their game against Winnipeg on Sunday –

Flyers in warmups vs. Winnipeg Jets

As Todd McLellan pointed out this morning, the Flyers have had a good stretch of results since they defeated the Kings, posting an 8-4-0 record, including the win in Los Angeles. Since December 29, Flyers forward Travis Konecny is tied for third in the NHL with nine goals. Former Kings draft pick Nicolas Deslauriers is expected to dress tonight on the fourth line.

Notes –
Danault Line, Chances & Role
The chances are coming for the second line, even if they’re not quite going in.

Over the last four games, the trio of Alex Iafallo, Phillip Danault and Viktor Arvidsson has averaged just under six scoring chances per game. Arvidsson was inches away from a highlight-reel goal in Chicago, but saw the post deny what would have been a coast-to-coast effort. Though that average is less than a chance per game below their pace coming into those four games, the goals for and goals against columns read zero for and five against.

Speaking with Arvidsson and Danault today, they feel that the chances have been there over that stretch and both players were happy with the way they’ve handled their defensive responsibilities in that stretch. That doesn’t mean they’re satisfied, though. They’ve set a certain standard for themselves and want to reach it every night, even understanding everyone has stretches like this.

Danault – I think we could be a little bit better, honestly. We can get more chances, be a little stronger in our battles. It hasn’t been bad, but we can definitely be better. We all want to reach perfection, so it’s hard to be satisfied over the last few games.

Arvidsson – I think we try to play the same way every night that’s a big part of our success, we’re consistent in our game. Obviously you’re going to have one or two games off at some point, or a short stretch, but we’re creating chances and we’re not seeing chances against. We take on a lot of defensive responsibilities, and considering that, I think we’re doing a good job.

Arvidsson also pointed out that the line is currently getting a lot of defensive-zone assignments and he’s correct. Over the last four games, they’ve taken 12 draws in the offensive zone, compared to 20 in the defensive zone.

It breaks down to a couple of factors, including their defensive prowess and Danault’s usual regularity of success in the dot. Todd McLellan is also cognizant of the fact that he wants that line to feel good offensively as well, recalling a time in the season when they were carrying the team with offensive production. It’s a balance, certainly, that he’s looking to uphold.

“It’s also our job to make them feel good offensively too, so there’s times where we have to get them some offensive faceoffs and make them feel good about the reward for checking, so there’s a balance there,” McLellan said this morning. “What’s interesting with our team right now is we have 25% of goals out of the lineup [Grundstrom, Kaliyev, Moore, Vilardi] ……so they have to come from other characters, other guys. There is a little bit of pressure on those guys to score but not at the cost of risk and they’ve managed in fairly well.”

McLellan referenced the players out of the lineup currently and as he noted, it’s substantial from a scoring point of view. The second line is an important part of the team’s scoring efforts, but just as important as a part of the team’s matchup and checking efforts. McLellan also noted he was looking for a bit more from Iafallo, with getting his legs going, and felt that he got it against Chicago.

It’s all about balance and the instruction will continue to be playing to win, not playing to score. Despite a few losses, that line has stuck to the gameplan and the hope is that they will continue to do so, which will lead to offensive production.

“We can’t lose sight of what they’re doing defensively against some of the better players in the league, so there’s a balance there,” McLellan added. “Every line has to carry their share of offense throughout the year. There was a segment when they were carrying the team offensively, it was very easy to see. Right now, maybe not as much, but others have to step up and for us to win, that has to happen.”

To Play C or Not To Play C
“They’re they’re interchangeable parts, the way we play, they’re interchangeable on the ice. Turc had played some of this better hockey in the middle this year at the minor league level, especially when we called him up, we wanted him to feel comfortable. Ras is starting to get accustomed to being all over the place. Left, right, center, penalty kill, different lines, he’s a utility man and he’s becoming more comfortable in that role, so it makes sense to do it that way.”

That was Todd McLellan on his young fourth line this morning, when asked about having both Alex Turcotte and Rasmus Kupari on the same line. Both players are natural centers but have experience both at center and on the wing. When united in Chicago, McLellan opted for Turcotte at center and Kupari on the left, with Samuel Fagemo the third man on that line.

What McLellan said above jives with what AHL-Ontario Head Coach Marco Sturm has said, which is that he believes Turcotte’s best games have come at center with the Reign. Being that it was his first game of the season, while Kupari has been up most of the year, it made sense to perhaps use Turcotte in a more comfortable situation. Having both on the ice, though, is a benefit, especially in the faceoff dot, as McLellan added.

“Interestingly enough, during the game, we had to tell them that you have a lefty and a righty, they can each take faceoffs on their strong side, because that wasn’t happening early but it did later on. That’s experience a little bit too and they’ll get it.”

Both players have expressed comfort at both positions and both focused on the emphasis on wall play when discussing playing on the wing.

The Kings instruct their first forward back, typically, to fill the center role, so having both players comfortable with the repsonsibilities at both positions is important, especially for a line of three young players.

Turcotte – I’ve played center a lot more, you have a lot of speed in the middle with the puck, where as wing you make more wall plays, and need to be good at that part of the game. [Playing wing] was a good experience for me and I feel pretty comfortable with both.

Kupari – Wall play is a big thing as a winger, you have to get pucks out in the d-zone, be good there. At center, it’s maybe more responsibility in the d-zone, but I don’t mind that.

With that unit expected to play together again tonight, Turcotte should remain at center. A good first game and now the consistency factor comes into play on night two.

Laffy Taffy
Lastly, Insiders, a quick note on King prospect Alex Laferriere, who was selected as a nominee for the NCAA’s Hobey Baker Award, given to the best men’s collegiate hockey player each year.

Laferriere, a junior forward from Chatham, N.J., is also among the NCAA leaders in scoring with 23 points (10 goals, 13 assists). A three-time ECAC Hockey Forward of the Week honoree this season, Laferriere has added a team-high four power play goals. He has scored several highlight reel goals on the season, including a game-winning goal in overtime at Princeton on Jan. 6 that helped Harvard rally from a 3-0 deficit for a 4-3 win.

You can vote for Laferriere HERE to be included in the award’s 10 finalists, with the vote running through March 26.

Kings and Flyers, tonight at 4 PM Pacific from Philadelphia!