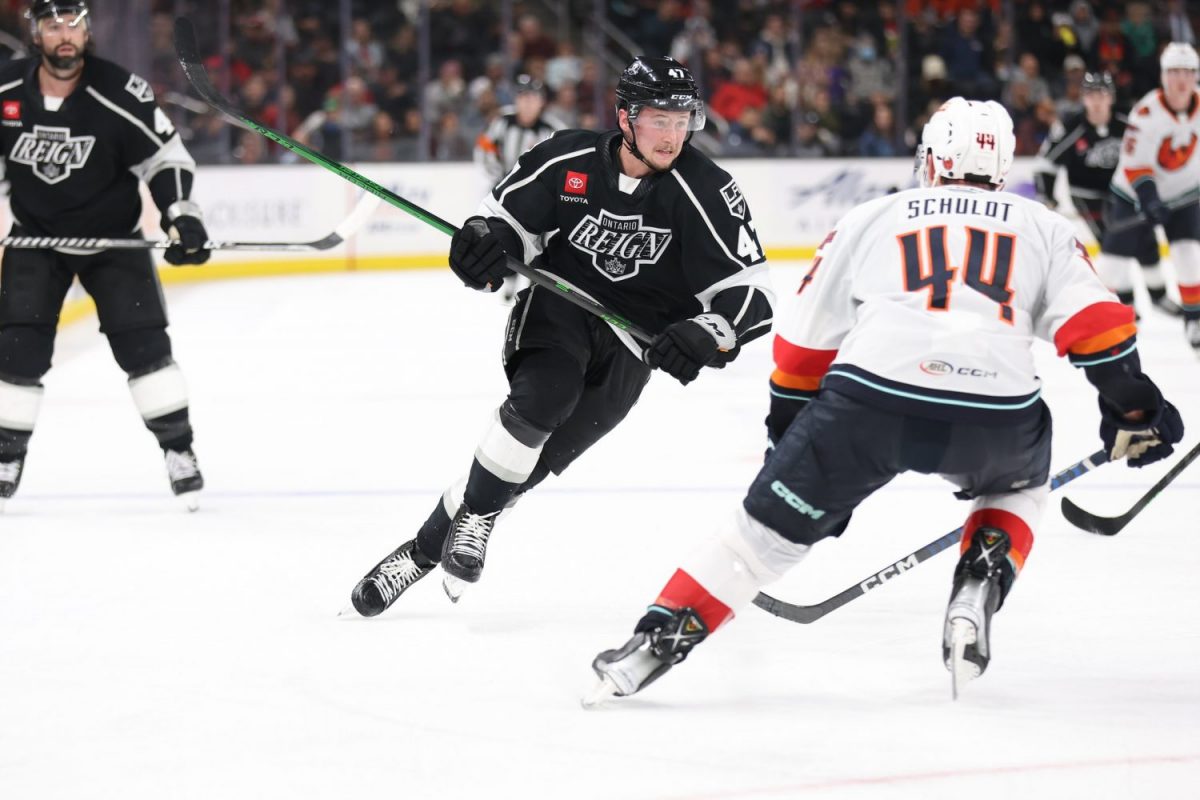 TONIGHT’S MATCHUP: After a midweek trip to Colorado that resulted in a split of a two-game series with the Eagles, the Ontario Reign return home to host the Coachella Valley Firebirds Saturday night at Toyota Arena. Saturday’s matchup will be the first-ever meeting between the two clubs in Ontario and the contest will also mark the halfway point of the 2022-23 season for the Reign. So far the two battles these teams have fought resulted in a one-goal win for each side, with both coming east of the IE at Acrisure Arena. The Firebirds took the opening meeting on Dec. 28 by a score of 7-6, but Ontario responded with a 3-2 shootout win on Jan. 8.

WHAT TO WATCH FOR: While the teams are evenly matched on the defensive side of the puck this season allowing less than three goals per game, Coachella Valley ranks seventh (2.74) and Ontario is just below them in eighth (2.77), the Firebirds bring more offensive power to the table. CV has scored the second-most goals per game in the league (3.8), while the Reign are in the epitome of league average in that category, ranking 16th out of 32 teams with 3.14 per game. The Firebirds are at the top of the Pacific Division with 54 points and have the best points percentage in the AHL at 0.771. Ontario comes into the contest with a fifth-place spot in the standings with 41 points.

LAST TIME OUT: The Colorado Eagles skated past the Ontario Reign in the back half of a two-game series by a score of 5-2 at the Budweiser Events Center Wednesday night. Reign defenseman Kim Nousiainen scored his first North American pro goal in the contest, while Lias Andersson netted his team-leading 14th goal of the season late in a losing effort.

CHROMIAK SHINING BRIGHT: Martin Chromiak assisted on Kim Nousiainen’s first AHL goal Wednesday to extend his career-high point streak to six games. The 20-year-old found the scoresheet in both games against Colorado this week after scoring a goal for the third straight contest Tuesday night. Chromiak’s streak began when he posted his first goal of the season against the Firebirds back on Jan. 8 during a win in Coachella Valley. The run has moved the rookie’s point total into double digits for the season, now with 11 points in 19 games on four goals and seven assists.

SCOUTING THE FIREBIRDS: The AHL affiliate of the NHL’s Seattle Kraken, the Firebirds have been the strongest team in the Pacific Division during their first season in the league. Veteran Andrew Poturalski leads the club in scoring with 39 points in 35 games on 10 goals and 29 assists. His assist total leads the team, while 16 points have come via the power play (2-14=16) and he’s already eclipsed 100 shots on goal for the season. The team’s leading goal scorer is Jesper Froden, who has found the back of the net 21 times which is second-most in the AHL. Froden’s 37 points are tied for second on the team with Kole Lind and captain Max McCormick, who have identical scoring lines of 15 goals and 22 assists. Defender Brogan Rafferty has the most points among Firebirds’ blueliners with 23 on five goals and 18 helpers. In net, Joey Daccord has claimed the majority of the minutes while appearing in 21 games and posting a 2.56 goals-against average and a 15-4-1 record this season.

DUDAS DELIVERS: While playing alongside Martin Chromiak over the past two weeks, Aidan Dudas has produced an identical six-game point streak consisting of eight points on a goal and seven assists. Dudas’ longest run of the season has been highlighted by assists in each of his past six games, including helpers on three of Chromiak’s four goals. Most recently, the Parry Sound, Ont. native earned a helper on Kim Nousiainen’s third-period strike Wednesday in Colorado. In last Saturday’s win over San Diego, Dudas netted his seventh goal of the year and is now just three tallies shy from matching his career-high of 10, which he set last season in 61 games. Overall, Dudas has 17 points this season (7-10=17) while suiting up for all 35 of Ontario’s contests.

LIAS STAYS HOT: With his team-leading 14th goal of the season Wednesday, Lias Andersson found the back of the net for the fifth time in Ontario’s last five games. The Smogen, Sweden native is now tied for second on the team in scoring with 25 total points in 30 games with the Reign this season (14-11=25). Andersson has also taken more of a shoot-first approach since the calendar flipped to 2023, and as a result, he’s moved up to second on the team in shots on goal this season with 87. The attacker is averaging a point per game from the club’s first eight contests of January with five goals and three assists and leads the team with seven power play goals this season.

NO. 1 FOR NOUSIAINEN: Defenseman Kim Nousiainen scored his first AHL goal Wednesday night in Colorado during his 20th career contest with Ontario. The blueliner made his North American debut last spring on April 8 and went on to appear in eight games for the Reign near the end of the 2021-22 AHL regular season. While Nousiainen accounted for two assists in those eight contests last year and another two helpers in 11 outings this season, he didn’t find the back of the net until a rebound came to his stick at the top of the crease off an initial shot by Martin Chromiak on Wednesday. A native of Kuopio, Finland, Nousiainen’s rights were selected by the LA Kings in the fourth round of the 2019 NHL Draft.