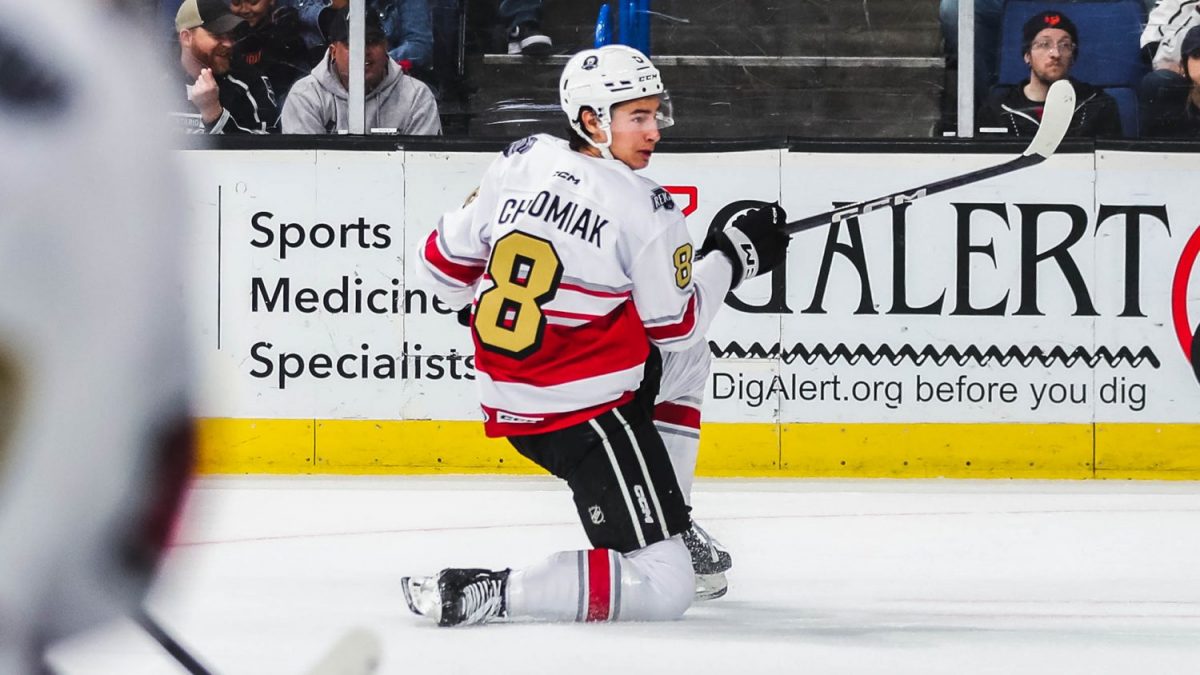 Martin Chromiak’s first pro hat trick wasn’t enough for the Ontario Reign (20-14-1-1) Saturday night, who suffered their first overtime loss of the 2022-23 season at the hands of the Coachella Valley Firebirds (26-6-3-1) by a 5-4 score at Toyota Arena.

Reign captain TJ Tynan also matched a career-high with four assists in the contest, while Jordan Spence posted two helpers for Ontario. Coachella Valley captain Max McCormick scored the game-winning goal at 3:32 of overtime and recorded four points in the contest with three goals and an assist.

More from head coach Marco Sturm and Chromiak below.

Neither team had more than a one-goal lead in the contest, which marked the third straight game between the two teams that was decided by a single strike. Ontario now has a record of 1-1-1 against Coachella Valley this season.

McCormick got the Firebirds on the board early when he scored on the team’s first shot on goal of the game at 1:56 of the opening period.

With Ontario controlling play during the middle part of the frame, Chromiak responded with his first tally of the night at 10:18 from Tynan and Cameron Gaunce to even the game at 1-1.

Chromiak then gave the Reign their only lead of the night with a power play goal at 11:01 of the second, converting a one-timer on a pass by Tynan.

In the final minute of the middle frame, Coachella Valley’s Luke Henman deflected a shot past goaltender Cal Petersen to tie things up at 2-2 with 32 seconds to play as the teams headed into the second intermission.

The clubs went back and forth in the third, each converting on a pair of power play opportunities to force overtime. First, the Firebirds took a 3-2 lead at 3:51 on a goal by Tye Kartye.

Ontario responded at 10:51 when Chromiak netted his third of the night on a feed by Lias Andersson. Tynan recorded the second assist on the play for his third helper of the game.

But Coachella Valley went back in front 4-3 less than two minutes after the hat trick goal when McCormick earned his second strike of the contest at 12:22.

The Reign scored their third power play goal of the game with five minutes to play in the contest on a shot by Aidan Dudas, who also scored with assists going to Spence and Tynan.

Both Chromiak and Dudas have now recorded a point in seven consecutive games, dating back to the last time Ontario was in Coachella Valley on Jan. 8.

The Firebirds had possession for most of overtime and won the game when McCormick scored on a wraparound from behind the net at 3:32 of the extra session.

Joey Daccord earned the win for Coachella Valley with 29 saves in the game, while Petersen made 20 stops for Ontario in a losing effort. The Reign finished 3-for-5 on the power play, while the Firebirds ended at 2-for-4.

Marco Sturm
On tonight’s hard fought game
Our guys played hard. I thought the guys played a good game because we were really into it. We just started off with a really good portion. They scored only one goal in the first period, but I think they came out to play and unfortunately we didn’t end up winning. It was still a big point for us. The energy and the compete level were there. The skating was there. [Coachella Valley] had a long week too. We know how that feels if you don’t play for a week, so it took them some time. Overall, I was very happy with the game today. Our veterans made some mistakes or took some penalties, which we shouldn’t have, but other than that I was happy.

On Martin Chromiak’s hat trick
Chromiak has something a lot of players don’t have. He is a gifted player. He’s very, very skilled and he doesn’t look strong, but he actually is very strong on the puck. He knows how to put some pucks in the net. He still needs some time but again, he’s getting better every week and he’s getting more comfortable too. I think if he keeps going like that, he’s going to have a bright future ahead of him.

On adding Aiden Dudas to the top power play unit in the third period
I don’t know. It was instinct. [The top unit] stayed out there for a while. I thought Dudas has done a good job lately as bumper and I had a good feeling about that unit. I wanted to change, but maybe just one [player] and not the whole unit, and it worked.

Ontario travels to Calgary this week for a pair of games north of the border against the Wranglers beginning Tuesday night at 6 p.m. PST.